The pieces will range from $35 for a basic T-shirt to $140 for outerwear and embellished dresses. 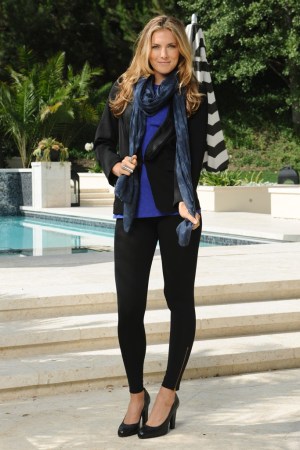 LOS ANGELES — The Jenner-Kardashian fashion family is about to get even bigger. Matriarch Kris Jenner will launch her own line for QVC, Kris Jenner Kollection, during the channel’s live New York Fashion Week broadcast on Sept. 8.

Previewing the line at her Hidden Hills, Calif., home last week, Jenner descended from the spiral staircase in a burgundy knee-length dress from the collection with a drawstring waist and cutouts along the arms. It was only 8 a.m., but there was already a small army of non-family members in the house, and it wasn’t even a taping day for the E network show “Keeping Up With the Kardashians.”

This story first appeared in the August 16, 2011 issue of WWD. Subscribe Today.

“I have hair and makeup here today, and my partner Noelle, who’s in charge of brand management for Jenner Communications; Jesse, who does my son’s stuff; Karen, my personal assistant; Monica, who styles the line, and a couple of people moving my closets around, because I’m building a new one. So this is a really calm morning in the Jenner household. I only have 35 people here running around like crazy kooks,” she said calmly.

The reason for the new closet is Jenner’s first solo venture for QVC, after selling exercise equipment on the network with her husband, Bruce Jenner, in the early Nineties and the launch earlier this year of K-Dash, the contemporary line from her daughters Kim, Khloé and Kourtney, whom she manages.

“I’ve wanted to do a collection my entire life. I love the pieces that I wear, and they’re very successful for me, for my lifestyle,” explained Jenner of her uniform staples such as black leggings, a crisp white shirt and a black blazer, all of which will be available in the line. “I spent the first half of my life being a mom, having six kids, so now I like to look good, and I’ve learned a lot in my 50-some-odd years of trial and error. This is a culmination of everything that I love that’s easy, with a few pieces thrown in for night and cocktail because every girl needs something to go out in.

“When something’s well planned out, then it makes it happier when I begin my day, because I know exactly what to wear,” she continued, pointing out that the line lets women add their own accessories or one of her patterned scarves to spice things up. Jenner’s other signature accessory, big earrings, is something she hopes to add to the line eventually.

The Tiger J-manufactured pieces — five of which will make their debut on Sept. 8, with more to come in an October show — will range from $35 for a basic T-shirt to $140 for outerwear and embellished dresses.

After Jenner made a quick wardrobe change, she rejoined the crew on the pool patio in a burgundy satin-finish trench over a white shirt and leggings from her line, paired with a black tie she borrowed from her first husband, Robert Kardashian, 35 years ago.

“This trench is my favorite piece. You can wear it during the day with riding boots or booties and dress it up at night with a beautiful black dress underneath with heels,” she said. “One thing I love about the clothes is that they have a great deal of style but they are forever pieces, and the other is they are so well made. You want your clothes to stand the test of time if someone is going to spend a lot of money on an item.”

Jenner is keenly aware that for her core audience of “Keeping Up With the Kardashians” fans, accessible price points were key, although some of her items fall into the contemporary and designer range for QVC.

It’s an area where Doug Howe, QVC’s executive vice president of merchandise, planning and sales, expects to see some advance buzz driving online sales, as well as some crossover between K-Dash and the Kris Jenner Kollection.

“It’s a first for us to have mother and daughter selling their own lines,” said Howe. “We have been happy with the K-Dash business, and the girls, being so social-media savvy, have driven significant amounts of e-commerce prior to their show even airing, so I suspect that trend will continue with Kris.”

“We are constantly getting e-mails and tweets about where to get our clothes, so finally I can send fans to QVC to buy exactly what we are wearing, because these are all the pieces I will be wearing next season,” said Jenner.

As for brand extensions, Jenner said, “Never say never.” She envisions her family expanding its design reach over the next five years.

“Where we are going with all of this is to be very active in the fashion world,” Jenner said. “I think to be designing clothes and to expand that into home and children and jewelry and accessories…that’s where I see us going, to a place where we can keep evolving as designers and giving people a little of our own personalities. All our lines combined hit every age demographic and body type. It’s a great one-stop shop.”