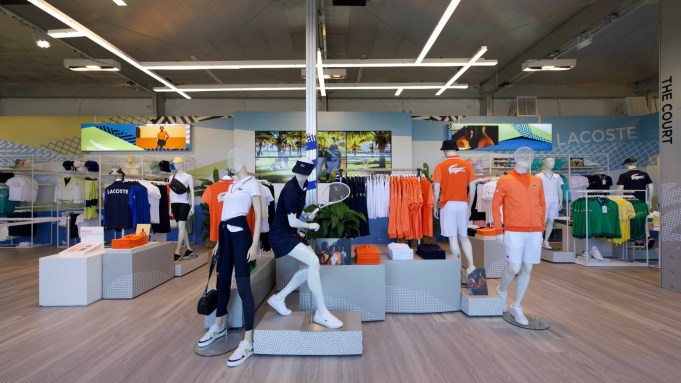 Lacoste is doubling down on its tennis heritage by creating an experiential extravaganza in South Florida for the Miami Open.

Over the next two weeks, the brand, which is the tournament’s official outfitter, will unveil a series of immersive retail activations called “Shatter The Court.” The initiative includes a three-story boutique, a customization station and a lounge at Hard Rock Stadium, where the event is being held. Lacoste has also created a collection in partnership with LeBron James’ Unknwn store.

Connecting all of Lacoste’s events is the Shatter The Court branding, which is designed to embody the fact that “in sport and life, the barriers and limitations that hold us back must be shattered in order to reach new heights,” the company said.

Robert Aldrich, chief executive officer of Lacoste, said the initiative is the most elaborate the brand has done to date. “This is not the first tournament we’ve sponsored, but we’ve never put on an activation like this before,” he said.

He said the brand has built a very large tent featuring what he described as high-impact graphics located right inside the entrance to the stadium. Although it is temporary and will only be open for two weeks, Aldrich said it is “extremely well done. It’s probably the best-looking tennis store you’ve ever seen. It’s immersive and highly unusual for an on-site retail space, and it’s particularly unusual for tennis” which isn’t known for its elaborate retail spaces.

Specifically, the boutique is offering the exclusive Lacoste Miami Open Collection on the first floor for attendees to shop, along with the brand’s technical player gear.

On the second floor is the Atelier Lacoste and custom station where patches and vinyl graphics will be available to heat-press onto select apparel in select locations including right or left sleeves, below the collar or on the chest opposite the brand’s signature crocodile logo.

While they’re waiting for the customization to be completed, shoppers can scan a QR code to sign up for Community, a platform that will offer details relating to all of Lacoste’s involvements at the Miami Open, both at the stadium as well as at the Unknwn store. It will also let them know when their products are ready to be picked up.

Shoppers will also be invited to wait at the third-floor lounge where they can sip a cocktail and grab a snack. The lounge, which is being called Chez Rene after the brand’s founder, Rene Lacoste, will also be televising the games. Aldrich said the lounge, which sports a “very Miami” vibe, is intended as an ode to the founder and the brand’s heritage.

At Unknwn, Lacoste has reimagined the brand’s full-size basketball court by converting it to a special 12 x 6-meter touch tennis court where visitors can use foam balls to try their hand at the sport. In addition, an exclusive Lcste Unknwn apparel collection has been created for the event that is collegiate-inspired and intended to capture the energy and retro nostalgia of university life. The collection of hoodies, T-shirts, sweatpants and shorts will be available at the Unknwn Miami store during the event as well as online.

Aldrich said Lacoste worked with Unknwn last year when it introduced a special Ricky Regal Collection by Bruno Mars. “They were one of our exclusive partners for the collaboration,” he said. And because of their location in the heart of Miami, it was a no-brainer to partner again for the tennis event. “It’s a really novel way to expand the activation beyond the Miami Open site,” he said.

It also represents Lacoste’s mission to introduce the sport of tennis to more people. “You may not think of a cool street store” like Unknwn as the natural partner for a tennis event, “but this is where tennis is going,” Aldrich said. He cited other similar partnerships with Awake New York, a streetwear brand founded by Angelo Baque that reimagined sport-inspired archival pieces from Lacoste’s history, and the new collection with Minecraft, a sandbox video game. “We’re now playing with street brands, gaming and the metaverse,” Aldrich said.

In addition to trying to appeal to a younger, more fashion-forward customer with these partnerships, Lacoste is also working to expand its reach with women. It recently signed tennis star Venus Williams as a global ambassador to cater to the women’s contemporary market.

Overall, Aldrich said Lacoste saw business start to pick up last year around this time and the momentum has continued into this year. He said overall sales were above projections in 2021 and that 2022 is starting off strongly as well.

“Our business is extremely robust,” he said without providing figures. “Customer demand is not the issue, but keeping up with that demand is.”

In addition, plans call for renovating the Lacoste Atlanta store this year and relocating the unit in Aventura, Fla., he said. “We’re being very active in the market in response to our really strong business.”

The Miami Open runs through April 3 and although many of the sport’s top players, including top seed Ashleigh Barty, Naomi Osaka, Rafael Nadal and Novak Djokovic, whose vaccination status makes him unable to enter the U.S., are not participating, it is nonetheless considered one of the U.S.’s top tennis tournaments. Djokovic is an ambassador for the Lacoste brand with a deal that runs through 2025 and he is the face of its Tournament Collection.