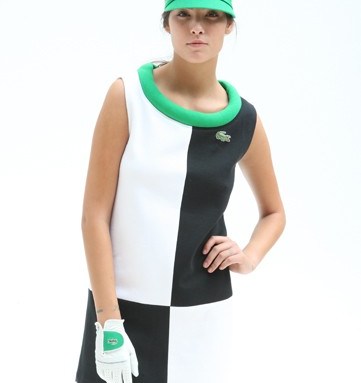 Lacoste’s spring show at Bryant Park TODAY will include a younger, more fashion-forward line, with bold splashes of color, a slimmer fit and a more dramatic crocodile.

The line doesn’t have an official name, but is being dubbed Red! because of the logo that combines the name Lacoste and the iconic crocodile with a red exclamation point. Lacoste will likely roll out its own stores specifically for the line, though details are not complete.

“As a company, we totally agreed it was the time to have a new segment that was younger and sharper and more fitted, but definitely still Lacoste,” creative director Christophe Lemaire said. “We’re not reinventing the brand, just appealing to a younger consumer. Lacoste has a unique identity where it attracts so many different ages, and this is more proof that Lacoste can be for everyone.”

Wholesaling from about $40 to $80, the line targets 18- to 25-year-olds. The collection will have a soft launch for spring in 50 to 100 doors, including Lacoste’s own retail stores and The Rail at Nordstrom, although the new collection will likely be housed in different areas of the stores than the existing Lacoste offerings. The company declined to project the new line’s wholesale volume.

The spring collection is “very Sixties, very Mod, but with a golf twist,” Lemaire said. The palette includes a bright green, in contrast with the softer muted tones in the club line, and a bold Mod check. Each collection will have its own inspirations, though, Lemaire said, already in the mind-set of designing for a younger, more fickle group.

The rest of the Lacoste spring collection, including the upscale club line and the traditional sportswear, will be more muted. The club line “is more subtle and sophisticated in color and fabric” with a rainbow of neutrals, and the sportswear line “is very sunny, let’s-go-to-the-beach, with all these sunny watercolors in melons and sorbets,” Lemaire said.

The mood of the show will be “South of France, Italy, Mediterranean vacation, with pine trees and crickets chirping and feelings of being on a private beach,” Lemaire said. “It’s all a bit dreamy.”