The company will also create a consumer collection that mirrors the official outfits. 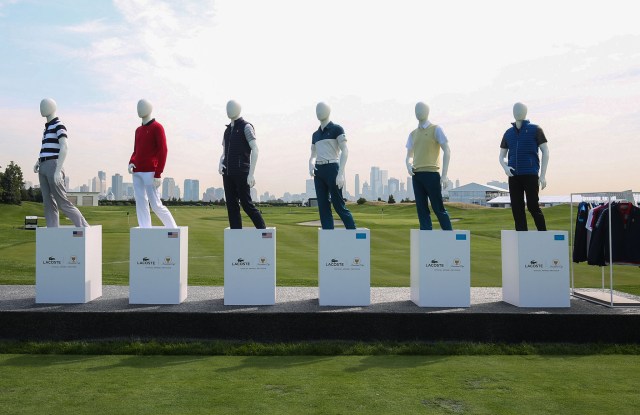 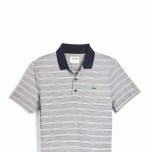 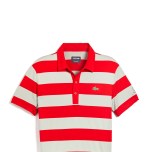 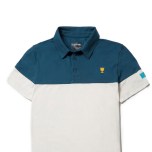 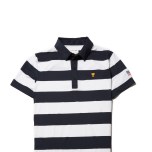 Lacoste is going tee-to-green for its upcoming Presidents Cup partnership.

The French brand famous for its crocodile logo on Monday teamed with the PGA at the site of the tournament at Liberty National Golf Course in Jersey City, N.J., to officially preview the uniforms it created for both the U.S. and International teams. This marks the first time in the tournament’s history that one brand has provided apparel for both teams.

The U.S. team’s outfits draw their inspiration from the American flag and feature a red, white and navy blue color palette. The International team will sport blue and gold, colors that are found on the Presidents Day team flag.

Lacoste created uniforms for all days of the competition as well as for the opening and closing ceremonies. Each piece is embroidered with the Presidents Cup trophy and team flag.

Joëlle Grünberg, president and chief executive officer of Lacoste North America, said that in addition to the official outfits that the teams, captains, caddies and staff will wear, the company has created a capsule for the public that “mirrors” the official collection.

The polos, T-shirts, trousers, outerwear and hats will be sold at the Lacoste stores, on its web site and at other select wholesale partners starting in early September. “It’s being shipped right now,” she said. The line will also be carried in a 20,000-square-foot retail space at Liberty National during the tournament, slated for Sept. 26 to Oct. 1. Prices will run from $50 for a hat to $98 for a men’s polo.

Grunberg said the capsule will be in stores until the first week in October.

Lacoste’s move to become the official apparel provider of the Presidents Cup through 2025 is part of the company’s move to reinforce the brand’s sports legacy.

Best known for its tennis tie-ins, founder Rene Lacoste’s wife, Simone Thion de la Chaume, was an avid golfer, as was their daughter, Catherine Lacoste, who won the U.S. Open tournament in 1967 as an amateur and was nicknamed Kid Crocodile.

Grunberg said that since announcing the sponsorship last October, Lacoste has seen an uptick in interest in its golf attire. “It’s really helped legitimize the brand in golf, which is a strong piece of our DNA,” she said.

She also said the company is hopeful that Daniel Berger, a golf professional who signed on recently to be a Lacoste ambassador, will be chosen to play in the Presidents Cup. “He’s number four in the U.S. now and there’s a good chance he’ll be selected for the American team,” she said. “That would be a huge asset for our business. We’re crossing our fingers.”

The Presidents Cup is a team match competition featuring 24 of the world’s top golfers — 12 from the U.S. and 12 from around the world, excluding Europe. It’s held every two years, and since 1996 has alternated between the U.S. and international venues.