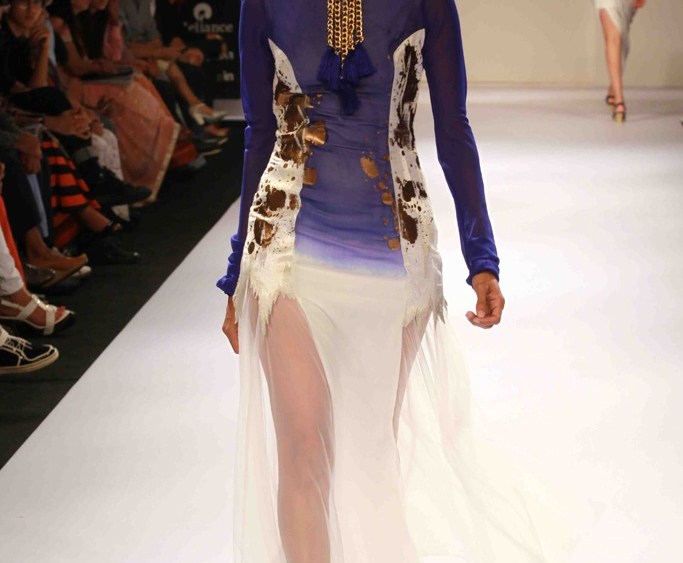 MUMBAI, India — Lakmé Fashion Week closed here with not one, but two collections showing simultaneously to emphasize the event’s focus on young designers.

It was a new twist on the week, which usually has been closed with a show by an established designer. This season the finale was of collections by Kallol Datta and the husband and wife duo Pankaj & Nidhi. Bollywood star Kareena Kapoor showcased an outfit for each of the designers, which generated intense media interest for the event.

“The younger lot need more acknowledgement,” said Anjana Sharma, director of fashion at show organizers IMG Reliance, who has been spearheading change throughout the event.

The focus on resort and festive wear for the current season appears to have settled into the cycle of business, and instead of hand wringing and confusion, designers are welcoming that focus. With an eye on the fast-growing domestic retail market, designers said that their business is performing well thanks to getting an inventory into stores just before the start of the festive and wedding season, which begins in September and October and includes the important festival of Diwali that spurs buying, gift giving and family functions and parties.

LFW’s focus on young designers continued this season, as did the injection of Bollywood glamour with celebrities showing up both on the runways and in the front rows. Six years ago, Swapnil Shinde got his first break among the young designers at LFW. This season, he was one of two prime-time designers in a DHL-sponsored show Monday that featured designs with wings using stiff sequence sheets combined with soft, flowing chiffons, georgettes and crepes. “I want people to think when they see my designs,” he said. “For me, the fashion week is about expressing your creativity.”

Bringing in new concepts has also meant more international styles and materials at fashion week. “Fashion in India is becoming borderless and more and more global,” said R.S Subramanian, country manager, India, DHL Express, which has been sponsoring a show at LFW for the last six years, part of a global agreement with IMG. “What we’re seeing now is a range that goes from classic Indian to cosmopolitan, the cuts are far more daring than they ever were. You can see the way this runway fashion is translating to the streets as well — it is obvious in the way people conduct themselves, in what society is deeming more acceptable as it becomes more open,” he said.

While designers complained about the lack of buyers, others like Pia Pauro had different experiences. “I had my first showing ever at LFW in March and it has led to business worth more than 10 million rupees [$181,000],” she said. “It has also led to business from Brazil and other places, which has been great. It’s only getting better.”

Trends again focused on bright colors. “Forget the forecasts, we’re simply a country that loves colors,” said Sharma. Layering was also a strong theme, as were asymmetric cuts, with the asymmetry focused more towards the middle and the end of the garments. Outstanding among these were Payal Khandwala and Vaishali S.

Another standout collection was by Aniket Satam, whose label Aniket combined shades of a sheer white and cobalt blue with translucent georgettes and raw silks, viscose georgette and cotton jersey with gold foil highlights reminiscent of blue skies mixed with clouds. “It is important to put in a lot of thought and have absolute clarity in what you want to create,” he said.

Although there was a focus on Indian textiles, crafts and motifs, young designers such as Ritika Bharwani were unapologetic about their entirely Western collections using jersey, nets and shimmer foil. Bharwani showed in the alternate Talent Box area located in a separate building.

Accessories also had a strong showing during fashion week.“With gold price at an all-time high, women want to experiment with fashion jewelry. There has been a trend shift,” said Felix Bendish, who showed embroidery neckpieces.

The 13-year-old Lakmé Fashion Week featured 86 shows and, in addition to young designers, there were a string of established ones showing, including Wendell Rodricks, Neeta Lulla and Krishna Mehta. Anita Dongre’s show featured her new jewelry line.

But while designers and others observed the changes at the event, they pointed out the continuing confusion and repetitiveness on the runway. Designer Abhishek Dutta, who showed his collection Monday, said, “There is a need for fashion but it’s as if there’s a lack of clarity about what people and the designers really want; the fashion ignorancies are still there. There aren’t enough common elements in most designs, or work with color forecasts.”

Other designers feel that this confusion will ebb with time. Sujal Shah, former head of fashion, India and vice president for IMG, observed, “Individual styles are still developing but people are getting more confident and evolving their own styles.”

Evolving, too, is the whole idea of a larger focus. As Sharma observed: “We’re looking at the designers and saying, ‘Is there a legacy in place?’ Many of the designers who are serious players should think about leaving a mark by building fashion houses and making a strong play for the future.”