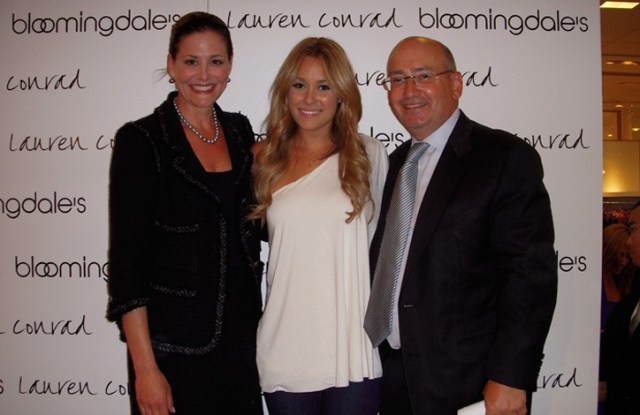 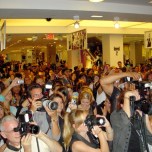 When 500 screaming fans pack the second floor of Bloomingdale’s, it must be for a good reason.

Last Wednesday, the fans were there to get a glimpse and maybe even a signed photo of “The Hills” star Lauren Conrad, who showed up for an in-store appearance at the New York flagship. Bloomingdale’s started carrying the contemporary collection at the store in June and its already strong performance since stirred the store to create a small Lauren Conrad area prominently placed across from a Nanette Lepore shop on the second floor.

“The sell-throughs have been fantastic,” said Frank Doroff, vice chairman at Bloomingdale’s, who seemed just as pumped about Conrad’s appearance as all of her camera-phone-wielding fans lined up on the second floor. “We got it in and sold out immediately. We can’t get the merchandise on the floor fast enough. It is, by far, the best-selling celebrity line we have. It’s so much better than I thought it would be.”

The appeal, Doroff said, is that the forgiving jersey fabric and the fit of each piece look good on a wide range of body types. The leggings, which retail at $57, sell out the fastest. Now, he said, he is working with Conrad to create a larger line with more fabric offerings. Conrad said she is already experimenting with silk chiffon and burnout jersey for a future collection.

Bloomingdale’s started selling the brand this week in its SoHo store and plans are in the works to deliver it to more units across the country.

While Kitson store owner Fraser Ross has been making a lot of noise in the celebrity weeklies about how he dropped the line after sales slumped and Conrad declined do an appearance, the actress said that it’s appearances like the Bloomingdale’s one that give her the feedback she needs to keep going.

“I love meeting the customers and seeing what they buy,” she said. “I’ve learned a lot from them.”

Retailers from Holt Renfrew to ShopRapunzels.com, the Web store for Rapunzel’s Closet stores, have also said the collection has been selling well.

“Lauren Conrad has done very well for us,” said Juliette Louis, Web manager of ShopRapunzels.com. “Our customers love the easy wear and versatility of her pieces. The cuts of her items are fresh but simple. They fit well and have comfortable fabrics, and she kept her color palette relatively muted for extra versatility.”

A graduate of the Fashion Institute of Design & Merchandising in Los Angeles, Conrad said she has wanted to become a designer since she was six years old. She said while “The Hills” and an internship at Teen Vogue have enabled her to launch her fashion career, she will most likely not do another reality TV show.

“It’s hard for me to bash being what people call a ‘celebrity designer,’ since it created this opportunity for me in the first place,” she said. “But, after ‘The Hills,’ there will be no more reality TV for me, and I can’t act, so it’s not like I would go into acting. I want to keep concentrating on my line and work at making it bigger and better every season.”

Conrad said she hopes to grow her business to eventually include a full product range, including handbags and accessories.

“I tried bags once. They were fun to do, but very hard to keep up with,” she said. “I would like to try them again, maybe in some kind of a collaboration.”

Just after the appearance ended, Conrad’s camp confirmed the leggings had sold out, and so had the cream-colored, one-shoulder top she was wearing that day.

“They would have been able to sell even more product if everyone hadn’t trampled the department,” said Bruce Ross, a retail and sales consultant working with Lauren Conrad. “But everyone was very pleased with sales.”

This week, Conrad is manning her booth at ENK’s Fashion Coterie, where she plans to meet with retailers to gather feedback on her spring collection. The Lauren Conrad collection, which wholesales from $18 to $140, is sold in 500 stores worldwide, including Holt Renfrew, Fred Segal, Planet Blue, Shopbop.com and Nordstrom.