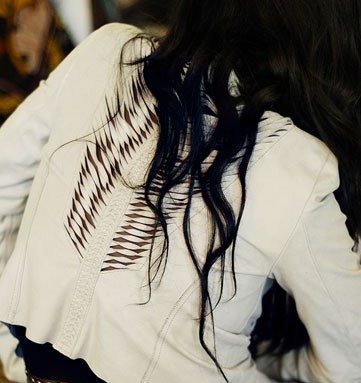 Grai, Mike & Chris, Skingraft, Illia, Ventidue, Barlow, Cassandra and Krys-N-Jack are just a few of the labels leading the vanguard in cuttingedge leather that is dominating the streets from London to Tokyo—and they all hail from Tinseltown.

Even Rick Owens, whom many regard as the father of louche leather, got his start morphing supple skins into deconstructed decadence in a studio located off a seedy strip of Hollywood Boulevard, before decamping to his current base in Paris.

“L.A. is the new frontier,” declares Eveline Morel, owner of a boutique called EM & Co., which carries Ventidue and Krys-N-Jack. “It’s a medium that hasn’t been pushed to the max.”

Until now. In the hands of several Los Angeles designers, often working steps away from some of the country’s top leather factories, rugged animal hides are transformed into luxe, innovative, pliable material that can be draped and molded easily on the body. Krysta Henry and Jacquetta O’Dell meld their passions for leather, carpentry and metalsmithing into Krys-N-Jack’s patchwork tube dresses and hinged miniskirts (think Pebbles Flintstone meets the Tin Man).

John Murrough, the designer of Illia, adapts the popular layering trend for leather by creating frocks that can be slipped over turtlenecks. Mike & Chris, meanwhile, uses snake print embossing and garment washes to give lambskin the texture of tree bark. And after thinning skins to a thickness of half a millimeter, Grai adds a metallic glint.

“That’s the one thing I learned in Paris: not to try to treat [leather] as precious,” says Maya Yogev, who interned with Owens in Paris before launching Grai in 2007.

Another thing that local leather aficionados have done is to substitute leather for jersey or silk in dresses, tank tops, pull-on skirts and other easy sportswear pieces.

That laissez-faire attitude with fashion stems from the city’s hodgepodge of people coming from all walks of life—and often in flip-flops in the middle of the mild winters.

“It’s a California ease,” says Cassandra Smith, designer of Cassandra. “You can walk into any restaurant with jeans and a leather jacket.”

Barbara Rosin couldn’t have imagined sewing strips of black leather onto light gray jersey for a peekaboo coatdress in her hometown of Verona, Italy. Though Verona is recognized for its world-class tanneries, the city in northeastern Italy doesn’t cultivate emerging avant-garde designers the way Los Angeles does. That’s why Rosin moved to California to launch Ventidue this spring with her sister, Elena.

“The mind is completely open,” Rosin says, adding that Angelenos “already get the fantasy.”

Indeed, the fantasy is lived every day. Taking advantage of being nestled in the world’s entertainment capital, Cassandra dropped its rock-chic purses and jackets into the arms of Penélope Cruz, Rihanna, Kristen Stewart and Rebecca Romijn. At Skingraft, Fall Out Boy bassist Pete Wentz snapped up the bomber jacket enhanced with wool shearling around the neck and studs dotting the back of the collar, in three different colors for $900 a pop. Will.i.am from the Black Eyed Peas, another Skingraft fan, scooped up 16 of the $180 leather holsters.

Still, Katie Kay, who landed in fashion as Skingraft’s co-designer after a stint as a belly dancer with an avant-garde circus, believes leather shouldn’t be hoarded only by provocative performers.

“Everyone needs a good leather jacket,” she says, “regardless of whether you’re a rock star or a Midwestern soccer mom.”