First, they represented the United States in the 2019 FIFA Women’s World Cup in France, arriving as returning champions and retaining their title. The second milestone is launching Re-inc, a purposeful lifestyle brand offering streetwear pieces for men and women.

“We created this line because streetwear is what we know. It’s what we wear every single day,” said Press, who serves as co-chief executive officer with her USWNT teammates. “And as females, we found that most streetwear is made by men and made for men’s bodies. We definitely wanted to separate masculinity and femininity from male and female, and we wanted to create this line that moved across the spectrum freely so that everybody could express themselves.”

The launch came after the 2019 World Cup and included an oversize white T-shirt for $125 and a cropped white T-shirt for $75 that both say: “Liberté Défendez” with a backward ‘e,’ which is the brand’s subtle branding and call to questioning any word or moment. The phrase translates to “Liberty, Defend,” nodding to their World Cup title defense and also plays on the French phrase “Liberté, égalité, fraternité” that means ‘Liberty, equality, fraternity..

The second drop, which launches today, is a capsule collection comprised of hoodies, sweatshirts, T-shirts, crew necks, sweatpants and sweat shorts, biker shorts and socks in dusty white, navy, and maroon color palettes that are loosely inspired by “the World Cup and our representation of the country when we’re playing,” said Press. 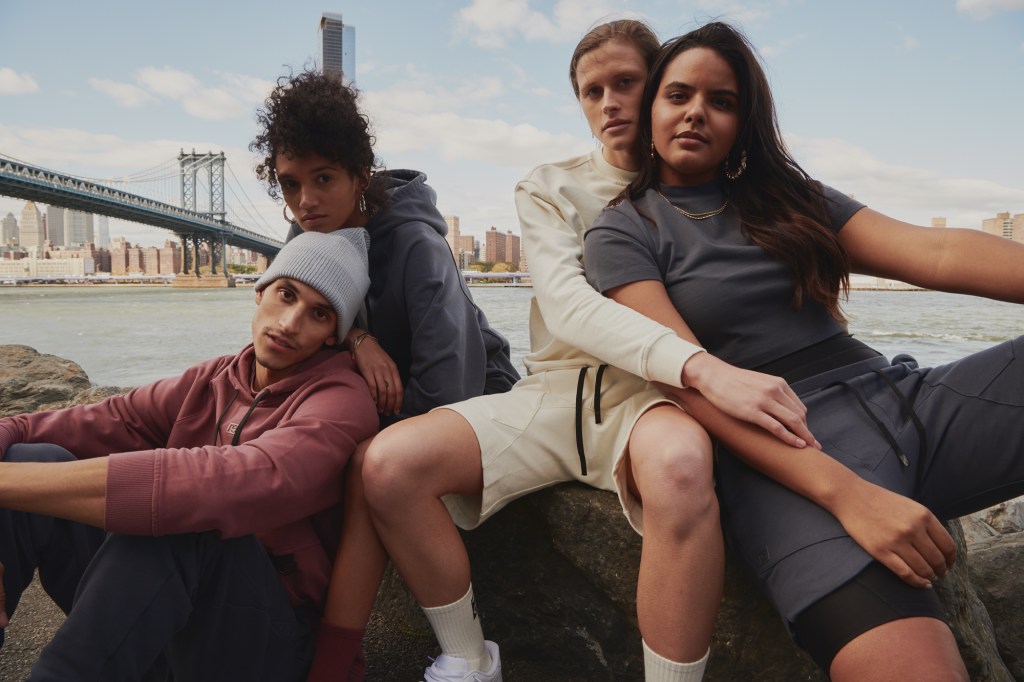 Press, who plays forward for the USWNT and the Utah Royals in the National Women’s Soccer League, understands the responsibility that comes with representing the United States as a female athlete. She said that she and her USWNT teammates symbolize a push for change in “gender discrimination in the workplace and in sport” and that the team culture existed long before she joined.

“In 2015, we had no idea what impact our win would have on our lives and on our country, but in 2019, we knew going into the tournament what kind of impact we could have by winning,” she said. “We knew that our teams had become a symbol for hope in a divided country. And it’s kind of the time of the woman. And we understood the cultural significance of what we were doing and we carried that with us.”

And the experience in 2015 helped inspire Re-inc as well. “When we got back, we came back to a world changed and people had been inspired. And, you know, our brands blew up and people wanted to hear from us in a very new way. And, however, we didn’t feel like our paycheck reflected that. We didn’t feel like the compensation from our employer fairly appreciated all of our value. There was something missing and we just all felt that. And so through a lot of time and getting the right people and organizing, the four of us decided to start Re-inc, which is entirely separate from soccer.”

The U.S. Women’s National Team in March filed a lawsuit against U.S. Soccer for gender discrimination and unequal pay. “This is true even though their performance has been superior to that of the male players — with the female players, in contrast to male players, becoming world champions,” read the complaint filed in Los Angeles. The women’s team won back-to-back championships while the men’s team failed to exit Round of 16 in 2014 and failed to qualify for Round of 16 in 2018. The men’s team also issued a statement in support of the women’s national team in March.

Re-inc launched with apparel, but will expand into other categories. Press did not divulge which ones, but said they will “provide tools for living and events and experiences for our community to really just continue to propel the mission and the brand.

“It’s not by women, for women — it’s for people,” she said. “We just wanted to have that unique perspective of what it means to be a human, what it means to get dressed in the morning and freeing everybody in that experience.”