The Venice designer of her namesake line of wispy, vintage-inspired blouses, tees and slip dresses wants a piece of the bridal market and has also turned to upping her e-commerce game. 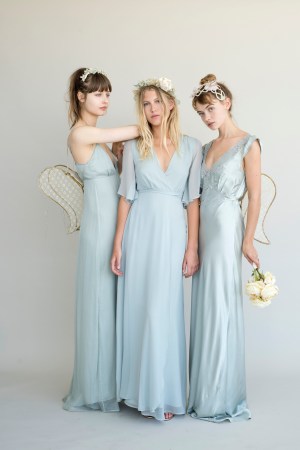 The stark white bungalow with the succulents out front signals one is about to enter a place of respite from what’s becoming a bustling section of Rose Avenue in Venice.

Inside hang clothes made in downtown Los Angeles, for Lily Ashwell’s namesake line of sand-washed, silk, bias-cut skirts; blouses adorned with rows of vintage glass buttons, and Japanese linen overalls. The newest offerings hang near a dressing room: five styles of silk dresses aimed at the new generation of brides looking for something trendy and wearable. Ashwell officially dips into bridal with the Made in L.A. and made-to-order pieces that range from about $350 to $550. Styles include a wrap dress, a bias-cut slipdress and a cap-sleeve gown dressed with hand-cut English lace.

Ashwell, who herself will be in a total of five weddings by summer’s end, said her line is the perfect answer for stylish bridal parties.

“The bridal industry is changing, and people are not wanting to go with that more conservative, typical look,” the designer said.

Ashwell recalls having gone on a hunt for bridesmaids dresses for one’s friend wedding, and after finally finding the right style, the group was disappointed to learn the store didn’t have enough of the dresses in stock.

Ashwell’s offering her dresses for sale through her online shop, or they can be tried on with a side of Champagne in her Venice boutique and then made to order and turned around within six to eight weeks. She’s offering 25 color options and has set a four-dress minimum per order.

Ashwell’s also boosting her e-commerce game with a web-site overhaul that has added nearly all of the inventory that can be found in her store, which includes not only her collection but home products from local designers, in the way of journals with marbleized covers, ceramics and sea-grass-woven baskets.

Her strategy is not as much revolutionary as it is simply smart: She’s focused on the merchandising story online, hoping to avoid being yet another online boutique throwing JPEG files of product on a site with pricing, material and other basic information.

She’s focusing on single pieces in the collections, photographed on models wearing those items in different outfit combinations to show how each can be styled in different ways, in a move she distills down to “useful information and less of a sales pitch” than the typical related-item dialogue box an online shopper commonly encounters.

“That’s how my design process is different from a lot of other designers, because, for me, I’m a little bit of a minimalist actually, and I’m not much of a consumer,” Ashwell said. “So when I design, I really want the pieces to be useful, and I really consider how each piece can be incorporated into someone’s wardrobe.”

Ashwell launched her line about four years ago and originally started as part of her mother’s — Shabby Chic founder, Rachel Ashwell’s — licensing business. About a year after that, the younger Ashwell struck off on her own.

“My mom has created such a famous brand and such an iconic sort of lifestyle, it felt a little restricting to me, because of course I’m influenced by her creatively, but I also have my own point of view,” she said. “Obviously, there’s flavors of her aesthetic here, but there’s also something else that’s me, and so I felt the need to remove myself from the Shabby Chic world.”

She started off with a wholesale business, selling in boutiques such as Steven Alan and Ron Herman Japan, operating off the traditional fashion calendar. Two years ago, she went direct-to-consumer, now producing limited-quantity collections every month. That was followed with last year’s opening of the Venice store, which incorporated the home and other products into the mix.

“It was always the vision, when I had the brick-and-mortar, that I wanted to incorporate home and useful lifestyle items that were an extension of the aesthetic of my clothes,” Ashwell said. “Yes, the clothes are beautiful and detailed, but they’re not precious. They’re meant to be worn and lived in. And they have always felt like a lifestyle to me, to sort of express that through other things as well.”

Ashwell doesn’t see herself opening another door, saying her love for the store stems from her only having to focus on one outpost, but it’s also not where she sees the future of the business.

“What’s more interesting to me than opening more brick-and-mortar is to really bring this magic online and to expand the e-commerce,” she said. “Even if I were to open another brick-and-mortar, that’s just in L.A. and New York. I’m interested in reaching everybody, and that’s what the Internet can do and that’s why it’s so interesting.”