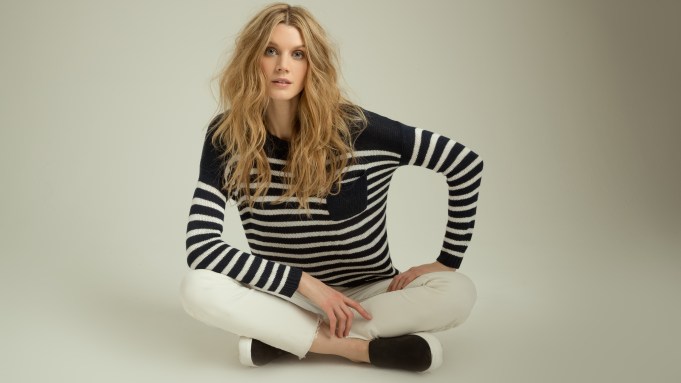 Liz Lange is back with a new business.

She has teamed with business partners Audrey Kirdar and Jane Wagman to launch a contemporary women’s fashion brand, Navy Days. The fast-fashion label bows Wednesday and is available exclusively at navydays.com.

“I’m a serial entrepreneur. I tend to do new things,” said Lange, the former maternity wear designer, in a telephone interview Tuesday.

Navy Days plans to introduce styles in small quantities every three to four weeks without restocking. Instilling a sense of urgency, the items won’t go on sale so the consumer is trained to shop before their favorite items sell out or risks losing access to it. The collection focuses mainly on tops, along with a few dresses and a small selection of bottoms as seasonally appropriate. Navy Days offers sizes ranging from XS to XL and prices run the gamut from $65 to $110.

“I started itching to start my own apparel brand again, because I did start to notice an area similarly to the way I felt about the maternity space back in 1997. I felt there was some open space that needed addressing in 2018,” said Lange. “The concept behind Navy Days is it’s an online-only, fast-turn shopping site that has elevated-looking items for very friendly prices.”

The partners named it Navy Days based on a color they believe every woman should have in her wardrobe, and it sounded cheerful. The line’s not all navy, however. There are also neutrals such as blacks and grays.

Lange said she’s very involved in the collection, approving all the merchandise and design, but it’s not a “Liz Lange” collection. They have a designer doing the day-to-day design.

She said there’s a reason she’s not replenishing stock, and wants the customer to buy it when they see it.

“As a consumer and former retailer myself, I’ve felt the shopping model was kind of broken of late. I have been trained now that when I see something I like, in a store or online, I know that if I just wait, it’s going to go on sale, and sooner rather than later, and not just in purple polka dot, but in black. That’s how the customer has been trained. That doesn’t work for retailers. As an avid shopper who lives in New York City surrounded by stores, I realize all I want to do is shop online, which is scary for stores, I suppose,” she said.

From a merchandising point of view, the business is primarily a site for tops.

“When I travel, I’m known for this. I can go anywhere for any length of time ­— Christmas I was two-and-a-half weeks in Asia ­­— and I will go carry-on only. The rule in my family, my kids have to do the same, is carry-on only. The way I do it is if you have one or two bottoms that fit you well, as long as you have an array of tops with you, it’s like you’re wearing a different outfit every day,” explained Lange.

So on the brand’s web site, she’s offering a wide variety of tops that create different looks, from day to night, conservative to sexy. In the summer and spring, she’ll sprinkle in some dresses and skirts to mix the whole thing up. The clothing is made mostly in the U.S. She declined to give a first-year projection.

Lange launched her own maternity brand in 1997. A decade later after opening multiple Liz Lange flagships and forming major licensing deals with Nike Inc. and Target Corp., she sold the business to Bluestar, which later sold it to Cherokee. She is the face of Liz Lange for Target and a founding partner of Navy Lane Capital, which houses Navy Days. In 2010, Lange’s first women’s ready-to-wear collection launched on HSN, Complete Me by Liz Lange. She is also an investor in brands such as Cool Water and Carbon38.

Kirdar has more than 20 years of experience in the global retail and consumer sectors as a board member, investor and adviser. Most recently, she was a founding partner at Navy Lane Capital where she led their investments in such brands as Carbon38, Core Water and rinse.com. Earlier she was a managing director of Financo, where she headed their apparel wholesale and retail space.

Wagman, who is Lange’s sister, has run her own graphic design studio, with clients such as American Express, Express, FARE, Janklow & Nesbit Associates, Lilly Pulitzer and Liz Lange Maternity. She also cofounded a women’s shopping site, Shopafrolic.com, with her sister.