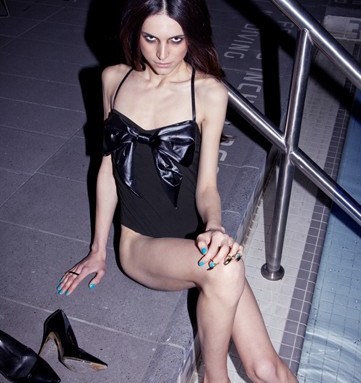 Marc Jacobs is about to get some friendly competition from his significant other. Lorenzo Martone is set to launch his first fashion project, a line of women’s swimsuits under his new Nycked label. The collection of about 20 designs, created in collaboration with jewelry designer Jules Kim, will be in stores in November.

“Swim is part of my Brazilian heritage,” said Martone. “Swimwear is considered real fashion there. When Brazilians go on vacation for four days, they bring at least four different swimsuits.”

Martone and Kim set out to create a sophisticated, fashion-forward swimwear line inspired by the gritty, urban aesthetic of Manhattan as an antidote to the cheery floral and palm prints that tend to dominate swim racks. “We saw an opportunity in the marketplace for something cooler and more downtown,” explained Martone. “Swim seems to be dominated by an L.A. aesthetic, and our collection brings a New York attitude to it.”

Nycked, pronounced “nicked,” is a play on the initials N.Y.C.

The debut collection includes flourishes such as swimsuits adorned with heat-bonded foil sequins, oversize decorative bows in ciré Lycra, bold corset lacing and lingerie-inspired lace peeking out of demi-cut bikini tops. The key color themes are black, white and red, with nude mesh overlays on some designs. The brand’s logo is a geometric bat, based on an origami construction.

Despite the sleek aesthetic of the collection, Martone and Kim stress that all the swimsuits can be worn in the water and the designs are heedful of the practical requirements of the category. “There are only sequins on the front of this bikini bottom, and not the back, so that it’s more comfortable to sit on at the edge of a pool,” Kim said.

The swimsuits will retail for about $120 to $130, with some cover-ups going up to $210. Retailers will get their first look at the line during Miami Swim Week in July, with Martone and Kim planning to show out of a private suite in a hotel. The duo are targeting trendy swim and specialty retailers, as well as some of the major chains. “We’d like to get into a Saks Fifth Avenue or Neiman Marcus,” said Martone.

Nycked is producing the collection with a specialized swimwear factory in New York, which helped transform the fanciful designs into commercially viable pieces.

The label is personally financed by Martone, who holds an M.B.A. from ESG in Paris and is also a strategist at ad agency Chandelier Creative (working on accounts like Seven For all Mankind and Melissa Shoes) and co-founder of the Arc NY talent and p.r. agency, which represents a stable of top models. Kim, a Richmond, Va., native sells her Bijules jewelry line at 35 stores and will launch two lower-priced lines, Le Bij and BJ by Jules Kim, at Urban Outfitters this fall.

One thing Martone did not do on the Nycked project is consult Marc Jacobs for advice. “Relationships are hard enough without mixing business into them,” he said of his beau. “I don’t advise mixing the personal and professional.”