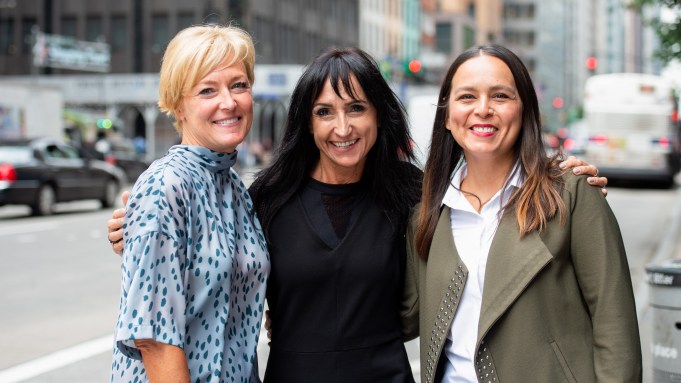 Lyssé New York, which began in 2009 and became a go-to leggings resource, has evolved into an urban-inspired women’s apparel collection.

The fall collection is being shipped to stores and was designed by Claudia Marenco, who joined the company in October as creative director.

Italian-born Marenco previously held designer roles at Elie Tahari, Kenneth Cole, Banana Republic, Rachel Roy, Ports 1961, Saltaire, Trussardi and Max Mara. She’s also worked as a design consultant for Multiplica, a nonprofit where she created and launched an accessory and lifestyle-ethical brand in collaboration with Guatemalan artisans, and Human Habit, where she developed and launched an e-commerce contemporary unisex brand based on wearable artwork.

For fall, Lyssé offered its signature leggings, along with legging-friendly tops, pants, skirts, jackets and wraps. The brand uses such fabrics as knit denim, microfiber, vegan leather and suede, crushed velvet, stretch jersey, and Ponte. Misses’ sizing ranges from XS to XL, while plus sizes go from 1X to 3X.

Inspired by the American Southwest, the fall collection features rodeo-influenced studding, leathers and laser cutting in jackets, jumpsuits, shirt dresses, capes, ponchos and gauchos. Grosgrain ribbons and bold stripes are evident on tops and bottoms, while seaming is important on leggings.

For spring, which will be shown to stores starting later this month, the theme is European escape, with nautical, graphics, urban-inspired looks, and slightly grungier and safari influences. Among the spring looks are a new jogger, a sleeveless dress, sleeveless jackets, and T-shirts that combine jersey with georgette. Lyssé is also offering a red motorcycle jacket that’s completely unlined, and a longer vegan suede shirt with the patented waistband.

“Leathers and suedes used to be thought of as just fall fabrication, but the white leather jacket was our number-one item for spring 2019,” said Jill Kaat, president of Lyssé. “She’s responding to these fabrics all year round.”

According to Kaat, 60 to 65 percent of Lyssé’s distribution is with mom-and-pop boutiques, or around 2,000 specialty stores in the U.S. The remainder is sold to department stores such as Nordstrom, Bloomingdale’s, Lord & Taylor, Macy’s, Dillard’s and Von Maur. The brand is also available on Amazon, Zappos, Stitchfix, Dia & Co., and FabFitFun, as well overseas. It has a web site, lysse.com.

The brand offers 30 to 35 styles a month and has four deliveries a season.

For fall, the executives believe bestsellers will be the leggings, the Delancey top with grosgrain ribbon down the back and the vegan suede jacket.

Kaat believes that wider-leg pants will be an important spring trend. “We’re breaking away from a legging…it’s not so snug to the leg. Alternative leg shapes will be well responded to,” she predicted. She expects to see a nice bump in tunic layering pieces, and the entire sweater category is becoming more important to the collection, she said. Denim remains the number-one bottom category, she noted. The company is offering a denim made of recyclable plastic bottles for holiday.

Lyssé New York was started in 2009 by Beth Gold Cohen, who was diagnosed with breast cancer and was looking for comfortable leggings. She couldn’t find them so she safety pinned a support garment on the inside of a pillow case and cut the pillow case into legs and brought the prototype to a maker that they still do business with who had been based in Long Island City and has moved to China. They developed a two-ply tricot five-inch waistband that was unattached and they received a patent.

According to Kaat, Cohen was looking to create leggings for all women, no matter what their shape and size so they could feel comfortable, confident and supported. The fabric was machine washable and had four-way stretch. Cohen built the company to $7 million and her prognosis didn’t improve, so she and her husband sold the company to a private equity firm, E&A Cos., in 2013.

“Obviously they’re investors so they’re looking to flip it, but they’re in no rush,” said Kaat, who joined the firm almost four years ago. Previously she had her own business and before that spent seven years as president of Tahari suits and dresses.

“My vision for the brand was to really get it out of this pigeonhole of being a leggings manufacturer. I saw the brand as so much more and it could be a lifestyle brand and a lifestyle collection. We have such beautiful fabrics, all four-way stretch, all machine washable. There’s such a great story here in terms of the fabric and the fit,” she said. She said that Marenco “has taken my infant vision and really  exploded it into this sportswear collection.”

Marenco’s design strategy was to combine fashion and athleticwear as she expanded the brand. The collection is manufactured in China, and of course, potential duties could pose a problem. In light of the potential duties, Marenco said their factories are looking to open outside of China, as well.

While the brand had done some items beyond leggings in the past, it hadn’t created outfits or a total look. “This customer loves comfortable products and easy care. She loves muted colors, very urban. She’s not too frilly or too feminine or boho. She’s a woman who’s very comfortable and wants to feel good,” said Marenco.

The Lyssé customer is a woman 35 years and up, although the core customer is over 50. Kaat said the customer likes to be in fashion and on trend, but she isn’t married to a trend, such as ripped jeans.

In department stores, the brand is housed near such resources as NYDJ, Nic & Zoe and Vince Camuto.

According to Kaat, the brand’s business with specialty stores is up 30 percent year-over-year. The company, which generates sales between $25 million and $30 million, hopes to double that business in the next three to five years. Kaat anticipates that will be achieved by an expanding assortment of product, greater international presence,  and expanding the web site and some physical storefronts.

The company has also ramped up its social media. “Social is a big focus for us. Obviously, it’s the gateway and discovery portal for all brands, especially as we continue to focus growth on our direct to consumer web site. It’s our main discovery platform for our customer acquisition,” said Jennifer D’Aponte, head of marketing.