Instead of going the traditional route of teaming up with a major auction house, the designer is selling his archives at bobmackie.com. 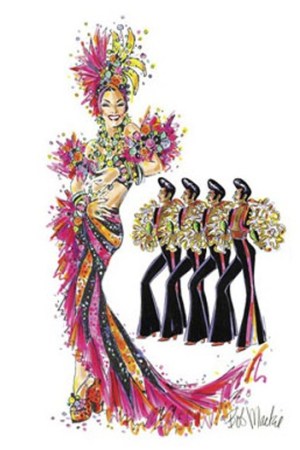 Instead of going the traditional route of teaming up with a major auction house, Bob Mackie Design Ltd. is now selling 46 of the designer’s sketches online.

With thousands of sketches in his archives, Mackie had no qualms about parting with some. Reached in his Los Angeles offices Thursday, the designer said he has held onto most of his sketches for more than 50 years. After seeing how Erté’s sketches were so emblematic of the Sixties, Mackie decided, “I’d better save these. Once in a while I gave them away but basically I have kept most of them.”

Drawings of a Carmen Miranda-inspired tutti-frutti hat and a Carol Burnett Broadway costume are among the keepsakes being sold at bobmackie.com. In addition to selecting the illustrations, Mackie chose the matte and frame for each. All of the sketches are available in two sizes — 14 by 17 inches for $69 or 21 by 25 inches for $179. “It is a certain customer who likes this kind of thing and relates to it in one way or another,” he said.

A limited number of sketches were part of a 2005 Christie’s auction of Mackie’s couture and costumes, which rang up nearly $481,000. This time around, the designer decided to go straight to consumers. “It’s what’s going on these days,” he said. “I’m an old dinosaur, but even with my QVC business, about 25 percent of the business is online. That’s a lot and they do big numbers over there.”

One sketch that won’t be up for grabs is the one he did of the flesh-colored, sequined dress by Hollywood costume designer Jean Louis that Marilyn Monroe wore to sing “Happy Birthday” to President John F. Kennedy in 1963. Early on in his career, Mackie worked for Louis. “One day he rushed in and said, ‘I have to design this dress. Do this and this,’” Mackie said. “I did the sketch and then I never saw it again. A few years ago I was watching the ‘Today’ show and they were talking about Marilyn Monroe. They had some memorabilia and there was the sketch. I think her sister had it.”