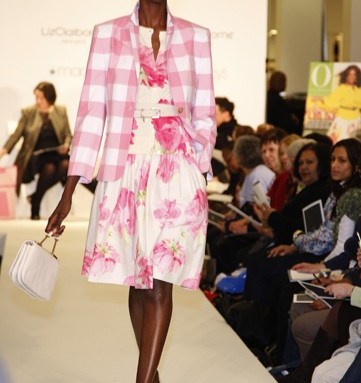 The Liz Claiborne brand hosted the first of a much-anticipated marketing bonanza, unleashing the personality power of Isaac Mizrahi on eager shoppers at Macy’s Herald Square on Thursday night.

About 500 women packed Macy’s third floor not only for a fashion show presenting the colorful and whimsical makeover of the iconic but long-troubled brand, but also to see Mizrahi — along with Macy’s vice president and fashion director Nicole Fischelis and O, the Oprah Magazine’s creative director Adam Glassman — wittily debating fashion.

“Shopping is a form of entertainment,” the charismatic designer said. “It’s supposed to be fun. Never go shopping with your mother.”

The audience ate it up, laughing, applauding favorite runway looks and asking Mizrahi:

• Do you think women should dress according to their body shape or what’s in fashion? Mizrahi: “They should just buy my clothes.”

• Where do you get your inspiration? “Theatre, ballet, food, old movies.”

• Will New Yorkers ever wear color? “They do in spring.”

• I’m turning 40 in two years — should I be concerned about dressing my age? “Tired age dictums are over.”

“This is something we’ve been dreaming about for so long,” Mizrahi told WWD between the fashion show and book signing. “I want them to understand what they are getting for their money. At Target, it was about being the least expensive. This isn’t fast fashion — this is value fashion.”

While the main point of the evening was introducing customers to a more modern Liz Claiborne brand, the subtext was mending the relationship between the brand (the flagship of the $4 billion Liz Claiborne Inc.) and Macy’s Inc. The relationship had been tested over the last few years, first by poor performance of the better-priced label and two years ago by the introduction of the exclusive derivitative Liz & Co. brand at J.C. Penney Co. Inc. Macy’s president and chief executive officer Terry Lundgren had applauded Claiborne’s hiring of Mizrahi in January 2008, but had adopted a wait-and-see approach about how the brand turned out.

Since the relaunch, the brand has exceeded its plan both in Macy’s Herald Square and across the company, according to Gennette, and Macy’s is currently examining its fall plan for the brand, which will likely include putting Liz Claiborne in more doors or even giving it additional space is key existing doors. The $800 million brand’s space at Herald Square is “the same size [as before the relaunch] — it’s just white and bright and cross-merchandised now, which makes a big difference,” said Gennette.

Dave McTague, executive vice president of partnered brands for Liz Claiborne Inc., is hoping Thursday night’s success is a good omen for Mizrahi’s upcoming monthly in-store appearances planned through the rest of the spring. McTague’s team is plotting the second-half of the year, which will add Liz Claiborne Inc. chief creative officer Tim Gunn into the mix.

And as Mizrahi told the adoring crowds, “This is a great night for us.”