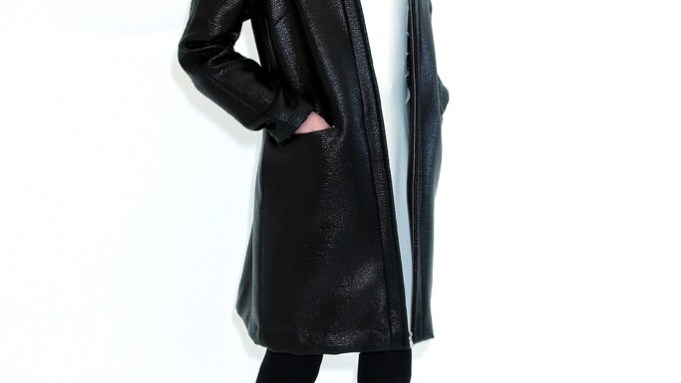 This fall’s debut at retail of the Catherine Catherine Malandrino label is the first major move by the trio since they joined forces. The line will be unveiled this week at WWD Magic in Las Vegas. During a preview of the designer’s most affordable looks to date, their outlook was a united one, with each giving the others ample time to express their thoughts without jumping in. “As you can see, this is a real admiration society,” Levine said.

So much so that Tahari arrived at Malandrino’s West 39th Street studio Thursday with a small, heart-shaped box of chocolates and a red stuffed teddy bear for her. (He quickly gave credit to his girlfriend, Joanne Blessinger, for the idea.) The seeming lovefest kept going during a photo shoot, when Tahari kiddingly helped Malandrino adjust her dress to accent her décolletage, Levine deadpanned, “I have the same problem with my stomach.

Lighthearted as all this seemed, Tahari and Malandrino said they have “honest exchanges” about each other’s designs (sometimes solicited, sometimes not), which are valued and, more important, helpful. Everyone is in agreement about taking their time to rebuild a business that overexpanded and paid the price when the economy faltered in 2008. Tahari said, “In this industry, we have, all of us, an issue with egos. If people would remember to control their egos, then the sky is the limit. This is our issue and we say, ‘No issues, only solutions. If you have an issue, I have a tissue.’ ”

Tahari continued, “My experience has been it’s not about us. It’s about, ‘How can we contribute something to somebody and do it better?’ ”

Malandrino’s business should ring up sales of $40 million to $50 million this year, which would be a significant improvement considering the business was around $23 million before Levine and Tahari stepped in, the former said. Shannon Bouthillette has been named president of sales at Catherine Catherine Malandrino. She previously worked at Betsey Johnson.

“This is really like an in-house project. It’s not like giving a license to a company and having to monitor them and worry about them,” Levine said. “We know whatever we do is going to be first class. And if it isn’t perfect, it’s not going to happen.”

About 25 to 30 people from Malandrino’s 100-person team are working on the diffusion collection. In the company’s leaner days before Levine and Tahari stepped in, there were about 30 staffers or so. With further growth on the horizon, the partners are moving forward with measured steps. “Whatever will be the extension of the brand, we want to make sure we keep it well controlled, because we feel creativity has been at the heart of our success and we want to make sure that is always our first concern,” Malandrino said. “I like to work with a small team that is more like family. Of course the team will get bigger and bigger, but I want to keep the spirit around me as a family spirit with value of love, dedication, friendship and trust.”

When the first shipment of the 150-piece Catherine Catherine Malandrino collection lands in department and specialty stores in August, there will be blouses starting at $79 and faux leather jackets retailing for as much as $400. Geared for stores such as Dillard’s, Macy’s and Bloomingdale’s, the new label is expected to compete with Michael Michael Kors. The aim in the first year is to generate sales of $15 million to $20 million, said Levine, who hopes he and Tahari will see the degree of growth with the collection that they saw when they first teamed in 2001 to launch the Tahari ASL business, which includes the Tahari Arthur S. Levine brand of suits and dresses. Levine was at one time chairman of Kasper ASL and, before that, principal and chief executive officer of Anne Klein and president and ceo of Kasper.

When they first joined forces, Tahari Arthur S. Levine generated annual sales of about $28 million and about $75 million in the second year — a figure that Levine hopes to exceed with Malandrino within the next three to five years.

Recalling those early days, Tahari said, “I had no expectations. I went with my intuition about Arthur — the same I feel about Catherine. It wasn’t about numbers. It was about delivering the truthful and honest product to the customer. That’s what we’re working for.”

Relaying Malandrino’s whimsical style as well as the quality and make of the new collection is essential, but Levine allowed, “Of course, we can’t use cashmere and the yarns that Catherine does [in her main collection], but certainly we can achieve her look and give it to the working woman.”

With Catherine Catherine Malandrino up and running and the designer’s Black Label gaining doors at Neiman Marcus, there is interest in expanding its outerwear and other areas. “Catherine has got a great eye — shoes, handbags, jewelry, underwear — those are categories that are untapped for us,” Tahari said.

Talks are under way for a signature fragrance, which would be launched next year. As for the timing of other new pursuits, Levine said, “Basically, there are so many coals on the fire…things will probably start to pop in another two months.”

Freestanding stores will be added down the road too. As of now, Malandrino has remodeled boutiques in New York’s Meatpacking District, SoHo and East Hampton. Off to Europe this week, Levine will be looking for a new address for a Paris store. China is a major area of interest for freestanding stores, they said. There are also plans to open a boutique in Istanbul, and a second store in Russia, in St. Petersburg. The existing one is in Moscow, not far from Red Square.

“The goal is to build a global brand and this is one step in that process,” Tahari said. “The world consists on many levels, with many products and many categories. Fashion is becoming more of a global business especially for America, not for Europeans — it’s always been global. More and more people are looking for American designers. When we go to stores in Europe, all the American designers have shops that never happened before. For global expansion, we knew that we needed this category that is being launched now.”

The French-born Malandrino has also seen some changes since she relocated to New York. “I’ve been working on the designer level in America for 14 years and it has changed. You have to make sure you are able to give something original, creative and well priced, which is certainly what the world is looking for,” she said. “To achieve this challenge would make me complete in my profession.”