Marled by Reunited Clothing: A New Player in Contemporary Separates 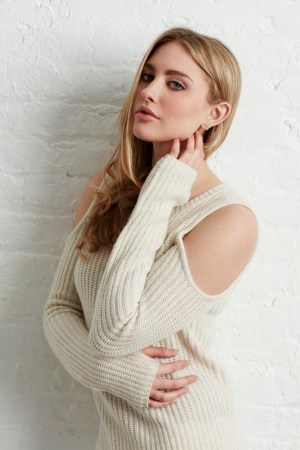 Marled by Reunited Clothing aims to build a branded business in the contemporary separates market.

For the past five years, Reunited Clothing has been making private label knitwear, wovens and cut-and-sewns for 30 different store groups from high-end specialty stores to mass retailers. A private label contemporary collection they successfully created for one account prompted the partners to try their hand at their own contemporary branded line around eight months ago, and Marled by Reunited Clothing was born.

For spring, Marled by Reunited Clothing was sold into Macy’s, Neiman Marcus Direct and some national stores. For fall, the partners are looking to expand into more department stores. The fall line features cashmere cold shoulder and off-the-shoulder knitwear, cardigans, cropped sweaters, novelty knits, blouses with embellishments and classic white shirts wholesaling from $29 to $100.

Batayneh described the overall aesthetic of the brand as trends that come from the runway but are “interpreted to be democratic in fit and in price.”

“Details we focused on this [fall] season were sleeve interest with blousons and flare sleeves on wovens and knits, stitch interest and mixing of novelty stitches in chunky gauges on the sweater knits and feminine tie and ruffle details on both wovens and the knits,” said Batayneh, who got her associate’s degree from The New School’s Parsons School of Design after graduating from the University of Michigan.

Sizes range from small to extra-large.

Sherman discussed the “incredible importance of fast fashion” and their goal to bring that concept to department stores. The company, based at 501 Seventh Avenue, manufactures its collection in the Far East. The company employs 65 employees at Reunited’s New York headquarters and 24 people in the Shanghai office.

“We’ve gotten a great reaction,” Sherman said. “It’s a passion for all four of us. We’re not under the gun to make this a success overnight,” he said, noting they just want to do business, stay in business and build buzz.

Since the partners come from the world of private label, they noted that they put a lot into the garment while keeping their eye on price point. They claim that what would normally retail for $88 to $90, they’re able to put that same quality and taste into a $58 garment. “Our goal is to have it sell when it hits the floor and not sell at the first markdown,” Sherman said.