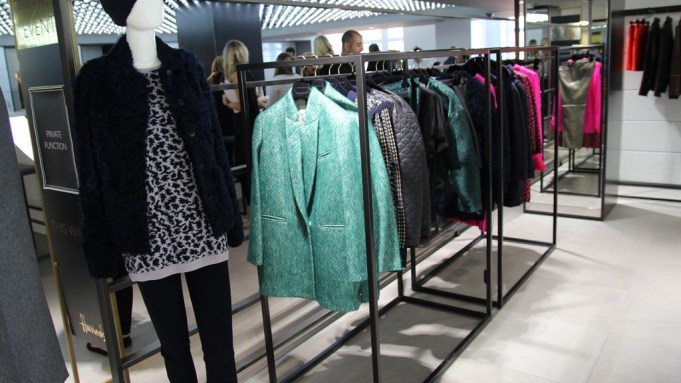 Set over 440 square feet, the brand’s area is placed between Kurt Geiger shoes and Harrods’ latest in-store restaurant, The Salad Kitchen. Juicy Couture holds the opposite space. There are two fitting rooms dedicated to the brand and pillars flanking the space are embedded with screens that show films of the look book shoot featuring blogger Cate Underwood.

From Dec. 15 for two weeks, the company will take over a set of elevator doors on the fourth floor, covering them with branded imagery and situating a group of Mauro Grifoni-clad mannequins on the landing where the elevator doors open.

Grifoni shares the Fashion Lab space with labels including Joseph, Whistles, Zadig & Voltaire and Pinko. Its offering comprises ready-to-wear, shoes and accessories from both its main line and diffusion M.Grifoni collection, with prices starting at about 140 pounds, or around $224, for a pair of jeans to 2,200 pounds, or $3,520, for a shearling coat.

The brand was founded in 1992 by Grifoni with partners Ilaria Sesso and Andrea Breda. It originally made men’s shirts and the women’s collection — designed by Sesso — was added in 1996. “It is my dream to be an international brand,” Sesso told WWD. “We wanted to launch at Harrods because we want to be known all over the world and the store’s customers are very international. It’s also helpful for reaching a Middle Eastern market.”

There are currently four Mauro Grifoni stores in Italy and one in Amsterdam. The brand is in the late stages of talks with a retail partner in China that will see 30 shops-in-shop open in the next few months. Its men’s wear offering is currently wholesaled in the U.K. through Flannels. In 2014, further stores are planned in Moscow, Berlin and Dubai. “But we see London as the most important city to be in,” said Sesso, the driving force behind the brand’s global expansion plans.