Fair attendees said they were staying the course, and hoping for sales to pick up next winter. 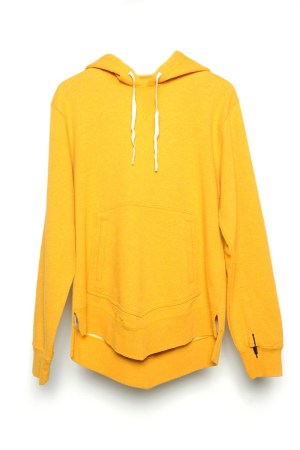 PARIS — Buyers shopping the Paris men’s wear market kept a close watch on their budgets but were moderately optimistic that they will experience a rise in consumer spending by the end of the year. As buyers trudged through the snow-covered French capital, they said they were staying the course, and hoping for sales to pick up next winter.

“Everyone is hopeful that by the end of next year, things will be good,” said Crystal Marquess, buyer for the U.S. men’s Web site Ikkon.com.

Attendance at Capsule was up, and increased more than 20 percent at Tranoï, according to organizers, who said the show benefited from extra visitors who came to the first edition of Tranoï Preview, a women’s event focused on emerging brands.

“For our market in Paris, we want absolutely nothing that is basic,” said Armand Hadida, artistic director of Tranoï and founder of Paris concept store L’Eclaireur. “Instead we want to focus on everything that is very creative, with no price limit.”

Larisa Kolmykova, owner of Moscow-based retailer Air, was looking for hats, and “anything new and different that can’t be found elsewhere.” She said business in Russia is good — “better than in 2009. Things are getting better and better.”

In other areas, however, the economic situation wasn’t as strong. Joey Hadley of London-based high-end store Closet Case said his budget was “much tighter, but we’re still trying to get labels that nobody else has in London.”

Brands exhibiting at Capsule, Tranoï and Mr. Brown, the men’s wear section of the Who’s Next trade show, responded with items that could be worn for more than one season, such as lightweight coats and jackets, and hybrids that could be transformed for different occasions. Technical, modern fabrics with waterproofing, nonwrinkle and durability properties were also key to making a single coat or jacket gain mileage, vendors said.

A cleaner, “dandy,” tailored look was especially strong at Tranoï, where pleated pants were in demand, along with shorter, trimmer pant legs. Capsule kept to a postwar nostalgia coolness, with a more colorful range of fabrics and layering pieces that felt sporty. Mr. Brown also emphasized sporty and rugged, layered looks with a range of denims. Buyers especially appreciated brands at Capsule and Tranoï for taking iconic clothing and tweaking them with new materials and finishes. Scottish and British heritage influences and the mixing of materials were still strong at both shows, while many buyers liked the level of knitwear on display.

Tancrède de Lalun, fashion director at Paris department store Printemps, said he was thrilled by “all these large knits that are complex, giving an archival, heritage feel,” that he found at Capsule. “Printemps is working on increasingly developing contemporary designers. I feel there’s a new type of customer today, who lives in the city, is between the ages of 20 and 45, who was raised on H&M and Zara, and now wants to try out designers. So we’re looking for that next step, as well as top quality and authenticity of style.”

Marco Lau, men’s wear merchandising manager for Galeries Lafayette’s new Beijing branch, said he was looking for items “in a good price range but fashion-forward” for a budget he described as “conservative. China is a huge market but we don’t want to be too aggressive.” Lau was hunting for coats and jackets for Beijing’s cold winters, and appreciated finding a lot of long, hooded coats with fur trim, plus “things that look normal but have a lot of special designer touches and detail,” he said. He was especially smitten by Elka’s new line of solid-color raincoats at Capsule.

Elka showed its first fashion line: a modern offshoot of its 1958 brand. The traditionally industrial product was adapted to become fashionable, with new fittings designed to flatter and fit the body comfortably. Trims and details were also updated and jackets came in bold solid colors.

Colorful prints were eye-catching at all the shows, but classic blacks and grays were strongly represented at Tranoï, where several buyers said they were hoping to tone down the color offering for next year.

Anna Frost, media representative for the London-based store Vertice, said she was looking for new fabrics and “a quiet palette” for next winter, including blacks, grays, whites and touches of green and blue.

“Nothing too flashy. But we’re not afraid of color, so we will have a few special pieces,” she said. The store’s budget was the same, and she was also “looking for something avant-garde — new names.”

On the other hand, online store buyers said colorful items with themes or stories were easier to sell from a computer screen.

“Since we’re online, we need to have a story behind the collection. Either that, or a well-known brand,” said Kai Zollhöfer, buyer for the Berlin-based online store Emeza. He said he was looking for “a cool, urban relaxed look,” and felt “optimistic about the economy in Germany, and especially the luxury market.”

At Tranoï, he liked the young French brand La Comédie Humaine, which uses Balzac-themed, 19th-century animal illustrations for its T-shirts, and a clean, tailored line of pants, shirts and now coats, all with removable and interchangeable collars.

Also at Tranoï, Milano Parigi offered a wide range of prints and subtle embroidered, detailed patterns on suits and short, tailored pants that could be mixed and matched. Touches of red on embroidered designs poked out of more neutral backgrounds. Subtle purples, burgundies and navies caught attention, while bits of orange or red popped out of grays.

At Capsule, Rico presented its first collection of graphic knits in blues, burgundies and greens, with a vintage Eighties edge both in pattern and design. Shipley & Halmos showed a waterproof short coat made of poly fill, designed to stay warmer than a down jacket while holding up better to wear and tear, as part of its collegiate-themed collection.

Sterling 1958 modernized iconic coats with technical fabrics. Printed nylon and cotton with rubber backing were used for waterproofing and crease resistance, while Thinsulate, the synthetic thermal insulation, was used to line lambskin coats.

Cash CA chose Capsule for its international debut following the recent addition of codesigner Kazuki Kuraishi to the British knitwear group. The collection exemplified a whimsical attention to detail, with a modern edge to classic items. Thin penholders just big enough for one pen were hidden in sleeves or collars. Traditional coats were packed with layers of different linings, including welded pockets and removable hoods made of contrasting fabrics.

Mr. Brown was given extra visibility this year thanks to its new placement on the ground floor. The young Belgian brand Black Balloon grabbed attention for its personalized, retro-print line, also available in women’s wear. Designers used old family vacation photos from the Fifties to create kaleidoscope-style patterns that become recognizable when viewed up close. Many of the sweaters and tops included discreet touches of the busy prints, while more daring rocker-style two-piece suits were fully covered in matching patterns.