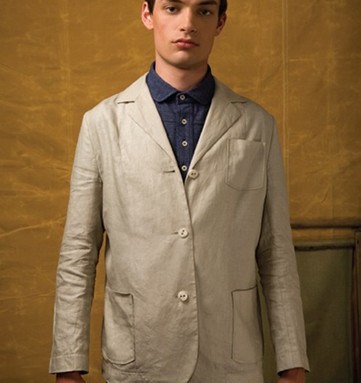 Nautical style doesn’t always mean posh and preppy. Norsea Industries is inspired by the people of the rugged and remote North Sea coastline. Think Trojans, Celts, Saxons, Vikings and 18th-century whalers. That’s no yacht club. Based in Yorkshire, England, creative director Stephen Banks has designed men’s wear for almost 20 years for brands including Paul Smith, Ben Sherman and Tommy Hilfiger. He launched Norsea for fall 2008. Local utility and workwear are a main source of inspiration, along with local craft techniques like silversmithing, fishermen’s knits and scrimshaw. Norsea also is committed to using organic cotton, yarns and dyes whenever possible. Timo WeilaNd Designers Timo Weiland and Alan Eckstein launched a neckwear line called Timo Weiland for pre-fall 2009, and are expanding the brand to a full men’s and women’s collection, including knitwear and accessories. The inspiration for the neckwear is a cross section of historical references, such as Edwardian England and 18th-century France, rendered in surprising fabrics like duchess satin, silk charmeuse and perforated leather, coupled with a bright, bold palette. The debonair apparel collection continues this concept by infusing inspiration from the Baroque through Rococo eras into modern, edgy silhouettes. The period elements also are reflected in custom prints such as floral silk reminiscent of a decaying garden encircling a rural English manor. Timo Weiland is planning a presentation for New York Fashion Week.

This hip and casual men’s brand is designed by Cathal McAteer and Elbe Lealman in London. They and six other employees work in a studio behind their store on Lambs Conduit Street in Bloomsbury. The label was started in 2001 and spawned Shofolk, a footwear collection, three years later. Today the clothes and shoes are sold to around 130 stores worldwide and have a strong presence at Liberty in London. Folk’s mission is to create simple everyday clothes that improve with wash and wear. The designers focus on color and innovative, fun details, and they source from all over the world. Alpaca knits are made in Peru; shirts in Portugal; jackets in Hong Kong; accessories in England, and merino knitwear in Uruguay.

In 2005, Hyden Yoo launched a simple collection of dress shirts. Three years later he expanded into a full collection and held a runway show through Gen Art’s Fresh Faces program. The concept for spring is a Londoner visiting his relatives in the English countryside. The clothing is tailored yet has a casual look and light, soft feel. Colors include neutrals and pops of rust and pale yellow. Yoo is planning his first men’s-only show for September. He also is designing a line called Standard Issue for Urban Outfitters that will hit stores for the holidays.