The long hot summer on the East Coast suited the event just fine. 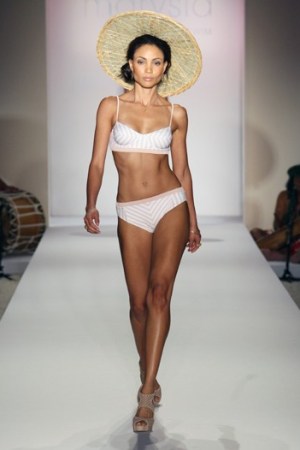 The Swimwear Association of Florida’s trade event, anchored by SwimShow, with 350 brands, 2,000 lines and upward of 2,000 buyers at the Miami Beach Convention Center that ended its four-day run on July 20, included a deluge of satellite shows, performances and parties, and an upbeat spirit about beach business this summer.

Boutique trade show Salon Allure sold out its inaugural event with 21 vendors, such as Red Carter, Tori Praver and Nycked at the W South Beach, which hosted a group fashion show sponsored by Diesel along with independent shows for Melissa Odabash. Showrooms also booked suites at many Miami Beach hotels, where a slew of fashion shows for the likes of Betsey Johnson, Inca and Paula Herbert took place, in addition to Mercedes-Benz Fashion Week Swim’s 26 designers, with highlights such as Mara Hoffman, Beach Bunny and Marysia, at the Raleigh from July 15 to 19. Tack on private dinners, pop-up shops and luxury brand tie-ins, and the area was hopping.

Buyers and vendors said the sector has been warmed by the East Coast’s heat wave, compared to last summer’s rainy, cool weather.

“Mother Nature has been very kind to us this year,” said Anthony Peterson, an account executive at Perry Ellis, which owns brands such as Jantzen. “Since women have so many opportunities to wear swimsuits these days, they tire quickly of those they own and want something new.”

Also grateful for the weather, Marna Hann, owner of Jerrie Shop’s two locations on New York’s Long Island, said sales increased 25 percent compared with last year, which marked the first time in nearly a quarter century she didn’t attend SwimShow. Back with caution, she stuck to established brands like Shan, Tommy Bahama and Karla Colletto, rather than her usual focus of seeking newness.

“I wrote an enormous amount of paper at the show, which I normally don’t do, and listened to my gut instead of an open-to-buy,” said Hann.

But the weather didn’t cooperate for everyone. Diane Biggs, president of Diane’s Beachwear, a Manhattan Beach, Calif.-based specialty chain with 17 stores, said her region suffered a detrimentally wet spring followed by June gloom.

“If the sun had been out, I would have done triple the business,” she said. “We had a great Fourth of July, and our customers need suits for Vegas and Mexico.”

The oil spill affected Gulf Coast retailers, who blame the media more than the actual BP disaster for scaring away tourists. Heather Hood, an owner of HL Hood and H2O boutiques for clothing and swimwear, respectively, in Orange Beach, Ala., said sales slowed long before the oil washed ashore due to hype.

Already struggling from hurricanes, the recession and foreclosures on the area’s boom in second homes, her stores had just begun to rebound.

“We’re not covered in tar like the press claims,” Hood said. “They clean the beaches every day, even if it isn’t necessary, and the water’s clear for a week to 10 days at a time, so people are swimming. But many have canceled vacations. We had planned to increase our open-to-buy before the spill.”

Janice Camel, co-owner of Get Wet Shop in Lafayette, La., reported her clientele’s mass exodus to the Florida Panhandle has been diverted inland to lakes and rivers, but she’ll order 10 percent less merchandise because business is off. Writing Kenneth Cole, Sunsets and Leilani, Camel was most excited about 2 Chillies, an Australian collection with teenybopper pinstripes. She said the trendy gray merchandise didn’t mesh with her area’s preference for color.

“I’m disappointed there wasn’t as much neon,” she said.

Buyers not near the Gulf Coast said customers were vacationing and spending again after a depressing couple of years. California Sunshine, a specialty chain with 14 stores in New York and New Jersey, brought all five of its buyers and a 20 percent increased open-to-buy, according to the team’s Lillian Chappan.

“I’m working a full day on Tuesday,” she said, of the shows’ last day, when traffic normally tapers off.
Deborah King, owner of Laguna Beachwear boutique, has experienced a similar comeback, though her buying budget has dipped 15 percent from prerecession, when women bought three suits at once. She ordered Agua Bendita, Caffe and Frederick’s of Hollywood, and searched for less expensive cover-ups.

New contemporary cover-up collection 6 Shore Road, retailing for $150 and under, is meant to answer that call, according to owner Pooja Kharbanda. Bestsellers were a sac minidress in neutral linens with a rope belt and a roomier version in nude or gray cotton Modal. Both retail around $100.

“I love gorgeous silk caftans, but they’re expensive and not wearable at the beach,” she said.

Retailers also loaded up on hats for sun-conscious Baby Boomers, but mainly relied on cover-ups to bolster sales. Planning lots of cover-ups, Chappen said her customers count on them for newness more than suits. She cited factors like not needing a perfect body to enjoy the category and being able to hide last year’s suit underneath. Lisa Arthur, owner of L.A. Sun & Sport boutique in Oklahoma City, said the item has been a huge help in recovering from the recession.

Rhonda Todaro, swimwear and resortwear designer and buyer for Sundance Catalog, said her misses’ customer has become more contemporary. They want young but appropriate looks from a range of designers like Aerin Rose, OndadeMar and Seafolly, an Australian company, she said.

“We sell a lot of one-pieces, but they can’t be dowdy,” she said.

Fit translates to lingerie structuring like sculpted cups, so the basic triangle top without support or padding wasn’t as favored. Jantzen presented a corset group, a modern take on its iconic shirring, as well as convertible styles, such as high-waisted bottoms that fold over or scrunch down, or bandeaus with multiple halters.

From the energy to fresh, feminine designs, Melisa Belinger, director of merchandising and marketing for Everything but Water, an Orlando-based specialty chain with 61 stores, summarized the week when she said: “The industry shouldn’t be pulling out or holding off at all. The customer is back, and it’s a very healthy category.”