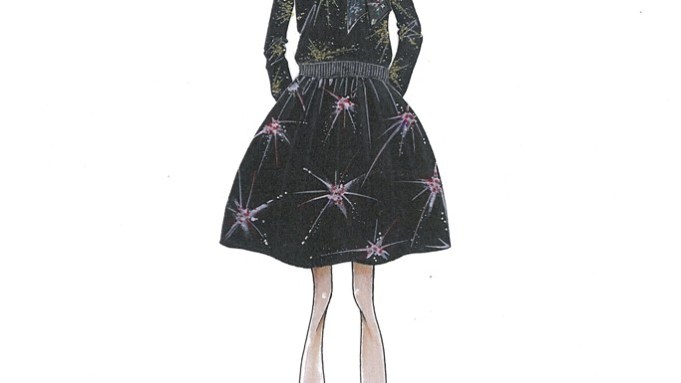 Massimo Giorgetti calls himself a “fashionista from the age of 16.”

He founded MSGM in 2009 with a men’s collection, and followed with women’s wear in 2010 — women’s now accounts for 80 percent of the company’s business.

“When I first presented my men’s line, I also designed a women’s rugby-inspired bouclé jacket lined with vintage polo shirts and trimmed with fluorescent fabrics,” Giorgetti said. “It had such success among the international buyers that I decided to start the women’s line.”

“Our mission is to deliver strong collections at competitive costs,” Giorgetti explained. “That’s why many department stores are still trying to understand where it’s better to display our pieces. They think that in terms of style, they should stay next to designer brands, even if, considering prices, they are in line with contemporary labels.”

The lines are currently sold at about 300 doors worldwide, including Harvey Nichols in London, Spiga2 in Milan, 10 Corso Como in Seoul and Nordstrom in the U.S.

“The fall collection is focused on the theme of explosions,” Giorgetti said.

Shirts, skirts and dresses featuring clean silhouettes are printed with images of different kind of fireworks, along with “exploded” glitter, polka dots and houndstooth patterns.

The lineup also includes more structured cocktail dresses with couturelike details, such as a wool style printed with chalk for a tweed-inspired effect, and a range of outerwear pieces consisting of tweed, bouclé and laminated oversize or fitted coats and capes.

In addition, Giorgetti designed a capsule jersey collection for night, which includes a black and white floor-length dress and a one-shoulder jumpsuit.

The color palette is dominated by shades of pink — from baby pink and powder pink to fuchsia — and also features black with touches of gold, red, electric blue and green.

The MSGM collection will be shown by appointment at the Riccardo Grassi showroom, 4 Via Piranesi, starting Feb. 24.

After a seven-year hiatus, Dirk Bikkembergs is returning to the women’s arena.

For the relaunch of this division, the company tapped designer Paola Toscano, who, under Bikkembergs’ creative direction, will show her first collection for the brand during a presentation on Feb. 23 at the label’s Milan flagship.

“I feel very close to Dirk in terms of creativity and we share the same, almost obsessive veneration for the human body,” said Toscano, who launched her own line, called Yu London, in the Nineties. That was shuttered in 1999. Over the years, she worked with brands including Anna Molinari, Prada and Strenesse Blue. Toscano was also creative director at British label Matthew Williamson, and was design director at Emilio Pucci from 2006 to 2009 and Piazza Sempione in 2009.

In line with Bikkembergs’ signature luxury sporty attitude, Toscano designed a sophisticated yet functional lineup, consisting of more casual and relaxed pieces juxtaposed with formal outfits for the office and sensual eveningwear.

“We wanted to create a bold, feminine and sexy collection for a strong, dynamic woman, who has to face the challenges of everyday life,” explained the designer, who opted for clean, linear shapes with a focus on shoulders and waist.

The fitted silhouettes of comfortable jersey pants and sweaters are balanced by voluminous outerwear, which includes structured stretch wool and cashmere coats.

A big focus is on silk used for both day and eveningwear in combination with leather, as shown on a look featuring a crepe de chine shirt embellished with a nappa plastron paired with a matching skirt.

Toscano completed the offer with accessories including handbags, jewelry and a capsule shoe collection, from sheepskin sneakers and loafers to sandals and pumps.

Last year, when Chinese designer Riko Manchit Au founded her fashion line in Guangzhou, she opted for an Italian word as its moniker: Ricostru, from “ricostruzione,” or “reconstruction.”

The goal, said Manchit Au, who graduated in fashion design at Milan-based Istituto Marangoni in 2009, was “to communicate to our customers the journey of reexploring ourselves, rebuilding confidence, re-obtaining beauty.”

Centered on the concept of “basic luxury,” Ricostru collections show minimal shapes, sophisticated details and high-quality fabrics for an elegant yet comfortable look.

For fall, Manchit Au introduced some traditional Chinese elements into a lineup dominated by geometric lines and elongated silhouettes. A leather Chinese collar embellishes a V-neck silver and black floor-length dress, while Asian motifs appear on the belt of a long silk skirt.

The designer also focused on textures, like a stone-inspired black wool coat that’s paired with crystallike wide-leg pants. The collection, which will be sold exclusively at Thecorner.com starting Feb. 23, features prices ranging from 180 euros, ($238) to 1,000 euros ($1,322).

Ricostru will show at “The Vogue Talents Corner” exhibition, organized by Vogue Italia and Thecorner.com, at Palazzo Morando, Feb. 23 to 27.

“There are many celebrities, such as Natalie Portman, who are particularly sensitive to ethical issues and are interested in environmental sustainability,” said Zoraide founder Paola Bay. “That’s why I’ve decided to create a line of green shoes perfect for the red carpet.”

The collection includes three styles, which Bay named after three international movie icons: Marilyn Monroe, Audrey Hepburn and Greta Garbo. They all feature a glossy pink sole made of Thunit, a synthetic material that looks like leather.

The Marilyn shoe is made of eco-lizard, while the vegan T-strap Greta model features a heel made with an Italian beech wood from a renewable plantation, and combines silk and carbon-neutral Alcantara. Audrey, a vegan fuchsia silk sandal, is embellished with a felt flower hand crafted by female artisans in Nepal, who are supported by Global Good Partners.

To fight poverty and promote social justice simultaneously, this U.S.-based non-profit organization helps women, who create fabric and handmade pieces in depressed areas across Asia, Africa, the Americas and the Middle East, to start and run their own business.

“Many brands recently supported this kind of initiative, but just for one season,” said Bay. “My goal is to develop this line season after season, creating something with a real social impact.”

For each pair sold, the company will plant a tree in a woodland project.