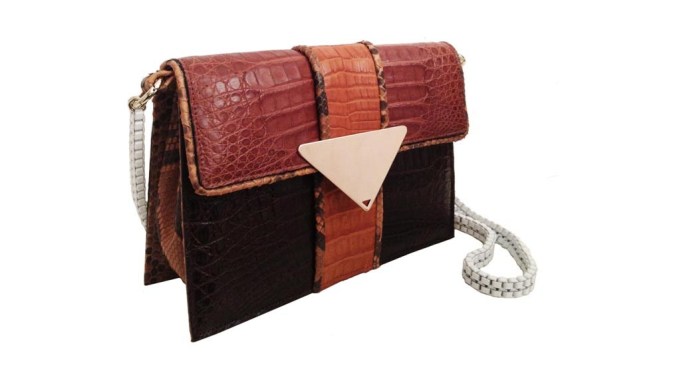 A look at some emerging talents in Milan.

She’s only 28 years old, but Sara Battaglia is definitely no newbie in the fashion industry.

The younger sister of stylist Giovanna Battaglia, she worked for five years with edgy bag designer Corto Moltedo before launching her namesake label in fall 2011.

“I was not brave enough to start my own line, but my sister pushed me a lot — so I designed the first pieces, which focused on fringe,” said the brunette designer, who revealed that her bag collections are inspired by the hyper-feminine women of the Fifties and Sixties.

To highlight the brand’s glamorous yet ironic DNA, each season Battaglia poses for her look book images dressed as women ranging from Marilyn Monroe to Mia Wallace of “Pulp Fiction” and Queen Theodelinda, or top models like Cindy Crawford or Linda Evangelista.

While fringe still decorates some of the most popular styles — such as the “Jasmine,” a small satchel with tassels, and the “Teresa,” a shoulder bag with a fringed strap — Battaglia is also developing the line, adding geometric elements, including a signature triangle metallic closure, and a wide range of evening clutches.

“Lady Me” is a boxy style featuring a closure in the shape of a graphic ribbon, and “Veruschka” is a metal and leather clutch that can become completely flat.

Battaglia’s bags already sell at such stores as Colette and Le Bon Marché in Paris, United Arrow in Tokyo, Kirna Zabête in New York and Joseph in London. For fall she introduced precious skins like crocodile, which appears on a classic shoulder bag showing a new metallic chain. Retail prices start at about 500 euros, or $670, for a small leather bag with a fringe-decorated strap, to 2,000 euros, or $2,680, for a crocodile style.

Sara Battaglia’s new collection will be available by appointment Feb. 20 to 25, 10 a.m. to 6 p.m., at L.A. Distribuzione showroom, 6 Via Ruggero di Lauria.

According to Roman designer Stella Jean, fashion is a powerful form of cultural and social dialogue.

“Designing my collection has been a sort of therapy to try to collocate myself in society. I spent all my teenage years looking for my identity,” said Jean, the daughter of a Haitian woman and a native Turin jewelry maker.

A former runway model — she was discovered by designer Egon Von Furstenberg — Jean was among the winners of Italy’s “Who Is on Next?” competition in July 2011. For this talent search, she created a namesake collection combining African wax cloths, a tribute to her mother’s origins, with men’s striped shirting fabrics, reminiscent of her father’s style.

“I’m sure that different cultures can coexist not only on an aesthetic level but also on a social one,” said the designer, who in her colorful, artisanal collections blends different cultural references with a playful touch.

The fall collection, for example, includes a look featuring men’s sartorial pants paired with a Vichy shirt and a cashmere striped sweater, and embellished with an obi-inspired belt made with African wax.

Latin American references are also evident in the ample capes and in the jewelry showing Aztec graphics, along with the bowler hats worn with foulards underneath — a tribute to the women living in the Andes.

The collection, which retails at around 400 euros, or $535, will be presented with an installation and video on Feb. 23 at Galleria Marco Rossi.

Maria Rosa De Sica is one of the youngest designers to make her debut at Milan Fashion Week.

Creativity and the arts are in the blood of the 25-year-old, who is the granddaughter of Italian neorealist film director Vittorio De Sica.

“My father [filmmaker and actor Christian De Sica] definitely transmitted to me his taste for elegance — he never wears more than two colors — while from my mother [movie producer Silvia Verdone] I inherited the creative attitude,” said De Sica, who, after studying theatrical costume and scenography, decided to opt for fashion, taking styling and design classes.

“It was the most important experience of my life, also because the company is guided by a great family that shows a huge respect for tradition and works hard to develop the brand’s heritage,” said De Sica, who admitted that she learned to use the sewing machine from her nanny.

Facing, like many fashion graduate students, the difficulties of finding a job, she decided with her boyfriend, Federico Pellegrini, who manages the brand’s commercial side, to go solo, launching her label, Mariù De Sica.

After introducing a small summer capsule collection, De Sica is ready to unveil her first complete lineup for fall. The collection will be presented Feb. 20 at the company’s showroom, 25 Via Manzoni, and at the new trade show Super, Feb. 23 to 25.

“For my debut, I wanted to create a collection focused on dresses showcasing women’s femininity,” said De Sica, who added that the offering includes three outerwear pieces, among them a coat closed with leather belts and a cape featuring shoulders covered with leather.

Designed to function all day, the dresses come in a color palette inspired by nature, including red, green, blueberry and black tones. They combine a sensual and sophisticated Forties aesthetic with a practical, contemporary appeal.

The range includes a cashmere wrap dress with a soft high-tech nylon and cashmere lining, and a shift style with leather intarsias. The styles are decorated with polished metallic zips and closures.

Aiming to sell the collection, which retails from 250 euros ($335) for more basic dresses to 1,000 euros ($1,340) for evening gowns, to domestic and international retailers, De Sica and Pellegrini will soon begin e-commerce on the brand’s Web site.

Appearing for the first time on the Italian Fashion Chamber’s official fashion week schedule, Andrea Incontri will unveil his fall collection on Feb. 20 at 7 p.m. in the neoclassical Palazzo Bovara.

An architecture graduate from the prestigious Politecnico di Milano, Incontri, who launched his namesake brand in 2009, won the men’s edition of the “Who Is on Next?” talent search in 2010 in the accessories category. The designer quickly extended his label to men’s wear, delivering sophisticated collections with his signature practical approach and a strong attention to details and use of high-end materials.

Last year Incontri decided to complement the men’s range with a women’s collection.

For fall he revisited some classic, elegant women’s staples, paying a tribute to Italy’s tradition of fine craftsmanship.

Trousers are in two styles: high-waist carrot pants and a more fluid, flared style with a slightly oversize fit.

The palette combines soft colors and saturated tones, including ivory, light blue, purple-red, charcoal and pitch black. The line retails from 300 euros (about $400) for shirts to 950 euros ($1,274) for coats.

Showing his skills in accessories designing, Incontri completes the offering with a selection of bags and shoes.

“I wanted to elevate basic styles focusing on their real use in women’s everyday life,” said the designer. Footwear includes elegant stilettos and boots in polished calfskin and buffalo for day, and silk jacquard styles for evening. Bags feature functional yet elegant pieces with constructed shapes, iPad cases embellished with stones, and flat evening bags with handles.

The daughter of Italian photographer Fabrizio Ferri and interior decorator Barbara Frua De Angeli, 29-year-old Marta Ferri worked in the photography industry in New York and then worked at Prada as visual merchandiser in Milan before making her debut in the fashion design arena in December 2010. That was when she presented her first capsule of one-of-a-kind dresses. In July 2011, she was among the finalists in the “Who Is on Next?” competition, in which the jury gave her a special mention for her ability to revisit custom design in a contemporary way.

For her romantic and feminine collections — currently sold in a number of high-end Italian stores, such as Banner in Milan and Penelope in Brescia, and online on Thecorner.com — Ferri reworks unconventional home fabrics, such as brocade or velvet, cutting them into fluid, loosely constructed silhouettes for an effortless elegance.

In keeping with the brand’s image, the new fall range is focused on sophisticated, easy-to-wear items such as high-waist flared pants — which this season come in a lightweight wool embellished with velvet polka dots — and full velvet brocade skirts paired with fluid silk blouses and girly bustier tops. The collection features a natural soft color palette of sage green, powder pink and cream balanced by dark tones of black, blue and brown. It also includes silk embossed maxidresses matched with collarless tuxedo jackets and a hybrid style — a zipped jacket with a cape.

NEXT: Pinko for Ethiopia >>

Pinko is gearing up to relaunch its signature Pinko Bag, the cotton shopper that became popular among Milanese teenagers in the Nineties.

On Feb. 21 at the Studio Giangaleazzo Visconti, the Italian company will unveil “Pinko Bag for Ethiopia,” a collection of six bags developed under the creative direction of Marina Spadafora.

Manufactured in an eco-friendly factory in Addis Ababa, Ethiopia, using only African cotton fabrics, the bags show patterns inspired by the colorful symbols that the members of six different populations living in the Omo National Park paint on their bodies.

“With the Pinko Bag for Ethiopia, we aim to relaunch our [signature] bag, and we want to start producing objects that, being handmade by artisans, trigger emotions,” said Pinko president Pietro Negra. “I think that globalization can become a positive factor if it will bring wealth to cultures and populations in depressed areas.”

The Pinko for Ethiopia project is a collaboration with United Nations-backed Fashion 4 Development. The initiative, featuring Franca Sozzani as its goodwill ambassador, aims to promote economic and social development in poor areas through fashion.