Three fresh faces at the fairs. 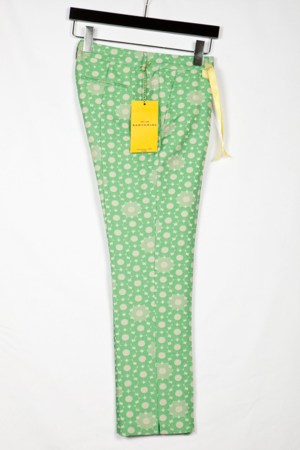 After a successful career as a style consultant for several brands, including Moncler and Roy Rogers, Michele Rossi decided to go solo, launching his namesake company in 2008.

“I wanted to manage a company from A to Z,” said Rossi, who made his market debut with his Femme by Michele Rossi brand. “The first collection consisted of 15 military-inspired pieces, which were an immediate success.”

After the initial group, Femme by Michele Rossi took a more feminine and sophisticated direction and the founder decided to transfer his signature military theme into a new label, called History Repeat.

The company, which in 2011 posted revenues of 2 million euros, or $2.5 million at current exchange, will soon complete its offering with a third brand, Tres Chic s.a.r.t.o.r.i.a.l, to be presented at White’s September edition.

Lodi-based company that is the official supplier of the Vatican. The brocades, in floral or micro patterns, are used for a wide range of styles, from slightly flared to capri and cigarette pants, with belts and welted pockets in gabardine, and with a macramé lace internal belt. The collection also includes trousers in a special cotton fabric treated with salt.

Said Rossi: “Our company is based on the concept of creating beautiful products that are accessible to a wide audience.”

With knitwear in her DNA — her parents used to produce exclusively for Salvatore Ferragamo — Claudia Camarlinghi launched her women’s apparel line, Pink Memories, in 2004. In 2007, she teamed with her husband for a joint venture, called Rosse, the company that produces and distributes Pink Memories. Now, for the first time, it will show its wares at Pitti’s NeoZone trade show in September.

The brand, which is sold at high-end Italian boutiques, including Bernardelli in Mantova, Gerard Loft in Florence and Gaudenzi in Riccione, is infused with a romantic yet contemporary allure and offers feminine and wearable ready-to-wear that combines high-quality fabrics with comfortable shapes.

For spring, Pink Memories focused on sophisticated luxe fabrics, offering a fresh, playful palette raging from bold tones of hot pink and coral to pastel hues like salmon and sage.

Knee-length silk crepon skirts are paired with tank tops with lace intarsia or with soft Lurex T-shirts, and silk dresses are embellished with French lace details. The lineup also includes beachwear in the form of lace bathing suits in 16 colors.

Kleiden, a Japanese brand established in 2010 by Tomoko Shingaki, a graduate of the London College of Fashion, and Yoshinori Fujiwara, a former sales assistant-turned-designer, pays homage to high-end Japanese fashion’s tradition and craftsmanship.

Using sophisticated, durable fabrics, the duo’s collections for men and women focus on specific themes each season. For instance, studies in perspective inspired the spring 2011 lineup, while a series of murals served as points of reference for the current fall collection.

“We think people shouldn’t all have to dress the same way, but should feel free to be eclectic and to express themselves,” the designers said. “Each of our garments has a unique design and is produced in a limited edition.”

Making its debut at the Mi Milano Prêt-à-Porter show in September, Kleiden will present a rtw collection called “A walk in the park.”