Milan Trade Shows: Ones To Watch

A few names to keep an eye on at the next round of Italian trade shows. 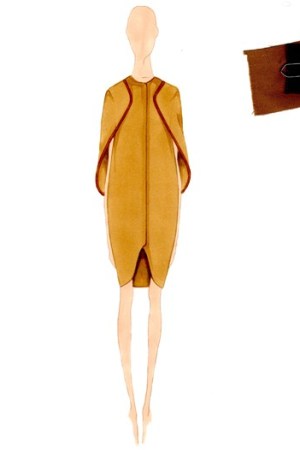 Marco Grisolia went against the mainstream when he decided to go solo.

After studying painting at Accademia di Belle Arti in Brera, instead of staying in Milan, where he was cutting his teeth at men’s wear brand Pal Zileri, he moved to Rome.

In the Eternal city, Grisolia worked for L’Atelier Paró, which specialized in made-to-measure confections, and in 2010, launched Covherlab with Paola Romaniello, his business partner. The collection became an opportunity to put his art studies into practice, but on clothes rather than canvas.

“My style is strongly influenced by the primitivism with a focus on the study of geometry,” said Grisolia. “I want to create a sort of rational new simplicity, where the decorative aspect also becomes functional and balanced with the construction.”

The cocoon shapes of coats and minidresses contrast with the geometric lines of miniskirts, skinny pants and elongated jackets with capelets. For a touch of gloss, the designer covered jackets and dresses with a layer of opalescent organza.

The color palette is inspired by the underwater world with light and coral pinks, gray, black and blue.

Available at the Change of Season boutique in New York, the collection wholesales from 100 euros, or $140, for tops and miniskirts, to 400 euros, or $561, for jackets and cotton double-faced sleeveless coats.

After graduating from Milan’s European Institute of Design, Raffaella Panaro struck out on her own with a T-shirt line called Acid Lab.

“My aim is to rediscover the roots of the Italian craftsmanship that built our country’s reputation in the world,” said the designer, who personally hand-cobbles her silk T-shirts. “Because of the techniques I use, all the pieces look different — it’s like developing many limited editions.”

The first step is to select and mix the pigments to obtain the various shades she uses to hand-dye each piece. Panaro then rinses and irons each T-shirt.

Each piece is embellished with handcrafted detachable decorations applied to the shoulders, featuring feathers and chains and finished with silver details and lined with leather.

For next summer, the soft color palette includes powder pink, beige and various shades of gray.

Available at Facchini in Forte Dei Marmi and De Liberti in Naples, the collection wholesales from 29 euros, or $41, for a printed T-shirt to 149 euros, or $210, for more richly embellished styles.

Like many women, Ornella Spezzati has a fixation for shoes.

Unlike most, however, she turned her passion into a business, launching Shelight with her husband, Pier Paolo Carrino, in 2008.

“[When we launched the line] I had no background in the fashion industry but I wanted to use my creativity to turn my passion for shoes into my job,” said Spezzati, who was formerly employed in the metal industry.

The summer 2012 collection includes silk, satin and suede ballerinas embellished with “Romance,” an antique brooch-inspired accessory, or “Spider,” a woven chain dotted with crystals that fans out from the big toe to the ankle.

The color palette ranges from nude tones to bold hues, such as turquoise and orange.

With prices ranging from 200 euros ($282) for the flats to 600 euros ($805) for high-end sandals, the collection will be available at Megafashion in Milan, at Scarpe in Dubai and at Geneva-based Maison de Création, among the others.

Shelight will make its first appearance at the Micam trade show, Sept. 18 to 21.