Sienna and Savannah Miller, who were the brand’s co-creative directors since the label’s introduction in 2007, have decided to pursue other ventures. 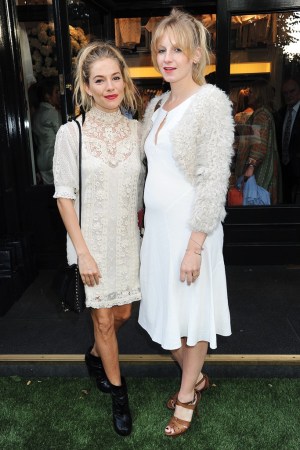 Sienna and Savannah Miller are ending their partnership with Twenty8Twelve after a six-year run. The line will continue under the current design team.

The sisters were the brand’s co-creative directors since the label’s introduction in 2007. They have decided to pursue other ventures.

“We’ve had a brilliant six years at Twenty8Twelve and are now looking forward to new pastures. We wish the brand the best of luck for the future,” said the Millers. The sisters were unavailable for further comment. The label takes its name from actress Sienna Miller’s birthday.

Nish Soneji, managing director of Twenty8Twelve, said: “We’ve had a great partnership with the Miller sisters. From the beginning, our mission was to create a contemporary label with its own identity and strong directional design, as well as an emphasis on quality, cut and finishing. That vision, along with the uniquely British style the collection has become known for, will continue under the direction of the Twenty8Twelve design team.” He said the company, which is a division of the Pepe Group, based in London, will continue to explore retail store investments and e-commerce as part of its rebranding efforts.

Starting with the fall line, the label will read, “Twenty8Twelve London,” rather than “Twenty8Twelve by s. miller,” said Soneji. He noted that the Miller sisters’ input “came much more from the product perspective.” At present there are three freestanding Twenty8Twelve stores in London, located in Notting Hill, Westfield Centre and Covent Garden. “I’ve been struggling the last five years to find a location in New York,” said Soneji.

According to Soneji, the brand is sold in 20 countries. In the U.S., it is sold at stores such as Nordstrom and Intermix, and available on Shopbop.com and Zapposcouture.com. Soneji said there are plans to add e-commerce and a new Web site this fall. The brand will show as part of London Fashion Week on Feb. 18 and will collaborate with an artist.