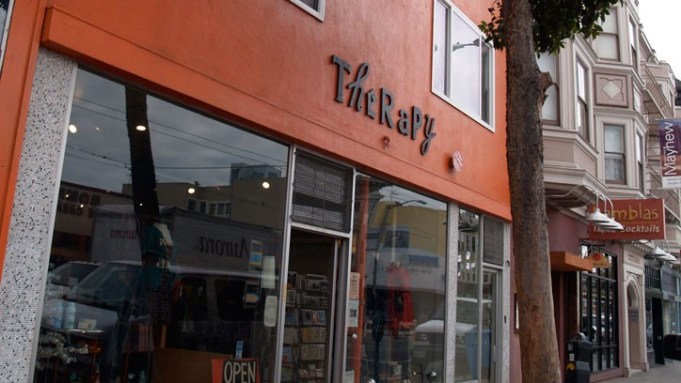 A survival guide on keeping indie fashion afloat in a sour economy could be written by designers based in San Francisco’s bohemian Mission District, where their wares are made locally and sold in namesake boutiques or cooperatives.

“This is ground zero for diversity and creativity,” says Julienne Weston, who since 1980 has designed and manufactured her Weston Wear wrap dresses ($135) and other knitwear in the Mission, which are sold at 600 wholesale accounts. “When I first came here, the neighborhood was real rough, but I knew it had something going on.”

Weston’s only retail outlet is a 2,800-square-foot space on Valencia Street, where sales now are being bolstered with thousands of samples priced from $5 to $35 that otherwise would be warehoused for an annual sale. The boutique is also where the designer goes to critique her entire collections with younger staff. “Lately, we’re focusing on every garment, every style, asking, ‘Why are people buying one thing and not the other?’” Weston explains.

Up the block at Dema, sportswear designer Dema Grim is having success recasting popular silhouettes from earlier seasons using new fabrics and playing with proportions, like turning her cap-sleeve belted Marnie dress, from $152 to $180, into a relaxed shift or changing its character using cotton gray floral, wool tweed or a cotton and silk blend.

“I’ve also been eavesdropping on what people are looking for,” says Grim, in business 12 years, who cuts fabric in the back of her 600-squarefoot store. Her clothes also are sewn by contractors in the Mission. To keep her Sixties Mod–inspired shop a destination for accessories, her sales staff scours Mission thrift stores.

Priya Saraswati, designer of the tailored sportswear label Saffron Rare Threads, credits a special sale she held for her best retail customers for helping to weather the recession’s initial shock to wholesale and online sales. Sharing retail space with two designers, under the name Studio 3579, also has helped with expenses—and maintaining a high-profile location across from hipster hangout Dolores Park at Dolores and 18th Streets.

But crucial to her survival, Saraswati says, is being a San Francisco–made label, which gives her flexibility in changing orders and filling them in six weeks. Additionally, “I find that people who value a high-quality product made locally still shop here,” offers Saraswati, who’s also reintroducing earlier bestsellers, such as a deep-pocket light wool trenchcoat in red, plum and charcoal, $275.

While a strong buy-local culture is part of the Northern California ethos, the mantra is particularly ingrained in the Mission—the city’s former garment-manufacturing center—as are the area’s working-class and artistic roots, which are always at odds with gentrification and development.

With few exceptions, there are no chain stores in the Mission, the city’s largest, sunniest and flattest neighborhood of early 19th-century wooden buildings and warehouses spread across roughly 2 square miles.

“It’s nice that we can keep small businesses here. If you want to go to the Gap or another big business, you can hop on BART and be downtown in a minute,” says Zoe Magee, who’s behind the tailored-to-fit Mission swimwear line and shop Zoe Bikini on 18th Street, with a following of large-breasted women.

“A lot of people who come to me are really psyched to buy something directly from a designer. Even in this economy, I do well because there’s been a change of consciousness about where you shop, especially in San Francisco, where we advocate everything locally grown and sewn,” notes Magee, who personally sells her bikinis, which are priced between $136 and $146 and are made of Italian fabric and fittings at a garment contractor next door. “If I were in L.A., I don’t think people would really give a crap.”

Besides her Joy O line being locally made, Mission jewelry designer Joy Opfer said consumers are responding well to her eco-conscious creations, such as her recently launched line of recycled steel and glass accessories, sold at the Studio 3579 cooperative, wholesale and online.

At The Mission Statement collective on 16th Street, locally made goods such as Inna Jam preserves from fruit grown in the city also are sharing shelves to boost sales at the cooperative of seven fashion designers.

“The Mission is definitely suited for what I do,” says men’s wear designer Estrella Tadeo of The Mission Statement, whose tailored designs have a streetwear flare.

Classic sportswear designer Sunhee Moon credits customer loyalty to her San Francisco–made sportswear and its fit for pulling her business through in the down economy at her 16th Street boutique. She says her customers have kept shopping in the recession, and the store outsells her second city location on Fillmore Street in well-heeled Pacific Heights and a third spot on Union Street, before she closed it last year. Says Moon: “It’s the Mission customer.”