The jury is out on Moda Manhattan and Nouveau Collective's decision to break away from the earlier February trade show schedule.

By Whitney Beckett and Julee Kaplan on March 5, 2008
View Slideshow 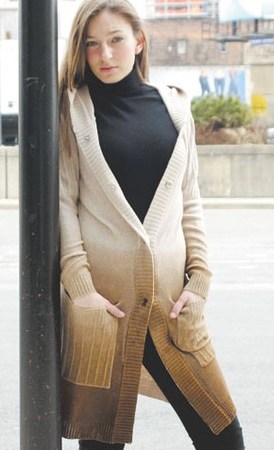 NEW YORK — The jury is out on Moda Manhattan and Nouveau Collective’s decision to break away from the earlier February trade show schedule.

Moda Manhattan and Nouveau Collective, which target the better and moderate markets, showed Sunday through Tuesday, without the anchor of Coterie to bring in out-of-town buyers — and the results were uneven. Although the extra three weeks gave more perspective on trends and accommodated the move toward buying closer to season, some buyers said they resented having to come to New York on a separate trip.

The shows went on their own in March rather than with the rest of the New York trade shows in February after ENK International moved Fashion Coterie to Feb. 10 to 12, about two weeks earlier than usual, virtually overlapping with Project Las Vegas and other trade shows.

Britton Jones, president and chief executive officer of Business Journals Inc., which owns Moda, said the March show had exceeded his expectations, but Jones added that he would wait until getting buyer and exhibitor reactions before deciding whether Moda might stage another March show. Moda was held at the Jacob K. Javits Convention Center rather than at the Metropolitan Pavilion and Altman Building, where it typically showed in February. The event was able to accommodate twice as many exhibitors as usual — 800 versus 400. Halfway into Moda, buyer attendance was already up more than 66 percent compared with last year.

“We are hearing that retailers love to be able to focus on this show without worrying about scheduling and going between shows,” Jones said. “They also now have had a chance to see what is trendy, and they can feel more comfortable placing orders than they did three weeks ago. But if we hear that the retailers resented having to come back to New York for another trip, we will take that to heart. This show is all about the retailer.”

Kirat Anand, president of New York-based contemporary line KAS, which also showed at Platform 2 in February, said he liked Moda’s March move. He said the separation from Coterie hadn’t affected traffic volume. “The difference is there are a lot more local people — about 80 percent are from New York and New England,” he said, noting that buyers’ tendency to buy closer to season, because of economic uncertainty made the later timing a plus.

“In February, people weren’t ready to look at fall,” Anand said. “Now they should be ready, though they are still stuck in spring. We’ve been trying to show people September and October, but people are writing close — even 4/1 and 5/1. But people are here to spend.”

For spring, buyers targeted KAS’ yellows, greens and blues, and for fall, jewel tones were popular. Ombré was another trend. KAS was strong with its tops — tunics and blouses — which wholesale from $58 to $64. “There’s been a big push from dresses to blouses,” Anand said. “The last four seasons have been all dresses, and retailers are filling a void in blouses now.”

Better knit resource Ava, which wholesales from $48 to $100 and launched for spring to target specialty stores, scored with ombré and printed sweaters. And shaped knit jackets and soft knit jackets — a cardigan cousin — sold well. “Retailers realized that their stores got very solid [in color schemes], and they know that whatever they buy now has to be different,” said Betsy Barnett, Ava sales rep. “If I were a basic resource, I would be concerned right now. Buyers want their customers to say they have to have it. ”

Barnett, who also showed Ava at Coterie three weeks ago, said she found that buyers were more focused at this show, though they still looked around before buying, which she attributed to the economy.

Barbara Clark, president of New York-based BClark Designs, endorsed the March date. “This is a great date — it just has to become a habit,” Clark said. “Because this is a later date, more people left orders, and they are more focused, not jumping between here and the Piers.”

Not all exhibitors were sold on the change. New York-based bridge line J’envie has shown with Moda in its traditional February spot, and Jane Immerman, sales rep for J’envie, said she thought there were fewer buyers. “Traffic was a little off because it’s three weeks later than Coterie, and I think a lot of buyers were thinking that if they were just here for that, they might wait until the regional shows,” Immerman said.

At Nouveau Collective, the retailers who were at the Park Central New York hotel seemed unhappy with the date change. The show was quiet on Monday as exhibitors sat in their booths waiting for the traffic to pick up.

“I’m frustrated and very disappointed,” said Phyllis Como, owner of the Hunt Valley, Md.-based specialty store The Wardrobe. “I really think that all the shows should have been held at the same time. It makes it so hard for us this way.”

Como said exhibitors do not seem to have a clear vision of what they are selling. “There has to be a clear direction,” she said. “I’m here buying fall and the store next to me is buying summer. I do understand that because of the economy, there are people who want to buy closer to season, which is fine, then show us what you have for immediates and don’t show us fall if we can’t think that far ahead.”

Patti Bavis-Puller, owner of a specialty store called Chezelle, in Baltimore, said the shows should have been at the same time as Coterie.

“I think it was a real problem for the organizers, but it does make it harder for all of us,” she said. “I came here instead of going to the shows in Vegas, because I couldn’t afford to do both. And I was just in New York for the Coterie, and have to come back here next week for my showroom appointments. It’s a lot of traveling for someone who has a small store.”

But Nouveau Collective organizer Joanne Feinstein said she was pleased.

“I have a very loyal group of exhibitors who came out to show, and while we don’t have as many exhibitors as we usually do, I’m happy it’s a small show,” she said. “It does seem like there are a lot of buyers who didn’t come back into the city to shop after the ENK shows, and I understand they are carefully watching how they spend since the economy is heading downward.”

Feinstein said she had 53 booths carrying 109 labels, which was just the right amount for the retailers in attendance.

“I think that there are pockets of the country that aren’t feeling a recession, so those areas are happy with what they see at this show,” she said, mentioning that vacation spots like Palm Beach, Fla., seem to be doing well. “It’s the seasoned exhibitors that we have here who target these stores.”

Feinstein said she will take Nouveau Collective back to the New Yorker Hotel here in May, where there is more space for exhibitors. She is also working on putting together a runway event for the next show as well as new amenities for buyers. In addition, she is trying to develop a virtual trade show, which she hopes to get online.

Meanwhile, at the Milano Bags booth, sales representative Angelica Landauro Friedman was attending Nouveau Collective for the first time to introduce the line. Landauro Friedman said although the show seemed slow, she thought it would be a good place to launch her leather, lightweight bags.

“They are very comfortable to wear on your shoulder, and people like that they have such a large selection of colors to choose from,” she said.

Landauro Friedman, who is based in Norfolk, Va., said turquoise and tan were the most popular colors. The bags wholesale from $70 to $100.

At the Etc. booth, president Stacey Baronowski also said traffic was down compared with previous seasons, but she got some decent orders. Based in Brooklyn, N.Y., the company’s knit ponchos were booking well, as were the new chunky sweater coats in rich colors like dark red, brown and green. The Etc. line’s average wholesale price is about $35.

“We are doing well with a lot of the darker shades,” she said.