Last month’s fashion week demonstrated that a robust economy is not necessarily having a ripple effect on sales. 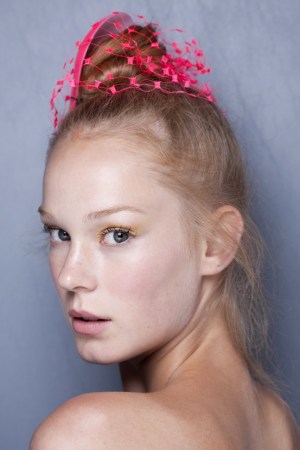 RIO DE JANEIRO — Last month’s fashion week registered only modest gains for fashion houses and demonstrated that a robust economy is not necessarily having a ripple effect on sales.

Rio-à-Porter featured 108 vendors, down from the 169 exhibitors at the year-ago edition, because it relocated from a converted pier warehouse (where Fashion Rio is still held) to a smaller former mansion and its grounds. Organizers estimated a 10 percent increase in orders among the vendors who took part in both editions. The January 2011 event had registered a 16 percent increase in orders.

“There was a drop in the percentage increase of orders at this Rio-à-Porter, compared to the growth in January 2011 over January 2010, most likely because in 2011, the economy grew much less than it did in 2010,” said Graça Cabral, institutional relations and strategic partnerships director of Grupo Luminosidade, the organizing body.

This was the last edition of Fashion Rio to be held in January, added Cabral. Instead, starting in 2013, there will be one Fashion Rio in May, showing spring collections, as well as a Rio resort season event in late August or early September that showcases high-summer collections.

“In Rio, we are putting more emphasis on summer apparel because of the city’s hot climate and casual lifestyle,” she said, noting the climate makes Rio less ideal to showcase winter lines.

Brazil’s economy registered 3 percent growth in 2011, down from 7.5 percent in 2010, and similar growth is expected this year.

Fashion Business featured 300 vendors and rang up 830 million reais ($478 million) in orders, a 9.2 percent increase, compared to a 16 percent increase at the year-ago edition, which had 310 exhibitors.

“Fashion Business sales figures should tend to remain stable because the public we cater to — the middle and upper-middle class — has not grown for some time,” said Eloysa Simão, a Fashion Business organizer.

Fashion Rio/Rio-à-Porter and Fashion Business both drew 90,000 trade visitors, most of them domestic, although there was a smattering of international retailers from over a dozen countries.
Here are some retailer favorites:

Two such pieces were a multicolored short coat ($56 wholesale) and a heavy cotton jersey blazer with a jaguar print ($46).

• Rula Pantelis, buyer for Mariko Boutique, a Perth, Australia, shop, liked Filhas de Gaia because “I could never find its edgy summer dresses in Australia, where the fashion is safer and darker.” She cited the brand’s lemon-yellow, one-shoulder silk evening dresses with a big gray flower print ($500).

• Antonia Maggiar, who coordinates buying for shops inside six boutique hotels managed by Paris-based G.L.A. Hotels, liked Maria Bonita Extra’s denim biker jackets, brushed to resemble suede ($131) because “they were no more expensive than European brands and had nice cuts and details.”

• Elena Mencakova, buyer for Sufana, a chain of Bahrain boutiques, found “elegant but not flashy dresses that suit my older, more conservative clients” at Espaço Fashion. She cited the brand’s camel-colored silk and polyester blouses ($50) and long pleated beige silk skirts with a leather waistband ($228) for their “climate-friendly, lightweight way of tastefully concealing the body.”

• Tereciña Leite, buyer for the high-end Te Modas boutique in Montevideo, Uruguay, said Alessa’s silk kaftans with digital prints of U.S. and European stamps and postmarks ($228) “had a striking, one-of-a-kind style that my clients demand. Yes, they were expensive, but I don’t mind lowering my margins to maintain loyal clients looking for a very different product.”

• David Pirnia, with Pirnia Collection, a London-based distributor for mid-to-high-end European and Middle Eastern boutiques, is buying from Totem for the second straight season because “the brand moved well last season and it offers playful cuts and prints at accessible prices.” This time around, he’s buying short jumpsuits with a green flower print. He buys them for $35 and wholesales to his retail accounts for $75.

“These bikinis were pricy,” said Faxas. “But Brazilian swimwear is well positioned in my country, Salinas is a well-known Rio brand and my clients will pay more for bikinis with mixed prints [on tops and bottoms] and high-end finishing.”

Brazil’s economic growth has not translated into gains for mainstream fashion houses. A drop in unemployment, along with the government increasing the minimum salary numerous times in the last 10 years, and having offered welfare to low-income families since 2003, has helped expand the lower echelons of the middle class.

Economists and fashion industry insiders say that this income growth has lifted the upper echelon of the working class into the lower middle class (those earning the equivalent of $20,000 a year). They add that a growing demand for qualified professionals has also boosted the income of the upper-middle class, whose income is the equivalent of $55,000 to $135,000 a year.

But they say the growth and spending power of average middle-class earners (income of $20,000 to $55,000 a year), who mainly buy mainstream brands, has been stifled by the rising cost of private education, maid and nanny salaries and other services.

“Fashion industry growth is being fueled by the lower-middle class, those earning the equivalent of $20,000 a year, or the upper middle class, with income of $55,000 to $135,000 a year,” said Carlos Ferreirinha, president of MCF Consultoria & Conhecimento, a retail and luxury consulting company in São Paulo. “Average middle class earners are not spending money on fashion because service industries have soaked up their disposable income.”

Economist Roberto Teixeira da Costa agreed. “In Brazil, the bottom and top echelons of the middle class pyramid are growing much more quickly than its vast midsection. The lower echelons of that social pyramid are using their disposable income to buy more basic necessities, like TVs and refrigerators, not fashion, unless it’s from low-end department stores,” he said.

But a July 2011 Boston Consulting Group report, “Consumer Sentiment Barometer,” said that Brazilians were “trading up” — replacing lower level products with higher level ones — in cars, white goods and apparel, but “trading down” on luxury items.

Silvio Passarelli, the director of the luxury management program at FAAP, a private São Paulo university, doesn’t, however, believe that Brazilians are buying less luxury apparel. “An increase in upper-middle class salaries is why high-end domestic and foreign fashion labels are still flourishing and coming here,” he said. “But the vast middle class, with little disposable income, is why the second-tier domestic and foreign brands that they buy aren’t thriving or expanding.”

Passarelli added that “this is one reason why top foreign brands like Prada and Louis Vuitton have entered Brazil, but why second-tier ones — H&M, Gap and Uniqlo — have not.”

Spanish fast-fashion chain Zara, with 13 stores in Brazil, is an exception. It plans to inaugurate a store at JK Iguatemi, a high-end mall opening in April, in São Paulo. Carlos Jereissati Filho, president of a group that is one of Brazil’s biggest high-end mall operators, including JK Iguatemi, said that “sales at our malls are growing at 30 percent a year, mainly because of the increased upper-middle class purchasing power. But the soon-to-open Zara store in JK Iguatemi is a sign that middle class purchasing power has not subsided.”

Ferreirinha, however, explained that “import taxes of up to 35 percent have priced Zara apparel so high here that it is seen as a premium brand, which is why both the middle and upper-middle class buy it. But those high import taxes have discouraged other second-tier fashion brands from entering Brazil.”

“Our sales grew by only 5 percent in 2011 and aren’t expected to grow in 2012 because our clientele hasn’t grown much,” added Siaulin Lieu, the commercial director of Maria Bonita Extra, with 15 boutiques and five franchises nationwide.

Iris Costa, commercial coordinator of Ellus Second Floor, with 11 domestic stores and one of Brazil’s biggest fashion jeans labels, said that “almost all of those who pay $150 for a pair of our jeans have bought from us before. Emerging middle class buyers who have never heard of us rarely walk into our stores.”

And Fred d’Orey, the owner of Totem, with 10 boutiques in Rio and São Paulo, said, “Brazilians entering the lower-middle class are not buying mainstream fashion labels like ours, whose average price for dresses is $150, because they can find cheaper apparel, much of it from China, at discount department stores.”

Perhaps this is why apparel sales at the second-tier department stores are booming. Riachuelo, the country’s second-largest low-end department store chain, with 150 stores, grew sales by 20 percent in both 2010 and 2011.

Passarelli added, “Local apparel makers who supply these low-cost department stores are, despite economic growth, also not doing well because their prices have to compete with the Chinese, which greatly reduces their margins.”

Passarelli added that, “although sales at stores carrying mainstream labels aren’t increasing, lower-cost, multibrand stores are opening in cities of 12,000 to 15,000 residents that previously didn’t have this option for the growing lower-middle class.”

Suely Delmondez, owner of Viva, a mid-to-high-end multibrand store in the big northeastern city of Salvador, who bought mainstream labels at Fashion Rio, agreed. “Our sales in 2011 grew 10 to 15 percent, not because we attracted a clientele with a broader range of incomes,” she said. “They grew because our regular clients increasingly prefer to do one-stop shopping.”