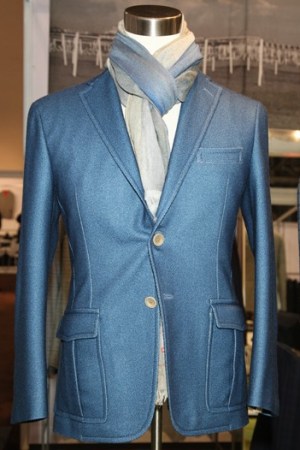 MRket NY achieved critical mass this season as traditional classification vendors and Italian luxury brands appeared to adopt the new event as their trade show of choice in New York. More than 250 brands exhibited, a 132 percent increase over the summer edition.

Many of the newcomers were brands that, buoyed by signs of a better economy, returned after skipping the New York market for some time. One was George Weintraub & Sons, primarily a topcoat and rainwear resource for department stores, which exhibited on the trade show circuit this time in hopes of picking up specialty store business. Same with Jams World, the latest incarnation of the Eighties brand known for its colorful printed boardshorts. Jams is primarily a women’s resort label now but it hit the New York market after a seven-year absence with plans to pitch men’s stores with its line of custom print camp shirts.

Those brands shared the growing consensus that the apparel market had turned a corner and the worst of the economic maelstrom was over. But the recession continued to cast a pall over dealings at the Jacob K. Javits Convention Center. D’Avenza, an Italian brand specializing in high-end, handmade garments, dropped prices 30 percent to keep in line with more price-conscious luxury shoppers. Along with the palatable price came more muted colors for its array of casually elegant sport coats in soft lambs wool and cashmere.

Value was also a watchword at sport shirt maker Thomas Dean & Co., which debuted a lower-price line at the show called Lochlane. Retailing at $79.50, the collection, rich in classic windowpanes and checks cut in washed cottons, is also playing on the American preppy trend that has been coursing through men’s wear. “It’s an American-style shirt and people have been very receptive,” said Thomas Dean principal Thomas Bonomo. “Everyone here is in business and wants to do business. There’s much less talk of immediates.”

Overall, there was less talk of economic Armageddon and more of the familiar patter of product and merchandising. Luxe outerwear expert Andrew Marc was one exhibitor that emphasized newness in its lineup. The brand is keeping pace with the contemporary customer via fresh new styles, such as a gray leather bomber, bibbed wool blazer and superlight puffer.