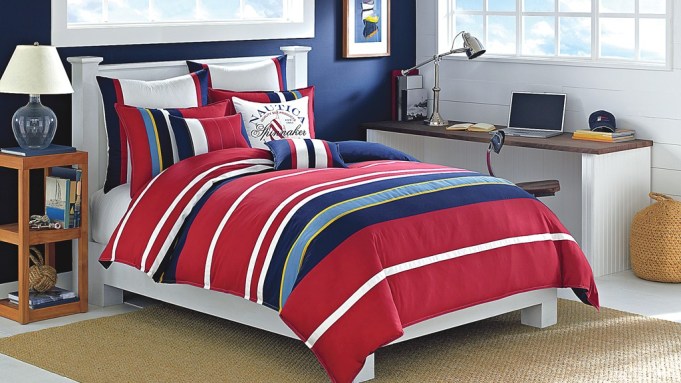 From umbrellas and beach towels to footwear and fashion bedding, and from Europe to Asia to South America, Nautica’s reach is far and wide.

And overseeing the massive international effort is Maria Vicari, president of global licensing for the brand.

An eight-year veteran of the company, Vicari has an industry pedigree that includes 20 years with GFT working on Ungaro, Valentino and Joseph Abboud, as well as a stint at Saks Fifth Avenue working with then-men’s general merchandise manager Roger Farah, who is now president of Ralph Lauren.

When Vicari joined Nautica, the licensing program was already established. In fact, the brand has had international licenses in Canada and Mexico —  “above and below the border,” as she puts it — for 29 years.

But under her tutelage, the company’s licensing arm has grown substantially, and today there are 40 operators domestically and abroad, overseeing 59 categories of product that account for annual sales of more than $500 million.

“Licensing is a big source of revenue and a brand-building component,” Vicari said. “It’s a big endeavor.”
The business is broken down into two distinct categories: domestic licensed product and international licensing, she explained.

The domestic products are those that are “noncore competencies” for Nautica, like luggage and tabletop. The most successful in terms of volume are watches, fragrance, children’s wear and home products, Vicari said.

The international arm, which includes distributors, counts 22 operators in almost 75 countries. These partners operate some 200 freestanding Nautica stores as well as 1,000 in-store shops.

Vicari noted that Timex, Coty and Marchon, its watch, fragrance and eyewear licensees, respectively, hold global licenses for the brand and sell the Nautica product around the world.

In the States, Nautica is primarily a men’s brand with women’s sportswear slated to launch here for spring under the direction of the in-house Nautica team. But overseas, she pointed out, most of the partners “operate a dual-gender platform.” The largest international market is Greater China, which accounts for 27 percent of total sales. There are 366 points of sale there, including freestanding stores as well as in-store shops in department stores like Isetan, Parkson, Sogo, New World, Mitsukoshi and Takishimaya. There are nine Nautica Kids stores in China and Vicari said there is “potential for growth there.”

Other large international markets include Mexico and Latin America, which have more than 300 points of sale. Product categories sold in those countries include women’s, home furnishings and children’s in addition to men’s wear. The Middle East boasts freestanding men’s, women’s and children’s stores in Dubai, Abu Dhabi, Kuwait, Qatar, Saudi Arabia and Israel.

There are no longer any full-price Nautica retail outposts in the U.S., although Vicari said it is definitely in the company’s sights.

“We’re working on it,” she said. “It’ll be one of our strategies going forward.”

With such a wide-ranging network, Vicari categorized Nautica’s licensing efforts as “a mature business.” And with rare exceptions, there aren’t a lot of other categories where Nautica hopes to plant stakes. “I get calls all day long with some of the most bizarre requests,” she said, shaking her head. “But we have specific guardrails and guidelines [for what products we’ll put the Nautica name on], and we consider if it will be brand-equity building. We also look at the kinds of distribution it would get and whether it would enhance the brand experience with the consumer. If the answers to those questions are not ‘Yes,’ we won’t consider the category.”

And, she added with a laugh, “We’re very controlling. It’s not easy being our licensee. We control every part of the contract negotiation and compliance.”

When deciding whether to enter a category, Vicari said the company “discerns what’s worth the effort. If it’s small, it won’t have a future. And it also has to be nothing that would be brand-eroding.”

That said, however, bags and footwear are two product categories where “enhancements are up for consideration,” Vicari said. “But with the exception of women’s accessories, we’re pretty much there.”

So instead of entering a lot of new categories, the “strategy for the next five years,” she said, is for “organic growth and international expansion.”

The plan is to concentrate on emerging markets and Nautica is expected to reveal shortly that it has lined up a partner in Russia. Turkey and Brazil are also seen as key growth opportunities for the brand and the company recently started a full-price business in India.

In the third quarter of 2012, Nautica signed a deal with Amanex for the manufacture and distribution of a performance lifestyle collection available exclusively in Korea. The collection includes men’s and women’s performance apparel and accessories, including backpacks, socks, hats, gloves, underwear and scarves. The items are designed to be functional with water-resistant qualities and technical fabrics. The plan is to open between 75 and 100 Nautica accounts by 2016 with distribution in in-store shops in department stores and freestanding Nautica units.

This deal is a “pioneering” one for Nautica, Vicari said, since it focuses on one particular product category — performance apparel. “Our positioning there is unique,” she said, noting that the products offered in that country center around “water and lifestyle” and have been received well.

Outerwear is also expected to be a big business there. “Korea is a very outerwear-centric market,” she added.

Vicari said that when it comes to licensing, one size doesn’t fit all, particularly outside the U.S. borders.

“The model is different, depending upon the country,” she explained. “A lot of countries don’t have department stores, so we’ll have more distribution in independent specialty stores.”

As a result of its breadth of product and distribution network, the Nautica brand is “incredibly well-known outside this country,” Vicari said. “The unaided awareness of the brand is astounding. There are very few markets where we’re not known. And the reception to the brand is very strong.”

She said with some exceptions for local variances, the product that is sold overseas is the same as that offered in the U.S.

As a result, it is imperative that all product sporting the Nautica name be consistent in terms of seasonal fashion trends.

“Our product development team works with [creative director] Chris Cox to ensure the brand direction is articulated each season,” she said, adding that “they control the approval process, which is very involved.”

Licensees are invited to the company’s showroom to see the season’s fashion focus and work with the design team to brainstorm on how best to translate the trends into their particular product categories. So when customers buy anything from a pair of shoes to a suit or even sheets for their children, they can be assured it got the nod from the top.

Fashion bedding and bath in U.S. and Mexico: Revman

Dayan: Apparel and accessories in Mexico and South America