The Intrepid received a full refurbishment, so the World War II-era aircraft carrier was a fitting locale for Nautica to stage its fall men's wear presentation. 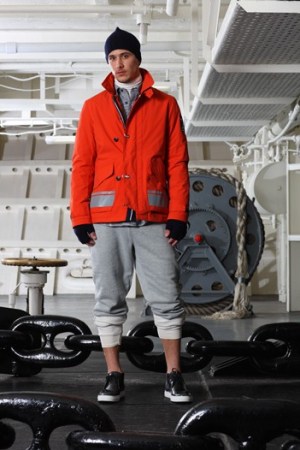 The USS Intrepid just received a stern-to-bow refurbishment, so the World War II-era aircraft carrier was a fitting locale for Nautica to stage its fall men’s wear presentation last Wednesday. The VF Corp.-owned brand has suffered from an extended decline at retail, and a new leadership team, led by Karen Murray, president of VF’s sportswear coalition, has been working to revive the brand over the last year by giving it a head-to-toe makeover.

“We established a good baseline for this spring, and now we’re trying to push it for fall, and bring our licensees with us,” said Chris Cox, vice president of design and creative at Nautica, who was showing his second full collection for the brand. A phalanx of models was arrayed on an interior deck of the warship-cum-museum, which is docked on New York’s Hudson River, wearing Nautica’s core in-house sportswear, as well as licensed categories such as tailored clothing and dress shirts from Smart Apparel, neckwear from Superba and topcoats from Levy Group.

“We’ve cleaned things up a bit, but we didn’t go too directional. We don’t want to alienate anyone who’s already with the brand,” said Cox.

Naval and fisherman influences provided an overall theme for the fall collection, with outerwear a key focus for the season, said Julia Ripperger, vice president of merchandising and product development. The lineup included trenchcoats and sportcoats in waterproof fabrics, heavy-knit sweaters and two- and three-button tailored suits with slightly shorter jackets and slimmer pants.

Nautica brand revenue declined 11 percent in 2008, due to difficult market conditions in department stores — a channel where it is the second largest men’s collection business. To help grow sales, Cox said prices for Nautica’s fall product will be “down slightly” compared with spring merchandise. “Our goal is to never strip down product, but it has to be at a sharper price,” he noted.