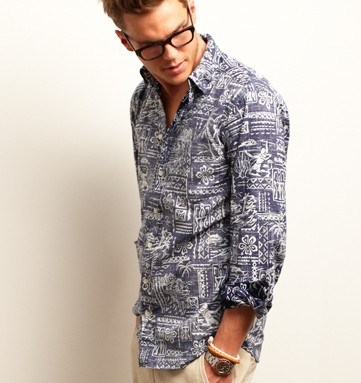 With six men’s trade shows starting in New York on Sunday and Monday, retailers have a multitude of fall collections to shop. Here are 10 brands showcasing new or notable offerings.

“I grew up with this label living in San Diego, and there’s so much heritage and story behind it,” said Thompson, who splits his time between Honolulu, where Reyn Spooner is based, and Los Angeles. “Our goal is to update the brand, with new fits and a contemporary attitude. We’re keeping the Hawaii vibe but making it modern, injecting a little bit of East Coast prep and making it appropriate for places like the Hamptons, Palm Beach, Nantucket and South Beach.”

Thompson was tapped last year to help reinvent Reyn Spooner by Wedbush Capital Partners, a Los Angeles-based private equity firm that acquired a controlling stake in the brand in 2008 from Tim McCullough, son of brand founder Reyn McCullough. The deal also included Reyn’s, a string of men’s wear shops on the Hawaiian islands.

Thompson has access to an archive of more than 2,000 original Reyn Spooner print designs, incorporating them into a tightly edited collection of long- and short-sleeve shirts, shorts, pants and swimsuits. For fall, the lineup includes tropical weight-corduroy tops, in Monsterra leaf prints or “Kapa Poho Poho” designs, which means “crazy quilt.”

“Everything retails for between $75 and $100,” Thompson said. “This is fun, easy product that can get guys excited about shopping again.”

Known for its high-performance outerwear, Arc’teryx last year launched a fashion-oriented collection for everyday city wear under the Veilance Arc’teryx name. For fall, the company is debuting at Capsule to expand the line’s distribution beyond e-commerce and the one specialty store account it has: The Tannery in Boston.

For fall, the line encompasses about 25 styles, including base layers, shirts, pants, jackets, blazers and coats, all in a minimally designed aesthetic and many in Gore-Tex fabric. Prices range from about $175 for a T-shirt to $1,000 for a field jacket.

Jewelry maker King Baby launched an apparel collection last year and in its second season will show an Americana-themed lineup of hoodies, T-shirts, henleys and leather jackets for fall. The range encompasses King Baby’s rock ’n’ roll vibe and features sterling silver hardware, such as zipper pulls, on many pieces.

Binder has been careful to keep the apparel portion of his business tightly centered. “We’re new at this, so we are keeping the line focused,” he explained. It has been picked up by about 30 stores for spring, including Neiman Marcus, Holt Renfrew, Lisa Kline and Revolveclothing.com.

In the core jewelry collection, look for the unlikely combination of luxe rosary necklaces fashioned from onyx and sterling silver, as well as pendants in the form of bullet casings. Average prices in the jewelry collection are about $450.

Last fall, DKNY offered sportswear inspired by military uniforms. For 2010, the brand is heading off base to the great outdoors, where traditional hunting style meets the technical slick of winter sports.

Versatility is also a key trend for value-obsessed consumers, and DKNY is stepping up its offering of transitional outerwear with zip-out vests and liners, as well as reversible sweaters, shirts and jackets.

The brand will make its debut at Vanguard, the MRket NY spin-off catering to contemporary brands, where it will exhibit tailored clothing, outerwear, dress shirts and ties, in addition to both and black label sportswear.

After a two-year hibernation, Sharps is looking to renew its partnerships with independent stores at ENK New York as part of that event’s first showcase for men’s grooming products.

The brand, which made its name in 2002 as a premium skin care and hair care line with a no-fuss attitude, was a leader in the men’s grooming movement. But a diffusion line for Target a few years later diluted the brand’s premium image — one its new owners, led by Brit Rory MacParland, want to restore.

Since purchasing Sharps in April 2008, MacParland, the company’s chief executive officer and president, has focused on U.K. expansion, opening stand-alone barbershops and partnering with Topshop.

Now Sharps is setting its sights on the U.S. It’s out of Target and is honing in on the better men’s retail segment with a range of core and reformulated products, MacParland said. At ENK, the brand will debut a scrub, body bar and a range of T-shirts. “We think there is still a major opportunity to upgrade men to midrange, premium grooming products by putting them next to where they buy their jackets or jeans,” he added.

This memorably frigid January in New York City is likely a good time to launch an outerwear collection. Ike Behar will do just that when it returns to MRket this season with an expansive line of coats that echo the classic American luxury of the brand’s dress shirts.

Produced under license by Harbour International, the line tends to gentlemanly classics with nine key styles, each of which is available in a variety of fabrications and trims, as in the classic car coat, cut in either Italian leather, coated cotton, Loro Piana storm system or cashmere.

These heavier pieces are balanced with items suited for warmer climes, as in the lightweight Napa lambskin vest with merino wool back — it weighs 2 pounds — and coats made in moleskin and cotton twills.

Founded in 2007 by Andrew Lee and Stef Zeh, Wet Cement has become a key fashion T-shirt resource at Neiman Marcus, Saks Fifth Avenue, Bloomingdale’s and Nordstrom, along with specialty retailers such as Atrium, Universal Gear and National Jean Co. The designs, which start at $69 and can go as high as $200, feature screened-printed photos and messages the duo manipulate via a creative process involving heated halogen bulbs, a bathtub and a garden hose.

“It’s all done by hand, and everything’s made in L.A.,” said Lee, a former president of the 575 denim label.

At Project, the company will introduce a lower-priced line under the Cement label, with T’s retailing for $29. “This collection is targeted towards the surf and skate crowd with an edgier look, whereas the main Wet Cement line is more about being fresh and fun, with bright colors,” Lee said.

Wet Cement has also created the official T-shirt for Project staffers this season.

The casual influence in tailored clothing has emigrated from Italy to Canada, where Jack Victor has been making increasingly soft and informal jackets. There may be no better example than its Casual Friday Suit — an ironic riff on the trend that decimated the suit business in the Nineties — which is debuting at MRket. The new model has the hallmarks of relaxed tailoring: thin canvas and shoulder components, patch pocket and self-cloth elbow patch. Item-driven sport coats, including wool corduroy jackets and evening-ready velvet jackets, will also be key components to the fall collection.

Bottoms brand Riviera will also be exhibiting with Jack Victor — a first since the latter purchased the trouser resource last summer. The Canadian brand will highlight a new range of fancy and plaid slacks in its best label, Riviera Black, and will introduce a new traveler trouser in its Blue line.

Casual, understated sportswear with a focus on color, fabrics and design details are the selling points of London-based Folk, which will show at Capsule for the second time this season.

“We have classic silhouettes, but I think we pay more attention to color and subtle details, like the Carozo buttons on our shirts, than other brands,” said Fraser Shand, managing director of the company.

Founded as a men’s label by Cathal McAteer in 2001, Folk operates two freestanding stores in London and wholesales to about 150 accounts worldwide, including a handful of U.S. doors such as Douglas Fir, Odin, Bblessing and Ian.

The brand’s biggest markets are the U.K., Scandinavia, The Netherlands and Italy, but the company hopes to grow the U.S business to 20 to 30 stores. “The U.S. is a new market for us, but we’ve gotten a good response from Americans to our e-commerce site,” Shand said.

The company also operates a men’s and women’s footwear brand called Shofolk, which launched in 2004.

Ben Sherman’s love affair with rock ’n’ roll continues next season with a capsule collection inspired by British punk-ska veterans Madness, the London-based band best known for the single “Our House.” The seven-piece collection consists of a Harrington jacket; three sport shirts; a pique Polo with the Madness logo, and two T-shirts using iconic graphics from the band’s history.

The U.K. company will also be tempting specialty store buyers with a fall collection inflected by the British outdoors and on-trend workwear styles.