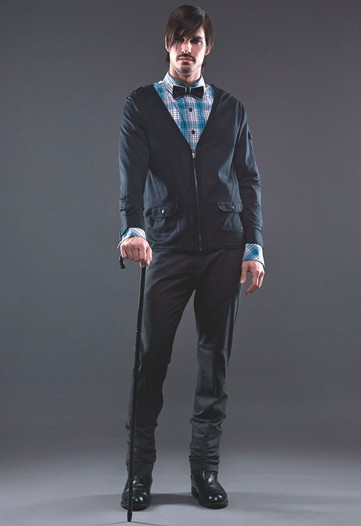 Los Angeles-based Civil Society, owned by Urgent Gear, is a collision of traditional tailoring and SoCal rock sensibility that has been the raison d’être for other local brands such as Howe and Elmer Ave. Aside from a few color pops like a Nineties bright teal, the collection features a surly, black and white palette. “We’re not high fashion, but we’re tying to extract fashionable elements that are wearable and fit into anyone’s wardrobe,” said head designer Brad Schwartz.

A former designer at Robert Graham and Defiance USA (parent company of English Laundry and Fender Custom Shop), Schwartz has brought details such as double-breasted plackets and subtle, tonal embroidery to the brand, which retails its shirts for between $69 and $98 at department stores like Nordstrom. “They’re comparable to the most tricked-out wovens out there,” he said of the shirts, some of which sport matching ties.

Other value-conscious items include a double-breasted fleece jacket with diagonal pockets, a zip-front cardigan and a perforated nylon jacket, each wholesaling for $129.

To men’s wear aficionados, NSF means two things: innovative knits and basic, overdyed premium T-shirts. Now designer Nick Friedberg wants to add a few new pieces to his California-casual equation. “If you establish success with a certain product, you have to keep adding to it,” Friedberg said of his new wool trousers, brushed-plaid woven shirts and leather jackets with chunky merino shoulders, which retail at $895.

For fall, bottoms such as the $150 Calhoun trouser are cut from Japanese corduroy, sport a lower rise and offer a slimmer, straight-leg fit “for someone who wants a more aggressive look, something a little more forward than Gap or J. Crew,” he said. Other pant offerings, such as the wool-viscose Harold style, are equally suitable for dress-up or dress-down occasions, he added.

Popular with upscale retailers like Barneys Co-op and boutiques such as Lisa Kline, NSF also will offer $150 wovens with white contrast cuffs and slub jersey polos in neutral colors.

Fall knits are classic with careful details. The Beck wool-cashmere blend sweater, $295, for example, features a classic jacquard pattern, in line with the longshoreman-chic trend perpetrated by a slew of East Coast men’s brands.

A major player in the action-sports trade show circuit, the Quiksilver-owned DC Shoes is ramping up its Project Las Vegas presence this season with a mix of street, workwear and preppy attire.

Though printed fleece has been a major driver for the brand in recent seasons, a prep school influence dominates for fall, with plaid chinos, lightweight knits and varsity jackets among the key pieces. “The urban market sees Pharrell or Kanye West dressing up these days, so they’re looking for cardigans, and they’re into classic pieces with a little twist,” said Mondo Marron, DC Shoes’ vice president of apparel design.

Blue-collar gear is also in the mix, with lumberjack woven shirts and buffalo plaid jackets with sherpa linings.

DC’s Life Collection, a limited, premium line of footwear and apparel, enters its second season with expanded men’s offerings, such as $258 cashmere-blend hoodies with cable-knit accents and resin-coated denim in straight and loose fits. “[Life] has the same styling that we do in our main line, but we’re able not to spare any expense when it comes to quality and detail,” Marron said.

For its Double Label collaboration project, the brand has created New Wave-inspired leather jackets and $34 T-shirts with Sixpack, a French apparel company with an extensive guest artist program.

Agave Nectar will get a sweeter look this fall, thanks to Ya-el Torbati.

Torbati, a fixture in the women’s premium denim industry through previous stints as Yanuk’s founding designer and the head of Deener, is consulting with Agave’s women’s brand to add more fashion denim for the contemporary customer.

“The whole boyfriend, destroyed thing — that is not the Nectar customer,” Torbati said. “They’re into a cleaner, tailored look.”

Such a look is achieved with welt openings embedded in back pockets, a more precise fit and the addition of skirts, jackets, tailored trousers and high-waisted jeans. Moreover, the fabric portfolio expands to encompass corduroy, herringbone, pinstripes, purple-cast denim and piqué dots. Retail prices range from $205 to $225.

Torbati also adds feminine touches to the line, which launched in 2005, three years after the founding of Vancouver, Wash.-based Agave. Not only does she overlap delicate drawings of a teal-colored agave plant on the pocket lining, but she also tweaks the back pocket embroidery into an abstract hourglass figure.

Even a Goth girl needs a bit of pizzazz.

Erik Hart, the Los Angeles designer who creates darkly urbane clothes for his namesake contemporary line as well as for the more street-savvy brand Morphine Generation, finesses his signature industrial aesthetic into a refined 24-piece jewelry collection making its debut for fall.

On both a ring and bracelet from the line, a gold-plated panel is marked with a tiny dot in each corner to suggest it is soldered on top of a wide steel band. “It’s based around the bolt,” Hart said.

For the woman who prefers some sparkle, cubic zirconium shines from a starburst bracelet that could have been borrowed from an Art Deco aristocrat’s wardrobe.

Aware of the need for affordability and versatility in the current economy — retail prices are mostly under $300 — Hart also offers bouquets of crystal arrows attached to clips that can be worn on the ears or a lapel. Long, skinny chains mixed with different metals also could be easily looped around the neck or waist.

After outfitting songbirds such as Beyoncé Knowles, Gwen Stefani, M.I.A., Santogold and Peaches in patchwork lace leggings and other daring looks, Los Angeles-based designer Brian Lichtenberg has drummed up a unisex collection produced in collaboration with streetwear label Kill City.

Lichtenberg offers what he thinks every rocker needs this fall — skinny jeans bisected with zippers, faded black denim splattered with paint, a tattered tank top emblazoned with an image of a twisted dagger and a denim racer-back vest punked up with studs along the collar.

“I focus a lot of my stuff on custom pieces for musicians,” said Lichtenberg, who previously joined creative forces with Grey Ant and Alex & Chloe on collaborations for sportswear and jewelry, respectively. “Of course, I’d love to have my own jean line, but it takes so much energy because of fit issues — shrinkage and whatever.”

An e-mail he sent to Los Angeles-based Kill City in December led to the opportunity to fulfill his denim dream. Cut to fit men and women, the jeans run in sizes 25 to 32, while the tank and vest are available in small, medium and large. Retail prices — ranging from $45 for the tank to $160 for the zippered jeans — won’t drain a band’s beer fund.