Brands to Check Out at the Fall Market in Vegas

Here are some new and noteworthy men's and women's brands exhibiting at Project, WWDMAGIC and Liberty Fairs.

By Jean E. Palmieri and Obi Anyanwu and Kali Hays on February 5, 2020

Brooklyn Cloth was born from the minds of Icer Brands’ owner Norman Jemal and Daron Jacob, head of creative, who witnessed the movement of trends in women’s wear and saw an opportunity to speak to those trends in men’s wear as well as through elevated fabrication, textiles and patterns.

“All of our fabrics have been elevated and have dimension to them. Today, the fabrics we make and use start from the yarn level,” said Jacob. “I’ve always loved the challenge of making things truly marketable that can touch many people, and cross over demographics, price points and distribution channels. Our lives are constantly evolving and we thought our brand will continue to evolve, as well.” 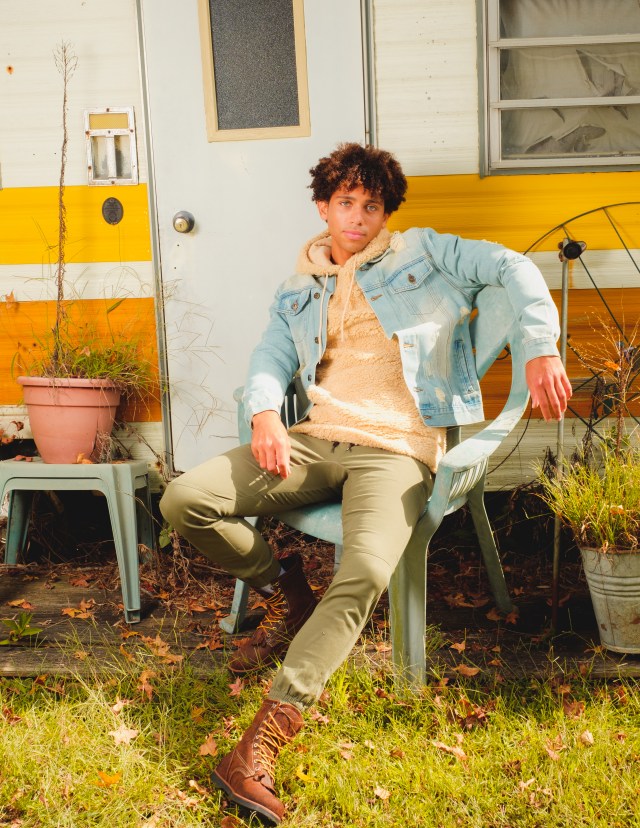 Brooklyn Cloth gained notoriety from its jogger pant that retails for as low as $40 and complements T-shirts and tank tops that retail for between $18 and $20. It has also gained fans for its availability in the market, having been carried at stores such as Saks Fifth Avenue, Bloomingdale’s, Nordstrom Inc., Urban Outfitters Inc., Tillys, The Buckle Inc., Target Corp. and its own web site.

Jacob said the fall collection touches on color trends related to outdoor, with special washes and dye treatments created through sun and air exposure including the Ombré and Shibori dyes that create a dusty palette.

“We see this idea of product living and evolving resonating beyond fashion,” said Jacob. “I think there is something subliminally drawing us there and we see these other trends happening around it.” — Obi Anyanwu

Cardon cofounders Narae Chung and Jacqueline Oak, former roommates at the Wharton Business School of the University of Pennsylvania, quickly agreed that the men’s personal-care industry in the U.S. was underdeveloped.

Chung moved to the U.S. from Korea and noticed the stark contrasts between men’s skin-care practices in that country and the U.S. and how Korean men take pride in their regimens, which wasn’t necessarily the case in the U.S. She held a consumer research session in her apartment with Oak and discovered that their male classmates possessed an interest in skin care and were open about their insecurities in their skin-care practices.

The duo founded Cardon in 2019 to provide men with skin care products at an accessible price point.

Prior to launching the direct-to-consumer brand, Chung was associate director, growth marketing at Walmart Inc. and worked at Procter & Gamble Co. as brand manager for Olay, Gillette and SK-II. Oak previously served as director of retail strategy at M.M. LaFleur and a brand marketing manager at Quidsi.

At Project, the duo will show an SPF 30 moisturizer, purifying clay cleanser and 3-in-1 hydro boost gel moisturizer that feature ingredients such as cactus extract that dates back to the Aztec era and is believed to have healing properties similar to aloe vera that can treat sunburns. The products retail between $18 and $27 and a quarterly box retails for $55.25. — O.A. 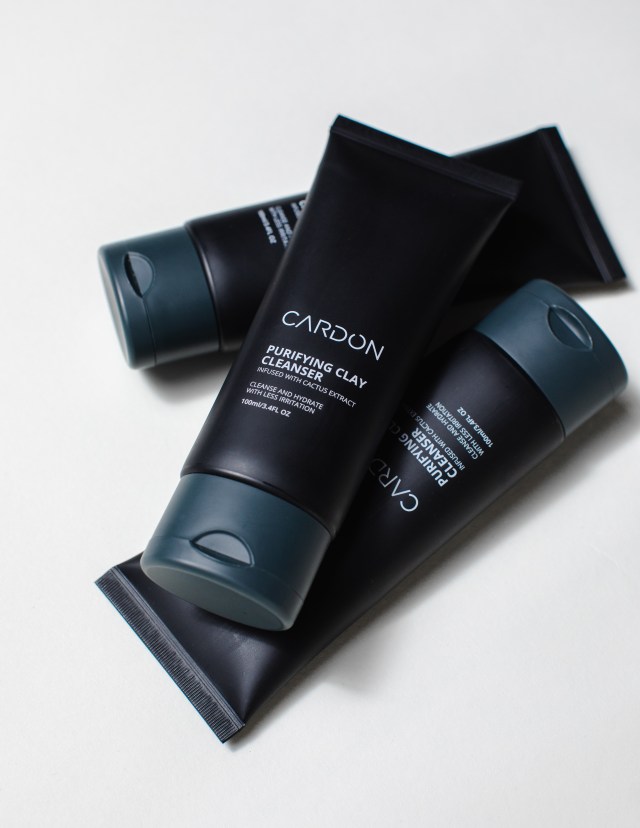 Nick Graham has a new passion project — doing his part to save the planet.

The designer, who founded the Joe Boxer brand and now has his own eponymous collection, will introduce Nick Graham Re.fresh for fall. The collection of dress and sport shirts, collegiate-inspired cardigans, rugby striped sweaters, basic crewnecks, argyle sweaters, long trousers, shorts and bomber jackets feature Graham’s signature witty prints and bold colors, but the collection is made entirely from recycled yarns and materials.

The tag line for Re.fresh is “Smart Product for Modern People,” and the merchandise is made primarily from recycled polyester, which reduces the carbon footprint of the product by 62 percent compared to virgin polyester. All of the polyester will be Global Recycling Standard certified and will be produced overseas.

Although the main Nick Graham collection will still use other fibers such as cotton and wool, Re.fresh will not use any non-polymer-based blended fabrics because of the difficulties in separating two kinds of yarns in the recycling process, Graham said.

“Sustainability is a term that is used a lot, but it’s critical given the industry we’re in,” he continued.

According to industry sources, global apparel production has increased 100 percent over the last 20 years to 100 billion units annually even though the global population has only risen 30 percent. And annual production is projected to reach 300 billion units by 2050, and will be responsible for 25 percent of the growth of carbon emissions over the next 30 years, a 90 percent increase from today. Of all apparel produced, 80 percent of all garments will end up in landfills, with only 1 percent being recycled.

“The numbers are pretty staggering. We as an industry need to change our thinking pretty dramatically,” Graham said.

Polyester, which is no longer viewed as a cheap alternative to natural fibers, is credited for its energy-efficient properties including cold water wash, faster drying time, wrinkle-resistance that avoids ironing, and the fact that it doesn’t need to be laundered as often as cotton. The yarns are also more durable and last longer.

“After looking at all of the options out there, recycled polyester is one of the most efficient materials to help us achieve the goal of reducing the carbon footprint of our product,” Graham said. “It is by no means perfect, there are still many issues with polyester in terms of its release of micro fibers into the environment and other factors, which we will work on, but its use of resources such as water and arable land is minimal compared with other fibers.” 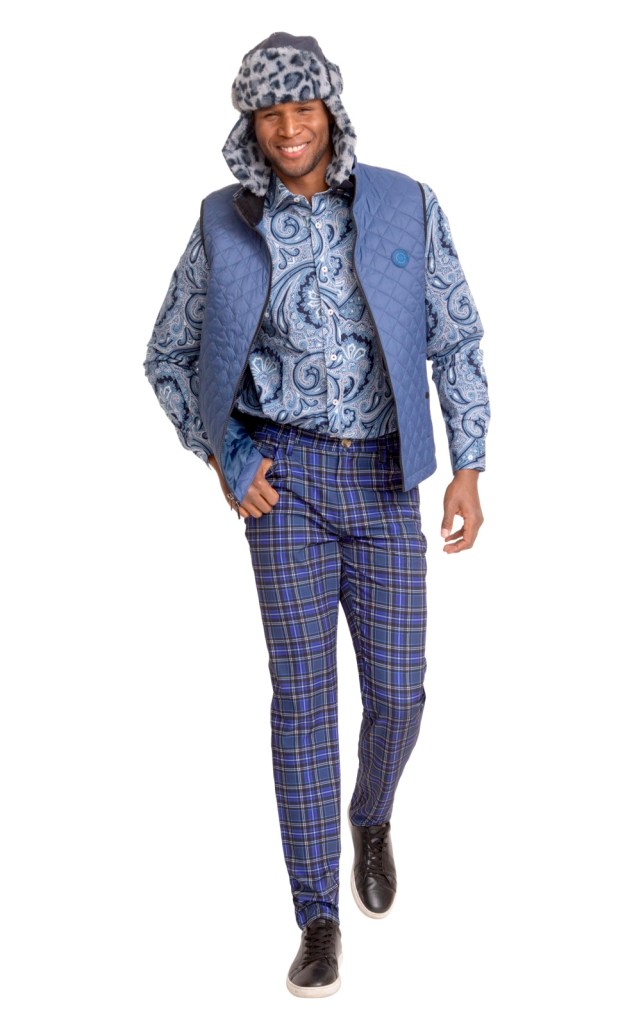 A look from the Nick Graham Re.fresh collection.  Courtesy Photo

But, he stressed, “it still has to look good and be fun.” So the fall collection will offer classic paisleys, plaids and micro florals as well as mountain scenes, wild animal and camouflage prints. There will be no metal used in the collection, so buttons will be used rather than zippers and there are no rivets on the pants.

Retail prices will include $79 for shirts and $89 for sweaters and pants. Re.fresh will be targeted to better department and specialty stores and will also be sold on the company’s web site, which is being relaunched this month. Going forward, Graham will expand into footwear for spring with underwear, loungewear, tailored clothing and accessories on tap for later this year. Women’s wear, fragrance and cosmetics are also on the horizon for the future. — Jean E. Palmieri

Red Wing Shoe Co. traces its roots to 1905 when Charles Beckman, a shoe merchant from Red Wing, Minn., was frustrated by the lack of durable and comfortable boots he found in the market. So he created his own.

Those boots, with their triple-stitched seams, sturdy welt construction and rich leathers, are still the hallmarks of the Red Wing brand.

But after more than a century in the work-boot business, things changed in 2007 when the company partnered with J. Crew to create more lifestyle-skewed models, a move that led to the creation of the Red Wing Heritage division.

Under that division, the brand for fall will introduce its first Gore-Tex waterproof boot, called the Red Wing Heritage 8864 Gore-Tex Moc. Steve Spencer, Red Wing Heritage’s managing director of sales, said the model is Red Wing’s “most iconic,” but this is the first time it is being offered in a waterproof leather version in the Heritage line. There are some waterproof offerings in the work-boot division. 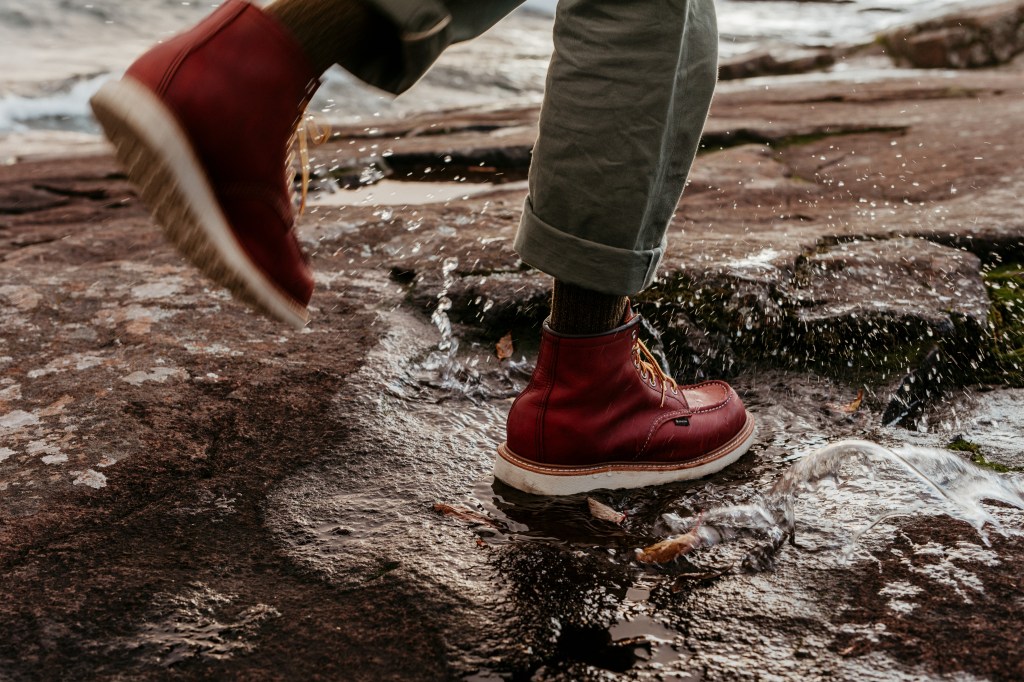 “We’ve started showing it already and we’re getting a tremendous response,” Spencer said of the Gore-Tex men’s boot, which will retail for $340. Distribution is expected to be “pretty tight,” he said, mentioning longtime partners such as Nordstrom, J. Crew and Club Monaco along with independent specialty stores in the U.S. and Canada.

Although the Gore-Tex boot is only available for men at this point, at Liberty, Red Wing will also show a wide range of Heritage product for both genders. Other additions for fall will include a Chelsea boot for men that Spencer described as “refreshed and updated,” as well as a short Hiker boot for women. The Chelsea boot will retail for $280 and the Hiker for $340.

And although it won’t be shown at Liberty, Red Wing is continuing to work with designer Todd Snyder to launch two exclusive boot models for fall, takes on Heritage’s Iron Ranger and 6-Inch Moc styles. “We’ve been working with Todd since he was at J. Crew,” Spencer said, “and he really understands the brand.” — J.E.P. 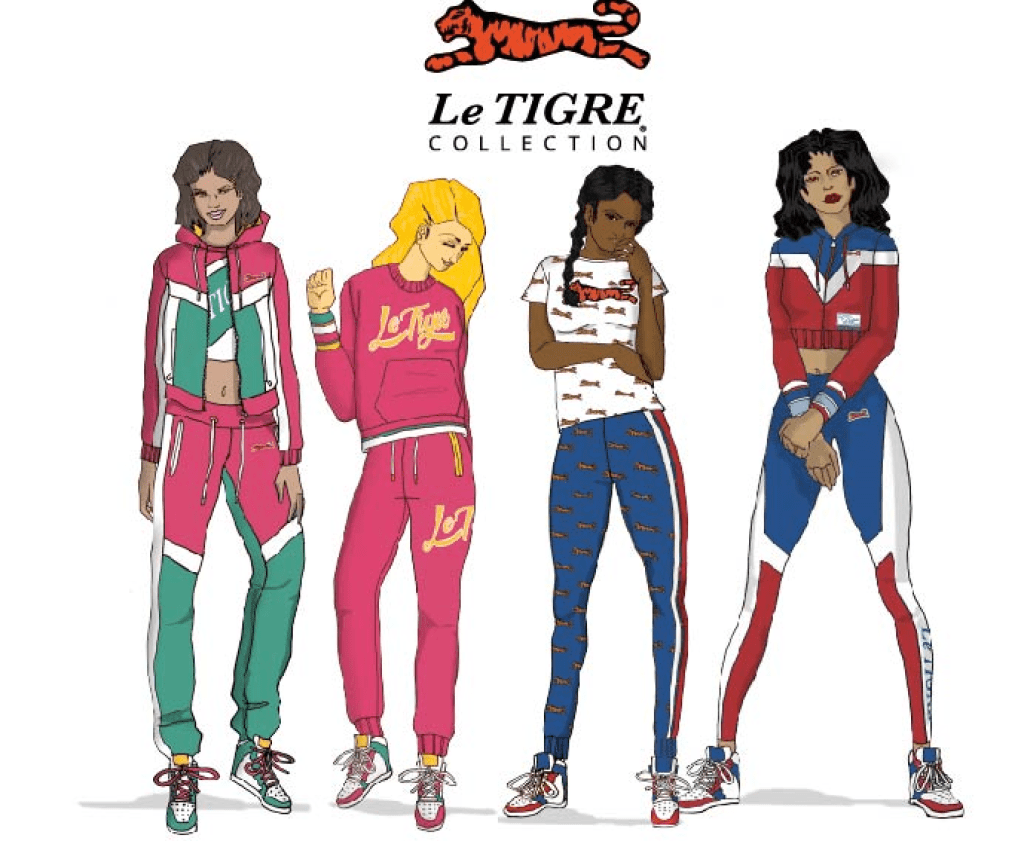 This is the first time the brand, started in 1977 and acquired in 2015 by Infinity Lifestyle Brands, is offering women’s apparel. It’s starting at the Project Womens trade show in Las Vegas with its spring and summer 2020 collections, but plans to deliver eight collections this year. Next year deliveries will grow to 10.

“The brand already has a dedicated female audience, so it made perfect sense to create a collection that is designed just for them and celebrates the brand’s unique heritage,” Ike Franco, Infinity’s chief executive officer, said. He told WWD last year that he expects the brand overall to grow to $300 million to $400 million in sales within two years.

Le Tigre already launched men’s apparel in specialty boutiques and Macy’s Inc., and it is looking to a similar route for women’s. The collection is casual, knits, T-shirts, and leggings, ranging in price under $100. There are also trendy pieces like bike shorts and polos, even some denim.

Overall, the collections are in bright colors and each piece features the heritage tiger logo the brand is known for, be it a patch, embroidery or rhinestones. The pieces are also making use of Le Tigre’s age by nodding to some streetwear looks of the Eighties (arguably its heyday) and Nineties (most of which the brand spent out of production), styles which younger consumers are still gravitating toward. 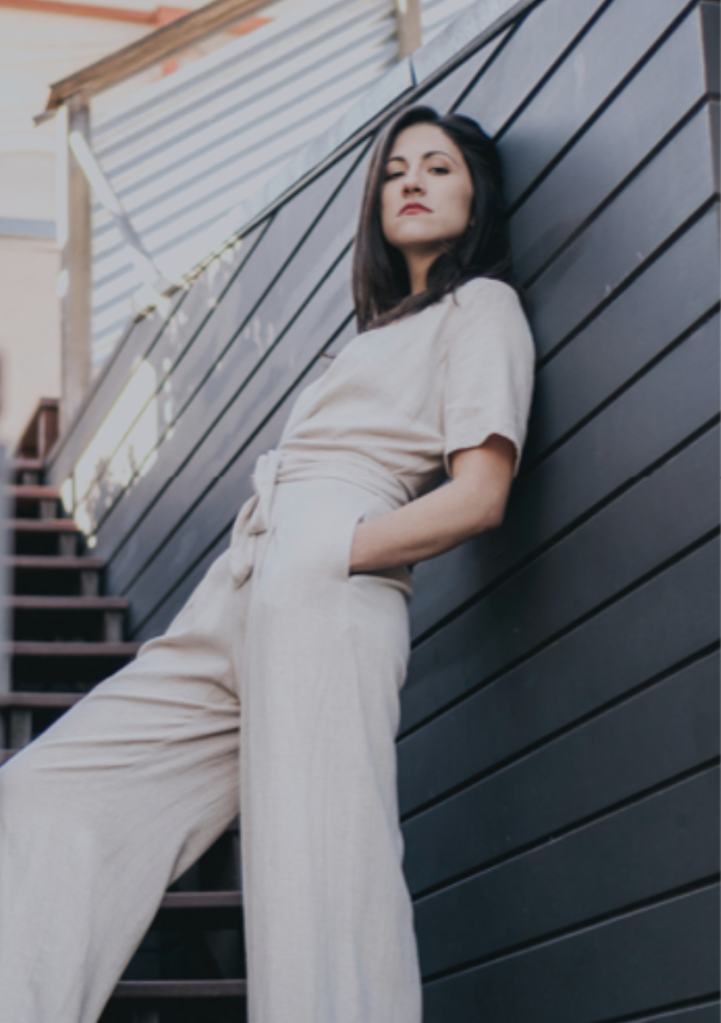 A new women’s designer is launching her first collection at Project Womens this year.

Devan Gregori will be showcasing her eponymous line with a range of 26 pieces, mainly casual separates. Think blousy button-down tops, relaxed pants and loose dresses in a few easy-to-match earthy colors with subtle embroidery and detailing. Retail prices range from $95 to $560.

A Bay Area native who studied French in college, eventually moving to Lyon to study design, Gregori said both regions influenced her designs, but nothing and no one more than her mentor Yoshi Kondo. He’s a Japanese designer based in Paris, who previously worked as a designer for Issey Miyake.

“I used tone-on-tone embroidery to give subtle texture to shift dresses, tops and jackets as well,” Gregori said. “I was inspired by the Japanese art form kintsugi, which is the art of ceramic repair using gold fill as a means to embellish a fracture. I wanted to allude to this beautiful metaphor in my clothing by using this fractured line embroidery in a subtle way.”

The collection also has a focus on sustainability, making use of fewer, natural and low-impact fabrics like a viscose-linen blend and a Tencel/cotton blend and a jacquard piece was woven in Lyon at a longtime family-owned mill. The pieces are all designed in Gregori’s base of California and then produced in a single small factory in Dalian, China.

“I aim to use as many sustainable materials as I can,” Gregori said. “So you’ll see a lot of Tencel this season as well as a luxurious viscose-linen blend that has incredible drape.”

The line so far will have two seasonal women’s collections, fall-winter and spring-summer, with two deliveries. The first is fall-winter 2020 and will be available for orders through March. Gregori is working on her spring-summer 2021 collection, which will go to market in August. — K.H.