American retailers were upbeat at this season's boutique apparel shows, which ran concurrent with Paris Fashion Week, citing flat or increased budgets and a... 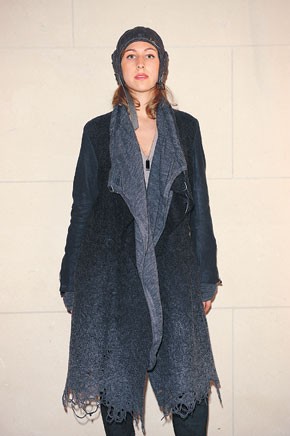 PARIS — American retailers were upbeat at this season’s boutique apparel shows, which ran concurrent with Paris Fashion Week, citing flat or increased budgets and a desire to pick up striking, iconic wardrobe items.

U.S. buyers flocked to the shows from Feb. 28 to March 3 in the hopes of finding pieces to put them ahead of the crowd and help them weather the current economic storm.

“We are focusing on offering new and different products to our customer to inspire them to pay a premium for something they cannot find elsewhere,” said Christine Lee Rosen, women’s wear fashion director at Atrium. “The retail scene is somewhat cautious, but our customer will pay for that one special item to build their wardrobe around.”

Items like the stretch leather leggings with zips, showing at Les Chiffoniers, were in high demand. The U.K. brand was at Tranoï for the first time, and visited by buyers from major American and British stores. Also popular were the brand’s sequin leggings, which wholesale for 275 euros, or $418 at current exchange, only 10 euros less than the leather version.

“We want to differentiate,” echoed Han Soyoung, owner of Han Style, a 5,400-square-foot multibrand store in Seoul. “Our budgets are up 15 percent this season.”

She was shopping for leather jackets in metallic blacks and blues, and reversible outerwear at the Isaac Sellam Experience, also at Tranoï.

Color at the shows, meanwhile, came in jewel brights such as the knitwear showing at Suzon & Lena at Paris Sur Mode, and tsesay at Rendez-Vous.

“Differentiate” was the retailer buzzword of the shows. Buyers were saving the bulk of their budgets for brands that had already proven successful. Les Chiffoniers, picked up by Atrium’s Rosen, has been worn by Kate Moss and Juliette Lewis. Similarly, New Zealand brand Nom’d sold well at Rendez-Vous.

Rosen highlighted its boy-meets-girl look as a strong trend. Bestsellers included a black trench shirt, wholesaling at 239 euros, or $363.

Tranoï’s eclectic designers pulled more numbers than last season, according to exhibitors and its organizer, Michael Hadida. More Americans, though slightly fewer Japanese, were drawn to the largest event, which presented more than 300 international designers this year over three sites at Palais de la Bourse, Avenue Montaigne and the Bourse de Commerce.

Designers relied heavily on prebooked appointments to fill their orders, while new brands had a tougher go. “It has been harder this year,” agreed Muriel Guyot, who organizes Paris Sur Mode. “But our new space at the Hotel Castiglione, which adds another 50 labels to the 100 in the Tuileries, has generated decent interest.”

U.S. designer Elaine Kim, who presented her first collection at the Castiglione site, said, “I wrote a decent business, but largely thanks to good word of mouth.”

“I’m on the hunt for anything deconstructed and feminine,” said Anna Lovyanikova, shopping for Lide Boutique, a 1,600-square-foot multibrand store in Moscow.

Show organizers tried new tactics to draw in buyers. Rendez-Vous organizer Nick Jones returned to central, upscale locations, after last year’s sites in the 10th arrondissement. Showing at the Espace Pierre Cardin and the recently refurbished Académie L’Oréal, Jones also added his first cosmetics brand to the event. Uslu Airlines, a fledgling German company, was given a prime spot at the Espace Pierre Cardin. Specializing in airbrush foundation, the brand helped maintain the quirky ambience for which Rendez-Vous is known.

Buyers at Tranoï, meanwhile, were treated to a large selection of accessories, both at the Palais de la Bourse and the Bourse de Commerce locations. Paris-based denim brand April 77 launched its April Records Label at the show, while for the second season, the Palais site featured a selection of Japanese designers. Next season, it was rumored that Hadida will showcase Indian labels.

Smallwood added that Saudi Arabia remains cushioned from economic woes. “Our market is international people. We’re in an exclusion zone of oil-based wealth,” she said.