Hip-hop and hipster royalty converged on Tuesday evening to toast the 10th anniversary of Pharrell Williams’ brand, in which Jay-Z and Iconix are partners. 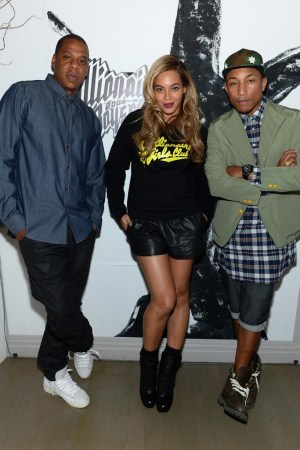 Jay-Z and Iconix are now partners with Williams in BBC and its younger, action-sports offshoot, Ice Cream. The recent marriage of Williams’ niche streetwear brand with Jay-Z’s Roc Apparel Group — which also markets Rocawear under license from Iconix — fused the former’s long-standing cult appeal with the latter’s advanced production capabilities. Add in licensing expertise from Iconix — BBC is planning a raft of new licenses in areas like footwear, accessories, fragrance and eyewear — and it adds up to a potent formula for growth.

“We don’t do those things loudly, we just do them proudly,” said Williams of his low-key approach to building his two brands, which have see-sawed in sales over the past decade. The partnership with Jay-Z and Iconix has lit a fire under those numbers.

“It’s become very successful, very quickly and volume levels have exceeded expectations for this first year,” said Prendergast. “We could double it next year, but we are holding back on the growth. We are approaching it as a slow burn over a multiyear period and we want to grow it organically. There’s been a pent-up demand for the brand but instead of doubling it each year and then seeing volume drop, we want to create a nice, healthy growth path over the next five years.”

As part of the new strategy, production has been moved from Japan into China and Pakistan, in order to lower costs. “With the cost of production in Japan and the yen having crushed the dollar, it was impossible to make money manufacturing in Japan,” said Loïc Villepontoux, who heads up special projects for Williams’ varied business ventures. “When we were making in Japan, BBC was in about 30 doors. Now we’re in well over a hundred. It’s allowed us to really grow the distribution.”

For Ice Cream, which is priced lower than BBC, part of that distribution expansion is into chain mall stores like Zumiez, which began carrying the once-exclusive label last fall, and Tilly’s, which picked up the line this spring. Today, Ice Cream is in about 500 total outlets, including karmaloop and a range of specialty stores.

BBC is distributed in about 130 stores, including Barneys New York, The Webster in Miami, Standard in Atlanta, Colette in Paris and Harrods in London.

Not everyone is pleased to see the wider, more democratic sales strategy. “What’s next, Bape at PacSun?” wrote one commenter on a discussion thread on the popular streetwear site Hypebeast, referencing the hyper-premium streetwear brand A Bathing Ape.

“It’s obvious they are just trying to get as much revenue from the brand from the mainstream audience now before the brand goes dead,” added another alienated fan of the brand.

Phillip Leeds, brand manager for BBC and Ice Cream, said the upside of the broader distribution strategy outweighed any potential backlash from die-hard aficionados. “We lost a few lovers [of the brand] but we gained a lot more other people,” said Leeds.

“The hard-core kids who were into the brand being exclusive might be disappointed. But those kids would have seen the brand go out of business if we had continued under the old model,” added Villepontoux.

The deal struck by Jay-Z, Iconix and Williams — along with his business partner Rene Garcia — was inked in May 2012. Jay-Z and Iconix, under their Scion joint venture, acquired a 50 percent interest in BBC Ice Cream LLC, owner of the Billionaire Boys Club and Ice Cream trademarks, for $3.5 million, according to Securities and Exchange Commission filings.

Scion is a brand management and licensing company founded by Jay-Z and Iconix in March 2007, with each partner owning a 50 percent stake. Iconix has agreed to contribute an additional $6.5 million to Scion to fund future investments.

“We needed more hands to expand and to get us out there. We still consider ourselves a boutique mentality. I wanted to make sure more hands could touch what we are doing, but with sensitive and strategic calculated growth,” said Williams of his decision to sell half his company.

Williams and Jay-Z have a long history of friendship and working together musically. “We’ve been friends and he was an admirer of the brand since Day One. It just made sense,” said Williams. “It’s been cool — learning how bigger companies work and what that means, all the while maintaining the authenticity of our brand.”

At their founding, BBC and Ice Cream had a short-lived license agreement for footwear and apparel with Reebok from 2003 to 2005. The deal was terminated when Williams and his team were unhappy with the quality and extent of the product Reebok produced for the brands. That led to a lawsuit against the footwear giant, which was eventually dropped.

“I’ve learned so much about what to do and what not to do when collaborating with other forces. I appreciate them for their time and the cool experiences that we had,” said Williams of BBC’s ups and downs over the past decade.

Williams and Garcia retain ownership of the BBC flagship in New York’s SoHo neighborhood and the e-commerce site at bbcicecream.com. A store in Tokyo is owned and operated by the brands’ Japanese distributor, West Inc., while a Hong Kong store is operated by I.T Ltd. Williams is currently seeking retail locations for additional stores in Miami and Los Angeles.

This past fall, BBC launched a new upscale label called Bee Line, named by Williams after Napoleon Bonaparte’s imperial symbol. The line is designed by Mark McNairy, who also designs his own label. “I look at it as BBC for grown-ups,” said McNairy, pointing to jackets and pants fashioned from vintage Woolrich fabrics, Seventies car coats and fly-fishing vests in the fall collection.

Bee Line is in 45 stores, including Saks Fifth Avenue, Bloomingdale’s and Monogram in Las Vegas.

“We both love clothes. I’m from North Carolina and Pharrell is from Virginia. He pretty much trusts me,” said McNairy, who is generally taciturn and not the most enthusiastic fan of press interviews. “He gives me initial ideas and then I run with it. The first three seasons were hunting and fishing, and then for next spring he said he wanted to do Wes Anderson in India.”

Williams explained that he was “inspired by the colors and the tones and the mixture of the West and the East” in Anderson’s 2007 film “The Darjeeling Limited.”

“I’ve basically used the brand as another platform to express myself, even if it’s something as simple as a place I’ve been or a movie I’ve seen or a conversation that sparked a curiosity. I’ve always tried to divert those things back into the brand,” said Williams.

McNairy also designs the limited-distribution BBC Black collection, which will launch this fall in about 50 stores, including Next in Cleveland, Unknown in Miami, Refresh in New Orleans, Conveyor/Fred Segal in Santa Monica, Calif., and Leaders in Chicago. With the core BBC line carried at stores like Zumiez and Tilly’s, the BBC Black label offers long-standing specialty store accounts the opportunity to carry higher-end product. The new range will offer quarterly deliveries to these top accounts. “We wanted to create something exclusive for longtime friends of the brand that needed something to differentiate their assortments,” explained Prendergast.

This fall, Roc Apparel is launching a juniors line under the Ice Cream Girl moniker, which is designed by Vashtie Kola. A full-scale women’s counterpart to BBC, called Billionaire Girls Club, is overseen by a designer named Yoon out of Japan, and set to launch next year, with a smattering of styles available now.

“I think these brands have a unique opportunity to be big and still special,” said Jameel Spencer, executive vice president of marketing at Iconix. “Pharrell has the vision for the brand in creative and design and Roc Apparel has the operating structure and back-end expertise. There’s a real sensitivity to maintaining the authenticity of the brand and what makes it special.”

Williams is hesitant to classify BBC in a strict category or style. Asked if he considers it a streetwear brand, he noted, “I would never argue with anybody if they tried to say that’s what we were. I’m just happy to exist. A label is a label. I’ve had everybody from Karl Lagerfeld to François Pinault wear BBC. We are whatever you want us to be.”