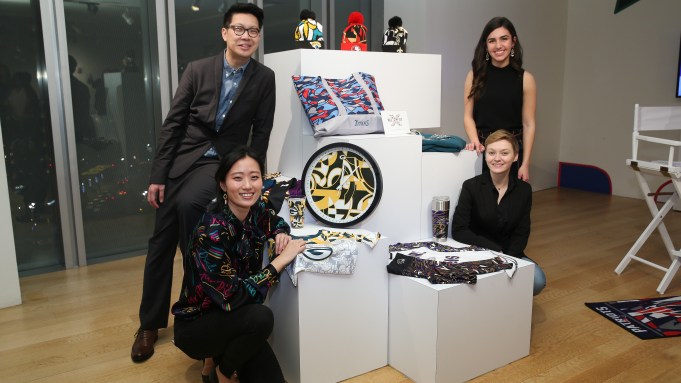 NEW YORK — A few talented students at the Fashion Institute of Technology have learned a valuable lesson about the commercial end of the business.

Their winning designs in an NFL x FIT Merchandising Design Contest have been emblazoned on a large variety of fan gear now available for sale and will also be added to the mix at Target in the spring.

Eight months ago, the NFL teamed with FIT to challenge its students to reimagine all 32 of the clubs’ logos and fan culture. The winning designs were presented to the NFL’s licensees, including Antigua, Outerstuff, New Era and G-III.

The merchandise was revealed during an event at the Museum of Arts and Design Tuesday night where Rhiannon Madden, vice president of consumer products for the National Football League, said the contest was part of the league’s push to “create robust offering for fans.” The merchandise is expected to appeal to younger fans.

“The goal of this project was to give creative freedom to FIT’s talented students to express how they would reimagine visual interpretations that represent all 32 NFL teams’ identities,” said Madden, herself an FIT alumna. “Millennials are an important audience for the NFL, and we want our products to resonate and be relatable to them — and there’s no better way to do that than by engaging FIT students to create fresh designs.”

The designs created by the team of Wing-Sze Ho, Eun Su Yoo, Arpi Dayian and Iwona Usakiewicz are on everything from hoodies and running tights to wallpaper and drink cups.

Madden said the licensees chosen to participate were those that showcased “the most compelling way to tell the story. We’re always trying to get to know our fans better and work with our licensees to innovate and stay relevant.”

During a panel discussion at the event, Madden revealed that the merchandise, which is currently available on NFLshop.com, will also be added to Target stores next year. “It’ll launch in May and will be apparel and some hard goods,” she told WWD, adding that it will be carried across the chain in all markets.

“Target has so many fashion followers so what better way to bring football and fashion together,” she said. Madden said the league will also support the launch with marketing to further promote the collection.

Designer Cynthia Rowley also attended the event and said she was “superimpressed” with the talent of the students reimagining the NFL logos and their ability to “navigate” a lengthy and complicated process from design to sales floor.

And she believes the merchandise will be successful in part because the state of fashion today.

“There’s an eccentricity in fashion today,” she said, noting that a pair of graphic NFL hoodies can be worn with a lame skirt or over a party dress.

“There are no rules anymore in fashion,” she said.

An NFL x FIT exhibit will remain open for public viewing at the Museum of Arts and Design through Nov. 30.