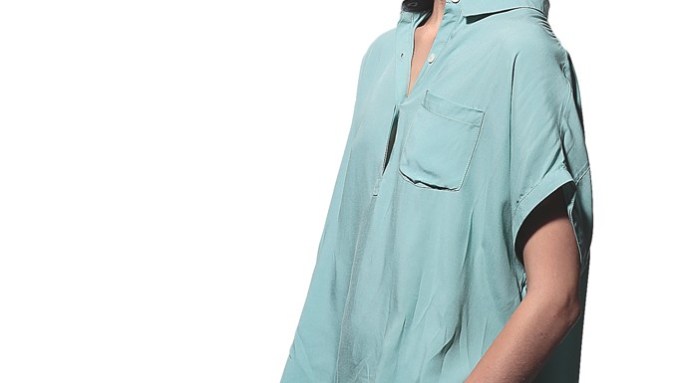 New and noteworthy brands at the Las Vegas trade shows.

Backstory: Mark Wiesmayr, a veteran of Levi’s, Sass & Bide and Ksubi, is kicking off his tenure as AG’s recently appointed design director with a revamp of the denim giant’s tops line. Besides its current customers, AG hopes to attract new ones who might have been shopping for Acne, Nudie Jeans, A.P.C., Rag & Bone or Vince. While the tops business presently accounts for less than 10 percent of the brand’s sales, Wiesmayr said the goal is to grow that share to as much as 25 percent by the end of 2014. AG’s total sales are estimated at more than $250 million.

For Spring: Working under the theme of “things that get lost in the wind,” AG’s 22-person design team for the men’s and women’s tops and bottoms divisions joined efforts for the first time to share fabrics, prints and palettes. Dandelions, feathers and bird’s nests pervade the print array and the colors suggest a softness in faded mauve, chambray blue, light gray and pale green.

Among the 100-plus styles retailing from $55 to $225 in the women’s tops business are a long-sleeve silk T-shirt contrasted with linen jersey on the sleeves and bottom band, a polka-dot chambray bomber and an ivory and tan cotton bouclé zip-up cardigan that can double as a minidress. Dresses such as a long teal silk sheath with side slits round out spring’s lineup.

“We’ve had tops before to varying degrees of success,” Wiesmayr said. “We’re working as a brand to have a voice and be an elevated collection.” — Khanh T.L. Tran

“The brand reached a point where I needed to take the next step and evolve,” Focil said. “The customer had really grown up. She’s also more sophisticated. She needed better quality garments.”

In line with the improved quality are higher prices — 15 percent higher, to be exact. Leather jackets, which represent the line’s forté, range between $629 and $752 at retail, while dresses sell from $198 to $253. With the upgrade in designs and pricing, AS by DF has opened 45 new retail doors, including more trendy boutiques like Laurie Solet in St. Louis.

For Spring: Focil steered her style compass to Brazil for body-hugging silhouettes and a tropical palette. A signature look contrasts a leather biker jacket dyed vivid blue with a white pencil skirt enhanced by coral-pink stripes. She put a new spin on leather with basket weaves, perforations and buttery suede. She also borrowed scuba fabric from the beach culture.

“It was so much fun to work [with] Neoprene,” Focil said. “It allows for some amazing structured pieces and I was able to create silhouettes that form to the body perfectly, and also exude that modern edge that the AS by DF woman is all about.” — Khanh T.L. Tran

Backstory: Baby Phat is back. In the Aughts, the urban brand made famous by its fearless leader and fabulous face Kimora Lee Simmons felt like it was everywhere. Then, it wasn’t. Baby Phat split from Simmons in 2010 and a former licensee, BP Clothing LLC, went bankrupt in 2011.

But Baby Phat is being born again under the watchful eye of Anthony L&S LLC, a long-time Baby Phat athletic footwear licensee that has formed Baby Phat Holdings Inc. and acquired the rights to the Baby Phat brand from Kellwood Co. The brand now extends across athletic and dress shoes, women’s and kids’ sportswear, intimates, eyewear and more. That’s just the start for the latest incarnation of the brand, which is aimed at midtier department stores.

“We’re taking the opportunity to introduce our vision for Baby Phat to the market very seriously. Our main goal is giving the brand the attention and dedication that it deserves,” said creative director Elif Ayden Dunlay.

For Spring: The inspiration for the spring collection comes from Baby Phat’s cat logo. Ayden Dunlay describes the Baby Phat cat as multifaceted. She can be playful, cuddly, lazy, curious and wild, but is always confident and independent. The clothes certainly aren’t timid.

The creative director pointed out that they feature metal cat logos, metal chain details, studs, rhinestones, embroideries, animal-skin prints and plenty of shine from metallic accents. The design elements are carried across swimwear, shoes and sportswear.

Key items include novelty-trimmed jeans, jumpsuits, rompers, body-conscious dresses and platform and wedge shoes. “We don’t want to define our Baby Phat customer with one specific ethnicity, budget, look or style,” Ayden Dunlay said, adding, “We want to bring that cat out of every woman, as we believe we all have one inside, and, yes, the people who knew and shopped Baby Phat when it was created will recognize the same DNA in our new styles.” — Rachel Brown

Backstory: C&C California is such a believer in the easy-breezy West Coast lifestyle that it’s branching into activewear with C&C Sport and introducing leggings as part of C&C California by Stephanie.

The two new groupings point to the path that parent company Perry Ellis International is taking for growth. While Perry Ellis doesn’t disclose revenues for C&C, it said sales for its women’s sportswear business, which includes C&C, Laundry by Shelli Segal and Rafaella, fell 9.3 percent to $149.1 million in its fiscal year ended Feb. 2 from a year ago. Cynthia Erland, vice president of marketing for the company’s contemporary brands, said C&C Sport and C&C California by Stephanie are projected to make up 25 percent of sales for the C&C brand.

For Spring: Tapping into the burgeoning activewear market, C&C Sport melds function with fun and femininity for women who like to run, train and do yoga. Vapor images, photorealism and butterflies tinted bright colors elevate the look of color-blocked running tights, racer-back bras and fleece pullovers with oversize hoods.

All made in California, the activewear retails from $50 to $130. C&C California by Stephanie is designed by Stephanie Feldenkreis, the daughter of the company’s chairman. In tribute to her hometown of Miami, Feldenkreis infused her leggings with vibrant hues such as flamingo pink, in addition to images of palm trees and snake prints. She also introduced flirty scoopneck dresses.

Backstory: After learning how to sew at the age of three, Vietnamese-born Christine Alcalay shadowed her mother in garment factories throughout New York. She studied at New York’s High School for Fashion Industries and then Parsons The New School for Design, where she began interning for Christian Lacroix. In fall 2011, she launched her namesake line, whose annual sales now total more than $100,000. Besides her own boutique called Kiwi, located in Brooklyn’s Park Slope neighborhood, her line is sold in specialty stores including Mahna Mahna in Tokyo; The Store in Jeddah, Saudi Arabia, and Angela’s in Rye, N.Y.

For Spring: “Wild as the Wind,” a love song by Nina Simone, inspired the spring collection infused with French lace that’s mixed with silk and cotton. Alcalay also drew wildflowers that were translated into a black and white print, as well as a watercolor version. Standout pieces include a cotton tank with pleated detail under the bust and a silk georgette layering shell, both retailing for $209.

The line tops out at $3,200 retail for a silk gown enhanced by a lace collar, drop waist and pleated chiffon layered skirt.

“I’ve always had imagery while listening to [Simone’s] song,” she said. “I imagine soft prints, sheer fabrics, light silks [and] playful cottons in billowy shapes that echo the way the wind blows against a body.” — Tyler Everhart

Backstory: Childhood friends Emily Faulstich and Kimberley Gordon started Wildfox Couture as a contemporary knit brand in 2007. Since its inception, the Los Angeles-based company has extended into jewelry, intimates, swimwear and a shoe collaboration with Jeffrey Campbell. It is now launching denim under the creative direction of Michelle Siwy, who left her namesake jeans brand this year after a financial disagreement with the owners of Siwy.

Wildfox Denim retails between $186 and $258 at retailers including Neiman Marcus, Selfridges, Harvey Nichols and Nordstrom, as well as specialty stores like E Street Denim and Planet Blue. “I have always admired Michelle’s design process,” said Wildfox Couture chief executive officer Jimmy Sommers. “Without question, I looked to her immediately when it was time to launch our bottoms program.”

For Spring: Siwy drew inspiration from the breezy simplicity of island life, the key theme at work being “shipwrecked.” The collection features denim that is, in her words, “beaten, tattered, ripped and torn as if [it] had traveled around the world.”

There are 14 styles of shorts, including a pair in pastel pink with white seams and tiny white pom-poms bordering the hem. Signature pieces include a lightly washed denim jumpsuit with a gold zipper running down the chest and pastel tie-dyed skinny jeans. She also evoked her favorite fashion era, the late Seventies.

“The cuts of the dresses, the way halter tops fit, the glamour of it all speaks to me,” she said. “There is a nostalgic vibe in everything I design.” — Ariel Sayre

Backstory: After decades in the garment industry, Moshe Tsabag, who sold $100 million junior brand Hot Kiss to Bluestar Alliance in 2008 for an estimated $20 million, knows a thing or two about making clothing. Today, he believes a successful apparel brand has to be based upon bringing fresh fashion to customers as quickly as possible.

That’s where WyldeHart comes in. “I’m in the fast-fashion world and trying to be first to market,” explained Tsabag. Associated with design studios in Los Angeles, London and New York, WyldeHart aims to offer styles that capture trends emerging across the globe. The brand will introduce new merchandise every month. “You can’t have a brand sitting on the shelf for too long,” said Tsabag.

For Spring: WyldeHart dabbled in a few items for holiday but is launching in earnest for spring. Kimono pieces and printed bottoms have been working well so far, and will remain in the line. Embroidered tops, sweatshirts with fringe, wide-leg pants, color-blocked rompers and tie-dyed tank tops are also in the spring assortment.

“Ninety-nine percent of all our product in the sportswear area is casual and denim-friendly,” said Tsabag. He is targeting retailers such as Von Maur, Nordstrom, Macy’s, Hudson’s Bay, Urban Outfitters and The Buckle with WyldeHart. The brand’s retail prices range primarily from $20 to $60, and it is aimed at 15- to 25-year-old shoppers. Befitting its name, Tsabag described the core WyldeHart customer as a free spirit who “has her own mind and her own look, and she’s not concerned necessarily with what’s going on elsewhere. She wants to be special.” — Rachel Brown