Ones to Watch in Las Vegas

Six brands to look for at the trade shows. 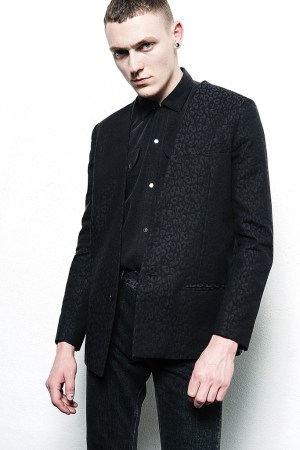 Six brands to look for at the trade shows.

Contemporary men’s wear is its DNA, but Paris-based April77 is crossing into women’s fashion, infusing it with attitude borrowed from a little rebellion, youth culture and the arts scene.

Already selling at Oak in New York, April77 aims to grow across the Atlantic and will court contemporary boutiques and upmarket stores at The Tents@Project (Booth 266).

“The U.S. market is a new territory for us,” said Brice Partouche, owner, founder and artistic director of April77, which references his birth date. “We’re usually not trade show fanatics; however, we [were] seduced by the edgy selection from Tents. We know that we will meet the best buyers.”

In its second visit to The Tents@Project, the 12-year-old line will showcase about 70 mostly unisex styles for fall, crafted from Italian and Japanese fabrics in a primarily black palette, along with jeans, designed in slim, skinny and high-waisted styles — some with guitar-pick pockets.

Fabrics and textures are the focus of the line, guided by the ethics and heritage of Partouche, who is a vegetarian and excludes leather and fur from his collection. Denim blue is in his blood, thanks to his dad, Armand, and uncle, Bernard, who ran the French denim brand Bonaventure more than 30 years ago.

Key pieces for the season are embroidered cupro Teddy jackets, vegan leather biker jackets, indie-rock-style blazers and silver lamé shirts. Wholesale prices range from about $68 for denim to $272 for coats.

The collection channels fashion inspiration from the music scene in the U.K. during the Eighties, like The Smiths, The Jesus and Mary Chain, and Spacemen 3, which Partouche refers to as a “Sixties psychedelic revival.”

Music is a vehicle for the brand’s marketing as well. April77 is collaborating with Atlanta rock band Black Lips, releasing a limited-edition box set in March on its Web site and in its two Paris stores. The set features a biker vest designed with the band, along with a flexi disc featuring the single “Nightmare Field.” Only 100 of the 500 units will come with a vest.

The zip code 90011, generally know as South Los Angeles or South Central, might not be the obvious choice of location for the headquarters of an apparel company. But Rosario founders Mario De La Torre and Jorge Nuño hope to change that.

In an area that has its share of crime and poverty, the duo’s business venture is a return to their roots, a place where they grew up.

The contemporary line represents De La Torre’s first passion — clothes — and motivation for him to walk away from a six-figure salary as a loan officer. Bit by the fashion bug as a child, he would shop stores like Robinsons-May with his mom and pick out clothes for her, whether she’d buy them or not, captivated by their quality and elegance.

“Clothes aren’t made like they used to be,” said De La Torre, creative director, “so I’m trying to create classic, timeless clothes that can be staples and heirlooms, like the ones my mom would hand down to my sister.”

For fall, maxidresses, shifts, coats and capes are rolling out in earth tones like olive, burnt orange, burgundy and mustard. Wholesale prices range from about $40 for blouses to $60 for shorts, and $150 for dresses to $300 for capes. First-year sales projections are $500,000.

With help from Nuño’s connections as head of an advertising agency, Rosario is weaving itself into the fabric of the local scene. De La Torre dressed Los Angeles City Councilman Curren Price’s wife, Del Richardson Price, in an electric-blue peplum dress for his inauguration last year. Plans also include dressing Mekhi Phifer’s wife, Reshelet Barnes, for the premiere of Phifer’s upcoming movie, “Divergent.”

Ruhi owner Silke Labson is trying to upend the fashion cycle. Instead of delivering collections by season, Labson plans to create capsules with her new line when the whim strikes, utilizing her platform of local sourcing and insider connections, for of-the-moment collaborations.

“We’re keeping it loose with more options, gathering other brands and artists and working with them on amazing projects,” said Labson, whose past experience includes retail management with Betsey Johnson and Marc Jacobs. She explained how her unconventional model would appeal to retailers. “I don’t have the limitations of China. Producing in L.A. gives me more freedom to see a trend and quickly turn it around.”

In its first season, Ruhi will offer about 20 pieces, targeting men and women ages 16 to 22 with street-style clothes such as wavy cropped cotton tops, high-waisted cuffed leggings, a swingy miniskirt, ribbed tanks with graphics, and a blousy sweater with snake holograms on the sleeve. Wholesale prices range from $13.50 for tops to $30 for leggings to $75 for jackets.

She is showing at Agenda (Booth A4), where she’ll also bring BMX-inspired pieces, like sublimated photo T-shirts in partnership with Jon Lynn, a designer at Marc by Marc Jacobs, along with all-over floral-print matching tank-and-shorts sets in collaboration with model Bradley Soileau.

The line is a departure from Shown to Scale, Labson’s first venture with a partner, which she began in New York and involved producing overseas. But it proved to be a mammoth task to manage and control from halfway around the world. The DIY adventure, where Labson learned on the fly about patternmaking, served as on-the-job training for the designer, who is a photographer as well.

“[With Ruhi], I’m starting fresh in L.A. and keeping everything where I can see it and handle it,” Labson said.

NEXT: Violeta by Mango >>

Barcelona-based clothing brand Mango has just launched a line called Violeta by Mango that aims to dress a younger target customer in sizes up to 22, with the tag line “I love it and it fits.”

The 400-piece range of on-trend product comprises clothing and accessories for any moment of the day. Violeta by Mango will make its U.S. market debut at WWDMAGIC, Booth 75500.

The various groups take inspiration from the Marais district of Paris, Mediterranean summers, the island of Santorini, and safari style, with colorblocking, animal prints, stripes, florals and men’s wear touches.

At the show, the company built a 2,000-square-foot replica of a store representing all its lines — Mango, Mango Kids and Violeta by Mango. The launch coincides with the brand’s spring ad campaign unveiled last month.

Besides new areas using natural materials that have been built into existing Mango stores, the first dedicated Violeta store opened in Madrid on Feb. 10. Expansion plans call for Violeta stores in Mango’s seven largest markets: France, Germany, Italy, The Netherlands, Turkey, Russia and Spain, with 50 stores projected to open by the middle of this year and another 50 by year’s end. The collection will also be available at online stores in Europe, Turkey and Russia.

Sorting garment-dyed shirts at a Vernon, Calif., warehouse that also houses a sewing facility and design studio, Gene Montesano is once again on fashion’s front lines with the revived brand Ever. He is standing near the charging Tesla electric car he drives down from his home in Santa Barbara four times a week when he spots his partner, Barry Perlman, slipping on a hunter-style vest to test the fit and feel.

The duo, founders of Lucky Brand, Bongo and other pillars of the denim industry over a 40-year career, is resuscitating Ever from a three-year hiatus that was instigated by a bankruptcy filing.

Once silent partners in Ever, they decided to bring it back last September and recruited Joe Krafka, who conceived and launched the label in 2004 and ran it for the first three years.

“We’re taking the bullets,” Montesano said, adding that the bankruptcy claims have all been cleared. “We want to be involved so we can keep an eye on it, from an aesthetic point of view and a financial point of view.”

With the return of Ever, which is showing at Liberty Fairs (Booth 653) at the Sands Expo center at the Venetian/Palazzo, Montesano and Perlman are again pulling off a hat trick in fashion. They also own Jean Shop, which espouses authenticity for denim connoisseurs, and Civilianaire, which proffers a utilitarian wardrobe all made in Los Angeles. Ever is rooted in the California lifestyle that grooves on comfort and casualness.

Differentiating the trio of brands is “crystal clear,” said Perlman, who can envision the same customer sporting all three.

“To me, it’s always the psychographic, not a demographic,” Montesano said.

To appeal to customers old and new, Krafka revamped Ever’s past bestsellers in better fabrics and trims while maintaining a neutral palette. Riri zippers seal the coin pockets on women’s skinny jeans that have been dipped in resin indigo or bleached and overdyed. A snap shirt is malleable in feather leather. A leather biker jacket from the brand’s last incarnation is recast with a hood and lined in heather-gray jersey.

The five-leaf logo is affixed as a patch on sleeves.

The fall collection of 50 pieces for men and women adds to the smaller spring collection that is being carried by Revolve.com, E Street Denim and other specialty retailers. Said Krafka, “It’s evolving.”

Coupled with a new private equity partner, Cynthia Vincent is on a path to growing her 11-year-old contemporary business, and ENK Vegas is a requisite stop.

For the first time in at least four years, Vincent is exhibiting the apparel portion of her Los Angeles-based brand, Twelfth Street by Cynthia Vincent, in Las Vegas (ENK is at the Mandalay Bay Convention Center; Vincent is in booth 18101). Emphasizing what she dubs “work-to-date” attire along with versatile styling and accessible retail prices running from $110 to $495, the designer said she hopes to reach more international customers at the trade fair.

Perhaps nothing transcends cultural and linguistic barriers more than flattering fashion. Dressing her customer in a more ladylike and refined manner, Vincent characterized her fall collection as tribal romance, melding a tribal print with a Renaissance landscape. A fan of the Seventies, she’s also offering maxidresses that are modernized with slits and plunging necklines.

“Some of my best-selling pieces are the most expensive, or they are competitive [in pricing],” she said. “It’s got to be really special, [has to give] a reason to buy, and price is not an issue. Or there has to be a perceived value to it.”

This is the beginning of what Vincent hopes will be a growth spurt for the firm, which logs more than $10 million in sales annually. Not only did she recently join the Council of Fashion Designers of America, but last November she also received a majority investment from Los Angeles’ Gores Group, which holds stakes in J.Mendel and Mexx. The new associations should help her weather the challenges in the contemporary arena.

“Our job as a designer has gotten more challenging with the H&Ms and Zaras of the world,” Vincent said. “It’s about having a different point of view and offering something that can last from season to season.”