Ones to Watch at WWDMAGIC 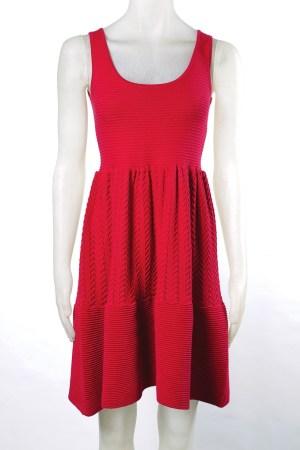 Saul Mimran is taking the expertise he honed as co-founder of Club Monaco to a new venture called Moon Apparel.

After launching Club Monaco in 1985 with his younger brother, Joseph, and selling the retailer of minimalist chic to Polo Ralph Lauren Corp. 14 years later, the Toronto-based apparel executive is still keeping it in the family. He’s now partnering with his son, Jordin, and daughter, Tamara, both in their 20s, to create fashionable basics at accessible prices.

“The line really talks to modern, young women who are starting their careers and looking for great modern sportswear that they can count on to take them to work [and] to play,” said Jordin Mimran, Moon’s creative director.

Premiering in WWDMAGIC’s White section, Moon’s fall collection includes cropped pants, blouses and sweater dresses in a wide range of fabrics, like cotton lace, polyester georgette and double crepe in polyester and spandex. Its clean, simple lines are infused with bright hues of plum and cherry. Wholesale prices run from $35 to $85.

In Canada, Saul Mimran already counts the support of the Bay, which approached him to create an apparel line exclusively for the retailer two years ago. Hanging next to Rachel Rachel Roy, INC International Concepts and Esprit, Moon is now carried in more than 90 locations of the Bay across Canada. In the U.S., “We hope to reach specialty stores that offer modern apparel,” he said.

Tamara Mimran, the brand’s merchandise director, added that Moon is finessing what worked in the Canadian market for the U.S. “Customers are really looking for something exciting, either a new print [or] new fun embellishment,” she said. “They’re also looking for easy dressing.”

After years of adapting red carpet gowns for the masses, Allen Schwartz is now on a mission to ignite new trends in contemporary sportswear.

With Blue Pearl by Allen Schwartz, the creative director is turning out theme-based trends, whether it’s the Southwest, with Navajo-inspired embroidered denim, or the Chelsea Girl, with plaid shirtdresses.

“The contemporary sportswear market has been socked with basics and suiting,” said Schwartz, who also owns dress specialist ABS by Allen Schwartz. “That’s not what contemporary should be. It should be what’s trending now.”

Among the pieces that Schwartz will show for Blue Pearl are a cutaway jacket in Italian crepe, sateen pants with tuxedo stripes, a boyfriend blazer with polka-dot lining and a leather jacket with metal tips on the collar. Denim makes up a third of the line, although Schwartz guarantees that he won’t offer basic five-pocket jeans.

After all, his ideal customer is a woman age 28 and up, who shops two to three times a week in search of newness but is deterred by designer labels’ high prices. Blue Pearl wholesales from $69 to $179.

Blue Pearl did an early test last fall, when it shipped a fur jacket to Barneys New York. Launching a full collection for the pre-fall season in WWDMAGIC’s White section, it is now eyeing specialty stores, as well as international buyers and distributors, to reach a first-year sales goal of $6 million to $8 million.

“The biggest challenge, more than anything, is fresh product,” Schwartz said. “If [stores are] not open to buying new product, the consumer is not going to buy from them.”