Outdoor Apparel Gets a Colorful, Playful Twist in Tokyo

Japanese are dressing as if they're heading to the nearest mountain. 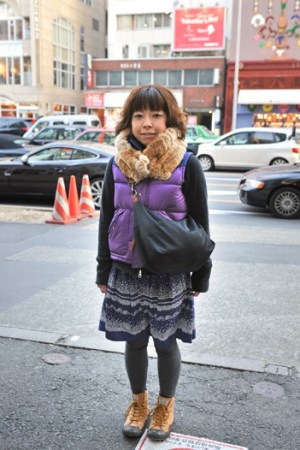 Tokyo is one of the world’s largest urban landscapes but these days many of its trendy citizens are dressing as if they’re heading to the nearest mountain, kitted out in a colorful mix of high-tech jackets, hiking boots and trekking packs.

On any given day, it’s possible to find both men and women layering colorful or patterned tights under shorts or sporty skirts. The look has become so popular with women that it has even spurred a new fashion term: “yama girl” or “mountain girl.” And while some enthusiasts are actually putting the gear to use and heading out of the city, others are just wearing the items around town.

As with any popular activity here, it’s important to look good while doing it, according to Brian Salsberg, a principal at McKinsey & Co.’s Tokyo office.

“One of the more unique qualities of the Japanese consumer is the degree to which they are focused on occasion-specific apparel, in particular for individual sports like golf, skiing and running,” Salsberg said. “Simply put, ‘how you perform’ is often secondary to ‘how you look performing.’”

Young Japanese are increasingly interested in communing with nature.

“Up to probably five or six years ago, hiking or trekking was booming among older people 60 years old or more,” Hikari Mori, general manager of The North Face business department of Goldwin Inc. “Nowadays more and more people are starting to go to the mountains, so we are very happy to [cater] to a younger customer. So definitely the market’s changed.”

Although many of Japan’s biggest outdoor brands hail from other countries, those companies are designing products especially for the Japanese market, incorporating bolder colors and patterns than those found in Western countries.

A Tokyo-based team of creative designs about 94 percent of the apparel The North Face sells in Japan. Similarly, Aigle Japan designs all of its apparel for the local market and Columbia Japan creates about half of its items as exclusives for Japan and imports the rest from the international product lineup.

Outdoor music festivals, such as Fuji Rock, have also helped shape the market, according to those in the industry. Visitors to these festivals dress in an almost hippielike mix of bright colors, prints and tie-dye, and that style has slowly been working its way into the cities.

With the prevalence of serious outdoor clothing — as well as cheaper knockoffs — on the streets of Tokyo, one wonders whether or not those who follow this trend have actually ever been to a mountain.

Katsuhiko Makino, director of the marketing division of Columbia Sportswear Japan, said that for women, roughly 70 to 80 percent of customers purchase outdoorwear with the intent of actually wearing it in the wilderness, whereas for men this number is more like 50 percent. He said that Columbia’s sales in Japan increased between 7 and 8 percent between 2009 and 2010, and he expects about the same growth again this year.

Aigle, on the other hand, is a brand that has always focused more on wearable, outdoor-inspired clothing rather than actual performance wear. Yoshihito Miki, a merchandiser for Aigle Japan, notes that women currently make up about 70 percent of the brand’s customers, and he expects this to continue to increase in the coming years. He said more than 60 percent of customers buy Aigle clothing for use in the city rather than in the mountains.

“What’s most popular is a mix of casual and outdoor apparel. It’s not suited for serious trekking, but it’s fine for maybe one night near a mountain,” Miki said.