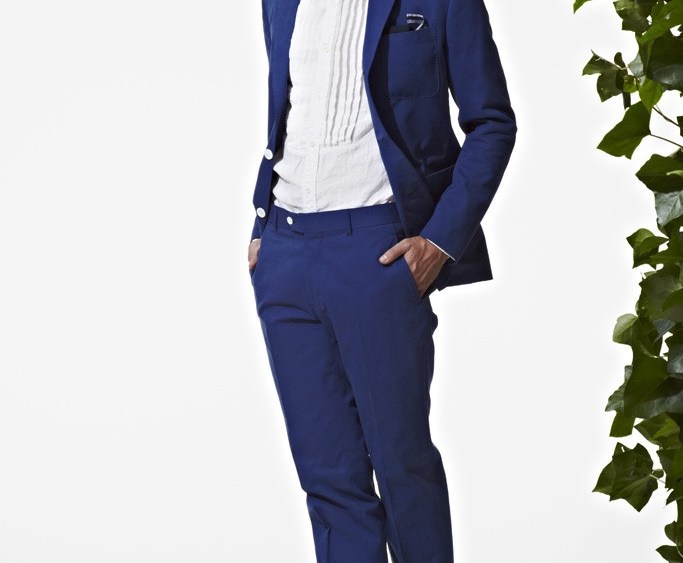 It now has a name and an aggressive marketing plan.

J. Press York Street is the moniker for the new collection designed by Ariel and Shimon Ovadia of Ovadia & Sons for the venerable Ivy League specialty store. The collection, which will be previewed next week for a spring launch, consists of a few-hundred pieces ranging from swim trunks and tank tops to accessories and suits.

“My brother and I designed it,” said Shimon Ovadia. “And it came together quickly. It’s a total lifestyle brand. We didn’t do footwear, but we did everything else.”

As reported, the Ovadia twins were tapped by J. Press to serve as creative directors of a new line of men’s wear, a line that is also being wholesaled to other select stores, including Fred Segal, according to Ovadia.

It will be carried in the four J. Press stores — Manhattan, New Haven, Conn., Cambridge, Mass. and Washington, D.C. — and Ovadia said a freestanding store for the line will open in the spring in New York City. “When the owners of the company saw the line, they decided to add it to their existing stores,” Ovadia said. “They won’t carry the entire collection, but will mix pieces [into their existing assortment.] And then they’re going to open a stand-alone shop in the spring,” he said, although the location has not been determined.

Yuki Okita, president and chief executive officer of J. Press, said distribution will be expanded outside the U.S. starting next year.

“We are planning to distribute J. Press York Street in Japan and Asia from next fall, with the U.K. to follow shortly thereafter,” he said.

He said the company “put much thought and consideration into partnering with Ariel and Shimon as creative directors for the new J. Press York Street range. Ultimately, we wanted to work with them because they weren’t interested in trying to change the core of what J. Press is and what it stands for. Ariel and Shimon understood that the brand is not a borrowed heritage, that J. Press has a real provenance, and they respected that. Another positive aspect is the fact that they are young, but still they understand and respect the DNA of this storied American clothier. For them, J. Press’ heritage will always be at the core of everything we do in the future, and they were fascinated by the idea of infusing new into old.”

Ovadia likened working with J. Press to finding a “sunken ship with treasure” that he and his brother can now revive. Ariel Ovadia said, “We had a vision of bringing the brand up to date with great fresh clothing while still keeping with the company’s rich history and traditions, and we believe that the spring 2013 collection of York Street has accomplished just that.”

Among the pieces are sack suits in an updated silhouette for $495 to $750; a modern raincoat in a double-faced water-resistant British Millerain fabric; woven shirts in 80s two-ply cottons for $98 to $130; ties, socks and scarves in Ivy League colors, and grosgrain belts.

The name of the collection is derived from the location of the first store opened by Jacobi Press on Yale’s campus in 1902, on 262 York Street.

“This year marks J. Press’ 110th year in business, and we are very excited to introduce a modern evolution of our heritage with the J. Press York Street collection.” Okita said. Onward Kashiyama bought the business in 1986.

In addition to the J. Press collection, the Ovadia brothers have created a new line for Barneys New York under the label Ovadia & Sons New York. Shimon Ovadia said the line is designed to appeal to a “more advanced customer” and features “more elevated fabrics, bodies and design details.” A wool bomber jacket with a fur collar, sport coats, wool flannel shooting vests, dress shirts, sport shirts and ties are among the pieces created for the retailer. “It’s its own little world,” Shimon Ovadia said. The collection is being offered for the fall season.

The Ovadias grew up working in the family’s children’s wear business, Magic Kids Inc., a $10 million distribution company that specializes in closeouts, and launched their vintage-inspired men’s collection in 2010. The brand offers a modern interpretation of American and English classics, and it was recently named one of GQ’s Best New Menswear Designers in America.