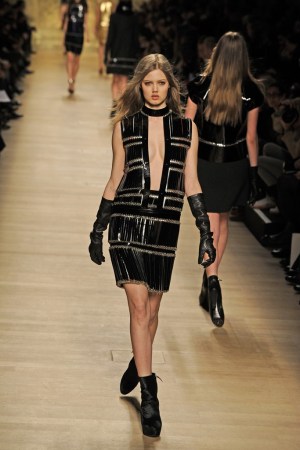 PARIS — Fashion has another designer vacancy. The House of Paco Rabanne and Manish Arora, who was tapped last year to revive the brand’s fashion business as creative director for women’s wear, said they have parted ways by mutual agreement after two seasons of collaboration.

“We are most grateful to Manish for the work accomplished and the energy that he displayed all along this project. The strong media impact of the past two seasons has enabled Paco Rabanne to partake with strength in the universe of contemporary fashion,” stated the company, owned by Barcelona-based Puig.

A successor has yet to be named.

The news comes two months after the Paris presentation of Arora’s second collection for Paco Rabanne, which was wearable in its allure and garnered positive reviews.

Tasked with updating the namesake founder’s futuristic vision, Arora got off to a bumpy start when his debut effort, a brash sci-fi flavored affair, received mixed reviews, with some comparing it to the work of iconic Eighties designer Thierry Mugler. Strong-shouldered metallic and sequined dresses in curvaceous shapes were topped with flying-saucer hats by Philip Treacy.

The line seemed out of sync with the vision for the brand of Rabanne’s vice president, Vincent Thilloy. In an interview with WWD prior to the presentation of the first collection, Thilloy used the terms glamour and wearability to sum up management’s brief for the brand’s reincarnation under the maverick Indian designer.

The collection, Thilloy said, was meant to be an “elastic” ready-to-wear lineup featuring couture elements, with a sliding price scale to match. “Everything featured on the runway will be for sale,” he said.

While the reaction from retailers to Arora’s debut collection for the house proved lukewarm, the collection nonetheless attracted a lot of media attention when Lady Gaga donned several of the more ostentatious looks (including a selection of the line’s wacky metallic paper dresses with giant discs resembling giant crinkled cupcake wrappers) at the 2011 MTV Europe Music Awards, held in Belfast.

The spring collection was picked up by around 30 doors, growing to around 50 points of sale for the brand’s fall 2012 collection.

“Revisiting the Paco Rabanne fashion was a very enriching experience and an exceptional artistic and human adventure. I am, today, happy to have accomplished the mission I was trusted with in order to cast this iconic brand back into the spotlight,” said Arora, who has his own fashion label.