The designer has created a direct-to-consumer brand called Paskho for high-tech travel clothes for men and women.

After more than 25 years in the fashion business, Patrick Robinson was frustrated with a lot of what he saw: lots of waste, lots of unnecessary pieces, lots of corporate mumbo-jumbo.

So the designer, who has worked for such bold-faced brands as Giorgio Armani, Anne Klein, Perry Ellis and Gap and also had his own eponymous collection, decided it was time to take a step back. 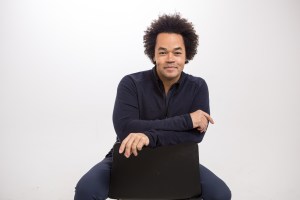 He hired a guide and spent 18 days backpacking in the wilderness. It was during that solitary time of reflection that Robinson experienced a reawakening and decided on his next career move.

The initial idea for the brand was to embrace the “values and virtues” he’d developed growing up in Southern California. He was doing his best to live a clean life: eating well, growing his own vegetables and cultivating chickens and bees. But seeing the waste that was being generated in his last corporate position at Gap, he thought there had to be a better way.

“I saw that there was an opportunity to build a brand that was sustainable and socially responsible,” he said. “In our society, we use a lot of stuff that does little for us.”

While on his backpacking trip, he realized that he needed only a pair of pants, shorts, a T-shirt and socks. So he thought: “Wouldn’t it be cool to have an urban brand that you use to light backpack? That’s the spark that got me going.”

He set up shop in his basement, spent his own money and got to work. He sought out reclaimed fabrics, which still represent 40 percent of sales, and zeroed in on performance products. He found a manufacturing facility in Asia, KTC (Knowledge Technology Craft), that specialized in high-tech production for brands such as Rapha, Bogner and Adidas.

Robinson’s first foray was to create pants and T-shirts that could be worn for work and play and sell them directly to consumers. He tested the concept on Kickstarter in 2015, but then stopped to regroup before launching in earnest in 2017. What he soon found out is that his customers believed the products were best suited for travel. “It’s like what happened with Lululemon: they started in yoga but then figured out their clothes worked in other parts of their customers’ lives.”

He said no one needs any more clothes, but they do gravitate toward products that solve a problem. And for Paskho’s customers, it’s the discomfort of traveling on airplanes and the desire to not only feel good during the flight but also look pulled together when they get off.

Sales have grown exponentially. In 2018, he said, they were up 340 percent, and this year, they’re up another 260 percent. “We’ve been told we’re growing like a tech company,” he said.

Today, Robinson said 40 percent of Paskho’s customers buy from the brand between four and seven times a year. The line is 60 percent women’s wear and 40 percent men’s.

More than 80 percent of sales still come from pants and most customers will buy two pairs. The men’s pants retail from $98 for a nylon moisture-wicking style to $168 for a cropped, single-pleat trouser in a four-way stretch water-, oil- and dirt-repellent fabric. The women’s offering has a similar price point and fabric content in styles that range from wide legs to banded cuffs. 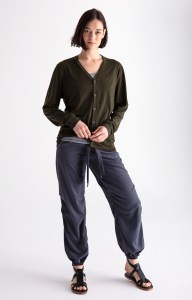 Paskho now has offices in both Hudson, N.Y., and SoHo, and there’s a 20,000-square-foot distribution center in upstate New York.

At the end of 2018, he had raised $1.8 million in seed money from friends and family, and is halfway through an $8 million fund-raising round from family as well as private equity investors who are interested in supporting brands that are sustainable and socially conscious.

Sustainability is still a major message of Paskho. It uses only Bluesign-approved textiles, which have been certified to eliminate harmful chemicals, use less water and do not pollute the air or soil. The company also donates 1 percent of its sales to environmental causes. It has partnered with KTC to ensure the laborers who make its clothes are treated fairly and paid equitably. It ships its products in recycled paper envelopes.

Looking ahead, Robinson is hoping to add a few other products, notably underwear, which he expects to launch in the second quarter of next year. He’s also working to create a shoe from post-consumer waste.

But what he won’t create is a collection. Robinson bristled: “Collections are a waste of time. Our problem as a society is that we create a lot of what people don’t need and things we’re not good at. Americans in particular just want to be comfortable and we’re just looking to grow by making your life better.”