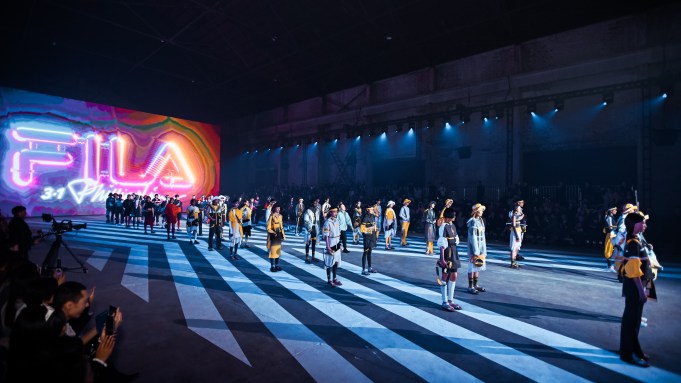 SHANGHAI — Fans of the Phillip Lim and Fila crossover collections are in luck: The American designer is set to create at least two more collections with the sports label over the course of the coming year, extending what was originally a two-year deal.

The designer shared the plans for a continuation of the partnership just after presenting his third collection with Fila. In another sign of deepening commitment, it was also the first time the collection was presented through a runway show format, which was streamed live online from the Minsheng Art Wharf in Shanghai.

“I think any type of relationship you get to know each other and there’s a honeymoon period,” Lim said. “It’s like dance partners and now we have a rhythm going on.”

The theme was “off court” — or clothes that blur the line between the court to city streets. Comprised of 56 looks, the show opened with sunny shades of yellow while a joyful tie-dye motif ran throughout the collection, although it was color blocked and paired with striped patterns to give it a more athletic look.

“We tried to weave in Fila’s heritage but also what we do,” Lim said. “The trenchcoat that opened the show was important to us [at 3.1 Phillip Lim], but we anchored the ending in the red, white and blue, [which are Fila’s signature colors].”

Thus far the collaborations have only been available in the Chinese market — the products are available the same day it presents in both Fila stores and Phillip Lim boutiques — but the designer said he hoped it could be offered to an international audience soon.

Fila is a star performer among Anta Sports’ portfolio, a company which has owned and operated the Fila business in China since 2009. Although Anta is largely unknown in the West, it is China’s largest sportswear company, and ranks in prestige only after Nike and Adidas. Earlier this year, Anta Sports boosted its reach into specialty outdoor and snow apparel by purchasing Amer Sports, which includes brands like Arcteryx and Salomon, for 4.6 billion euros.

Fila, in particular, has recorded gangbusters growth as the appetite among China’s middle class for a healthier lifestyle catches on. While the focus at Anta, the group’s namesake label, is on pure sports performance, with the brand acting as the official outfitter to many of the Chinese national sports teams, Fila has won over consumers for its trendy and fashionable offerings.

Year-over-year, the brand’s profits soared by 80.9 percent for the six months ended June 30, helping Anta Sports to grow interim profit on a group-level by 58.4 percent from a year ago period to 4.25 billion renminbi.

The winning streak looks set to continue. Last week, Anta Sports shared it is expecting profit to top 45 percent year-over-year growth for the year to Dec. 31.