The One-Year-Out line will support athletes such as skateboarder Heimana Reynolds.

Polo Ralph Lauren is doing its part to keep the Olympic flame burning.

Today, a year to the day from the planned Opening Ceremony, now rescheduled for July 23, 2021, the brand will launch a collection intended to help support athletes preparing for the postponed Games.

Called The One-Year-Out Collection, 25 percent of the proceeds from the 32-piece men’s, women’s and children’s line will be donated to the Team USA Fund, which provides training stipends, mental health counseling, illness and injury prevention, nutrition resources and other support to American athletes who hope to compete in the Games.

“One year out, it just felt like the right thing to do, especially in light of what was going on in the world,” said David Lauren, chief innovation officer of Ralph Lauren Corp. “There were discussions to wait until holiday or April or May, but one year out just seemed symbolic because there’s a hole in our hearts right now that there’s something missing in our lives. It’s not watching gymnasts do flips or basketball players shoot baskets, this is about the spirit [the Olympics] help inspire in all of us.”

The 2021 Tokyo Olympic and Paralympic Games will mark the seventh time Polo Ralph Lauren has been the official outfitter of Team USA.

“This partnership with the Olympics has been so valuable on many levels,” Lauren said. “But coming back to it every four years for two weeks didn’t satisfy the customers, our employees, the Olympics and our athletes.”

He said that after spending time with the athletes, the company realized that they “need support all the time. The American team is one of the few that is completely supported by the sponsors. Most of the teams are supported by their governments. Most of the athletes entering the Olympics don’t have a day job. They are very young and they need other resources. They need our support.”

Lauren said that a portion of the proceeds from the sale of every Olympics collection in the past has been donated to the athletes, “but we’re just highlighting it more. We were already planning to make this a year-round effort.”

He said consumers are always quick to embrace the product because they realize that their purchase helps support the athletes. But as a result of the pandemic, those aiming to compete in the Games now have another unexpected year of training — and costs — ahead of them.

“People were really looking forward to the Olympics, especially because it’s been such a complicated year globally and within our country. For everyone to come together and unify around the Olympics has always been incredibly symbolic,” Lauren said. “But this year, the value is truly exponential. I think what you’re going to see next year — if we’ve found a vaccine for the pandemic — the incredible value the Olympics are going to have for bringing hope, inspiration and unity, not just to America, but the entire world. And we’re just so proud to start lighting the flame now. It’s a flame we all need. Never before have we needed the hope, positive energy and spirit the Olympics bring.” 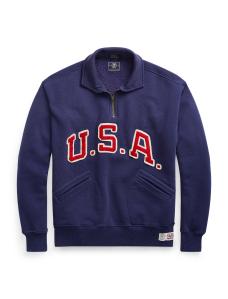 A women’s half-zip sweatshirt from the One-Year-Out collection.

The One-Year-Out collection, which includes T-shirts, hoodies, sweats and other athlete gear, will be sold on the company’s web site and in select stores and promoted through e-mail and word of mouth, Lauren said. The athletes have also received samples of the line, whose design was inspired by the Tokyo 1964 Games, and have begun wearing it. The line will also be available through Instagram Checkout on the athletes’ and brand’s pages.

“We know there’s always interest in this product and it’s been incredibly successful for us,” Lauren said. “What we will do is show athletes training and getting ready for the Olympics and that speaks for itself. There’s nothing like watching a real athlete do their thing.”

One athlete who has become a true fan of Polo Ralph Lauren is Heimana Reynolds, currently the top-ranked U.S. skateboarder, park. The 21-year-old Hawaii native, who is now living and training in the San Diego area, did his Zoom interview decked out in striped Ralph Lauren pajamas. 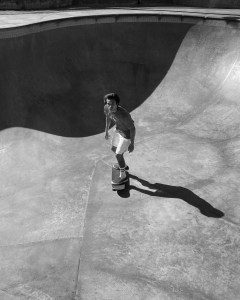 Since the Games were postponed before the U.S. skateboarding team was chosen, Reynolds’ winning streak came to an abrupt pause when the competitions, or contests, were halted as a result of the pandemic. He admitted to some initial disappointment, but then found the bright side.

“We’ve been looking forward to this for a while now, knowing that 2020 skateboarding is going to debut in the Olympics. Then they postponed it,” he said. “At first, I was hurt, I was bummed. But then I looked at it differently and said, ‘OK, this is what we have to do.’ They set a date so at least it’s not canceled. This is our new goal that we’re going to try and reach for. So, don’t worry, keep training, stay healthy, keep my mind strong and let’s get it.”

He said he now looks at the postponement of the Olympics “and the cancellations of all the traveling contests as an opportunity and have one year to be better than I was for the 2020 Olympics,” he continued. “I have an extra year to practice and train. I’ve been working out, my gym opened up, I have a personal trainer I meet with around four times a week and an at-home mini-gym that I work out in when I’m not over there. The skate park and the training facility all opened up again so that’s what I’ve been doing. I’m trying to keep my head space right and stay on my board.”

Although he hasn’t been selected for the team yet, he’s confident he’ll be in Tokyo next summer. “I’m sitting in first place with a good amount of points. I feel strong and ready that I can make the finals and hold my place.”

Although he’s confident about the strength of the U.S. team, Reynolds also knows there are no guarantees.

He has another year to perfect his craft, but that also means another year of bills. Although Reynolds said his parents taught him how to manage his money wisely, it’s still tough.

“I use a lot of the contest money I earn for traveling to other events,” he said. “I get money from sponsors and make sure I manage it well. When I go home to Hawaii, my parents have a family skate shop and skate park that we run clinics out of and I earn some money from that. And I just try to keep the ball rolling with anything I can do, like Instagram deals. I don’t go and buy the newest sports car that’s out there, I just use it for the mortgage, food and travel. It’s definitely not easy but we make it work.”

As a result, he’s grateful for some help from Polo Ralph Lauren. “It’s not easy, but to have the support from a company like Ralph Lauren is amazing and humbling and I’m blessed. I really appreciate what Ralph Lauren has done for me so far and I’m excited to see what more there is to come.”