Capsule was home base for the trade show scene’s cool kids this season. 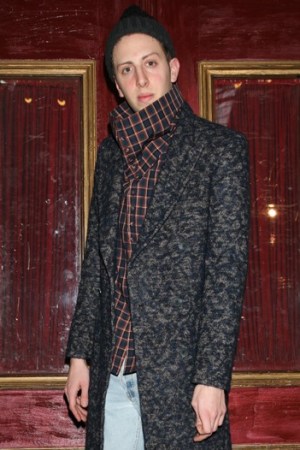 More than ever, Capsule was home base for the trade show scene’s cool kids this season. The show doubled in size to about 140 brands, despite the iffy economy, and was spread over two venues for the first time, the Puck Building and the Angel Orensanz Foundation Center.

“I think spirits are high and people are starting to see the light,” said Chris Corrado, sales director at BPMW, the showroom that organizes Capsule and also sells directional brands like Penfield, Public School and Shades of Greige. “Stores are underbought and buyers are looking for product. We’ve been fielding calls every day from stores asking for spring deliveries quickly or even looking to fill in from leftover fall product.”

Corrado pointed out that consumers targeted by Capsule’s progressive brands tend to be educated, style-conscious shoppers who may have been shielded from the worst effects of the Great Recession. “I think updating their wardrobe is an integral part of their lifestyle, and they’ve kept shopping,” he explained.

Still, those shoppers are looking for accessible pricing and value for the money, said many vendors.

“We’re aspirational but very affordable,” noted Huw Bennett, co-founder of Vanishing Elephant, a contemporary Australia-based label. The brand showcased slim suits with jackets retailing for $300 and trousers for $150, along with preppy knit polos with oxford cloth trim on collars and plackets.

The same could be said of the Timo Weiland collection, which included dramatic trenchcoats in lace tweed and hand-knit sweaters that flowed to the knees. The young New York-based designer has sold the line into 20 stores, including Barneys New York, Pas de Deux and Japan’s Takashimaya.

Tokyo-based Factotum showed for the first time in the U.S., via the Black Dog 8 showroom, with a lineup of coats with raccoon fur collars ($895 retail) and a range of denim, from raw rinses to tricked out and paint splattered ($220 to $500). Nearby, L.A.-based Simon Miller showed classic five-pocket denim in authentic worn-in washes ($225 to $425).

Playing up his homegrown roots, Marc McNairy — whose day job is design director for J. Press’ Japanese business — unveiled colorful silk taffeta coach’s jackets in his own collection, with “Jersey Fresh” emblazoned on the lining. Similarly, M.L. Brown & Co., a small leather goods maker, branded “Handmade in New York” on the interior of its belts, which retail for $110 to $165.

“I have a 1,600-square-foot garage in Gowanus, Brooklyn, with my own machinery,” explained the brand’s founder — and sole employee — Mathieu Brown. “I can make about 85 belts in a week if I stay focused.”