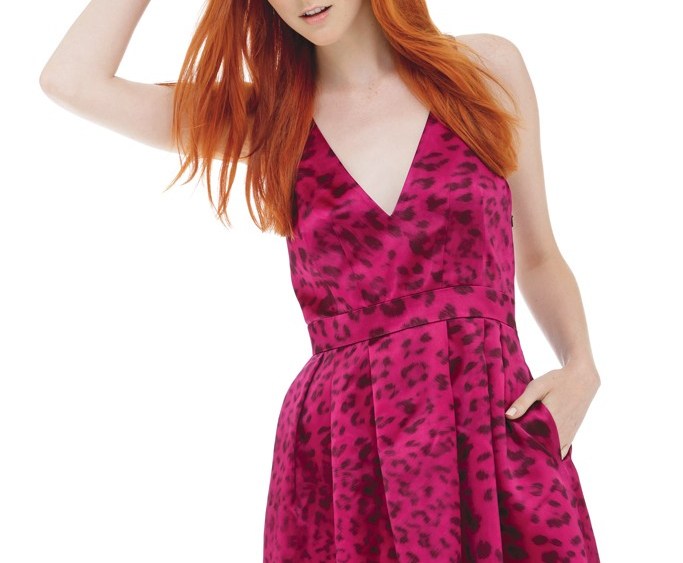 After earning a finance degree and working on Wall Street, Jay Godfrey turned his expertise in reading a market from stocks to fashion. Now, the fashion designer who started his namesake label in New York seven years ago has decided to make his debut on the Las Vegas trade show circuit at Project this week.

“A lot of buyers are buying for lifestyle as opposed to category,” said Godfrey, 32, who interned at Oscar de la Renta after leaving Wall Street. What sealed his decision to participate in Project (booth 8151)was seeing other contemporary brands such as Vince, Mara Hoffman and Alexis Bittar exhibit there during a visit last February. “Those are three brands that my customer wears,” he said. “There’s very much an idea of the show being a destination for buyers who are shopping for lifestyle.”

While Godfrey already boasts an enviable roster of luxury stores — Intermix, Nordstrom, Bergdorf Goodman, Neiman Marcus, Canada’s Holt Renfrew and Harvey Nichols in Hong Kong, to name a few — he hopes to meet regional specialty retailers that shop Project. Sprinkled among the styles from immediate deliveries and holiday, resort and pre-spring collections that he’ll present are bold, saturated prints inspired by the artist James Nares in teal green, lapis blue and shocking pink. Having staked his claim in silk dresses and blouses that retail from $200 to $600, he’s draping the slinky material into $325 jackets. He’s also continuing the high-low hem in tops and maxidresses for spring.

Designing for women between the ages of 18 and 35, he acknowledges that they’re searching simultaneously for value and fashion.

“These women are looking for items that aren’t everywhere, that are special and get them noticed,” he said. “They like clean lines but embrace color. They’re certainly not wallflowers.”

Whitney Port is expanding her ready-to-wear line Whitney Eve with an accessories line called Bits and Bobs by Whitney Eve. The collection makes its debut at Project in booth 8155. Ranging in price from $16 to $68 wholesale, the line, manufactured by Bijoux in New York, was inspired by Port’s own vintage jewelry collection.

“My mom and grandmother are major antiquers so I’ve had the luxury of going with them on trips and I’ve accumulated a large collection,” said Port. “I wanted to modernize that and put my spin on it.”

The mixed-metals collection includes chains and charms as well as pieces molded from lace and those engraved with a kaleidoscope print from the ready-to-wear collection. Some are delicate and meant to be layered while others are more statement pieces, such as a bronze triangle necklace, a halo headpiece or a wallet chain. Port, who will present her sixth rtw collection at New York Fashion Week on Sept. 12, admits she’s still learning, and that jewelry is a whole other “mishmash of knowledge.”

“By no means have I lived up to my highest standard,” she said. “It’s been an immense evolution.”

NEXT: BUILDING A NEW PATH >>

During four years as a civil engineer working on subdivisions, Rebecca Michaels realized she didn’t quite fit in with her colleagues.

“Engineering is a male-dominated field. I would be the girl coming into the male-dominated office with my cute outfit and my silver stiletto pumps,” she recalled. “I realized that I didn’t have a passion for engineering. I always loved fashion.”

Michaels found her opportunity to leave engineering behind for fashion in the form of a headband. An avid runner, Michaels decided to create versatile headbands to wear when she was active that she hadn’t come across in stores. Peddling the headbands under the brand name Violet Love (named for her favorite color), she landed a spot in 2006 at the trade show Surf Expo, her first foray into wholesaling, and earned an award for one of the top products at the show.

With Violet Love now carried in more than 1,000 American stores, Michaels thought it was time to flex her design muscle beyond headbands with a namesake brand. She is making her Project debut, in booth 7158.
Starting with a collection for fall this year, Michaels focused on bottoms to provide the foundation for the label. The debut collection features four bottom silhouettes, like yoga pants or leggings, each available in six to eight prints and four to six solid colors. The retail prices for the Rebecca Michaels brand range from $60 to $150.

“I’m a bottoms person,” said Los Angeles-based Michaels, 32. “I feel like having a strong bottom is such a statement piece. My fall line is very strong in printed bottoms. I work with a lot of high-count rayon that gives it a beautiful softness. It is a piece you can literally put on in the morning, wear to the gym and yoga, and throw on with a sexy pair of boots or heels to go out at night.”

Bottoms continue to be an emphasis for Michaels’ spring collection. She’s added another bottom silhouette she described as “fitted fashion pants.”

“I wouldn’t put it in the harem pants category. I wouldn’t put it in the lounge category. It is my take on mixing the styles together,” said Michaels, who pointed out she also creates tops to pair with her pants. Of the 15 or so pieces in the fall collection, only five of them are pants. A key item in the tops category within the collection, she said, is an oversize Dolman top with a slit in the back.

Although she’s left engineering behind, Michaels believes her background serves her well in her new profession.

“In engineering, you learn to pay strong attention to detail and that’s where a lot of my strengths lie,” she said, noting, “You’d be surprised how many ex-engineers turn into fashion designers and end up having these amazing careers.”

The hipster haven known as the Cosmopolitan of Las Vegas hotel is pushing the prep with Minnie Mortimer and tennis-inspired fashion brand Boast.

On the eve of Boast’s 40th anniversary, Project and W magazine are hosting a poolside runway show styled by socialite-cum-fashion designer Mortimer, who serves as women’s creative consultant for Boast, at the Cosmopolitan. Mortimer, along with her men’s counterpart Andy Spade, is giving her twist to the Palm Beach, Fla.-based brand that was founded in 1973 by former tennis pro Bill St. John and relaunched two years ago by a team of former prepsters.

Those who might question how this brand would fit in with the Cosmopolitan’s edgy, eclectic clientele don’t have to look further than Boast’s Japanese maple leaf logo that triggers double-takes for its uncanny resemblance to a particular illegal foliage. Irreverent, indeed.