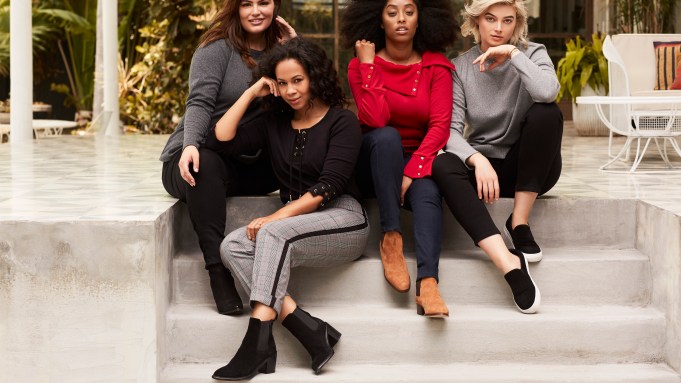 Body positivity and inclusivity are major themes at Rafaella, the better-price sportswear company, which focuses its attention on fit.

The brand, which continues to grow in a challenging environment, is designed to address the needs of women of all shapes and sizes. It is positioned at the opening price range of the better sportswear offer at department stores, with key accounts including Belk, Lord & Taylor, Stage Stores, Hudson’s Bay Co. and Boscov’s, as well as Amazon and Dia & Co., the plus-size subscription box.

While its distribution has been focused on department stores and their online channels as well as various e-commerce sites (it doesn’t have e-commerce on its own Web site), the company is changing the way it communicates with its customers.

“We’re focused on reaching our consumer in a digital/social media way that we never have before. It’s very grassroots and very authentic,” said Denise Miller, president of Rafaella, which is the largest women’s division at Perry Ellis International.

Miller said the sportswear brand has gone through some aesthetic and messaging changes and is well-positioned for the future.

“It’s almost like the re-evolution of Rafaella. We’ve been servicing her for many years now. We have a very loyal authentic customer,” said Miller.

Asked to describe who the Rafaella woman is, she replied,  “I don’t talk about age groups, It’s about sensibility. She’s an everyday woman. Some of them work. Some of them don’t work. She’s a mom, she’s not a mom. She’s a grandma, she’s not a grandma. She’s your real woman. She has a healthy, average income,” she said.

She noted that fit has always been a huge focus of the Rafaella brand, which is known for the fit of its pants, and continues to be. The company has established four pillars: Comfort, fit, versatility and value, she said. The collection targets women sizes 4 to 22, and incorporates petite, misses and plus sizes. For fall, the brand retails from $58 to $110, with some jackets higher.

“We’ve always been an all-inclusive brand. We were doing that before it became cool,” said Miller. The collection sits with such brands as Calvin Klein, Karl Lagerfeld, Isaac Mizrahi, Michael Michael Kors and Vince Camuto.

For fall, Miller said the brand is looking for roughly a 5 percent increase in business. “Our business continues to do well…We’ve enjoyed success at retail when times are good and when times are bad. We offer quality at a price, and fashion that is understandable and a consistent fit. It’s a question of how we evolve it. It’s that next evolution of who Rafaella is in this modern world, and how we continue to stay relevant,” said Miller.

She said Amazon and Dia are huge opportunities for Rafaella. It is also starting to open up overseas business. The company sells retailers in Mexico and Canada and is looking to sell directly in China in the near future.

Leo Sepulveda, vice president of design at Rafaella and Laundry, said his aim is to give a contemporary vibe to that better customer.

“The biggest focus is to make sure she [the customer] is staying  relevant in an understated way,” he said. He said he’s looking at the company’s prints, since the brand is print-heavy, and making sure they’re relevant. Plaids have been phenomenal for the company, and embellishment remains key. Hardware is also important, along with faux suede and ponte.

For fall, the company has developed an ad campaign that speaks to its customer through digital and social media.

The brand has developed the hashtag, #love the shape you’re in, and the fall campaign’s theme is, “Nothing Fits Better than Confidence.” Featuring a mix of models and influencers sizes 6-16, the campaign shows diversity in both ethnicity and sizing. The campaign features Khrystyana, a model and body-positive activist; Maria Gimena Gonzalez, another model and body-positive activist; Erin Sanderson, an actress and producer; and Shelah Marie Rhoulhac, an actress, model, director and advocate for women of color.

The idea behind the campaign was to interview the talent on the set about what’s important to them in terms of cultivating confidence. Some of the spreads feature the models’ quotes. For example, Sanderson says, “Confidence is being sure of yourself despite your flaws.” The campaign breaks next month.

“My whole job is to introduce storytelling to the brand in a new way and really bring life and dimension to the Rafaella woman,” said Jennifer D’Aponte, senior director of marketing. The company will advertise on Instagram, Facebook, department stores’ Web sites, and Rafaella’s Web site. Rafaella’s Instagram page is shoppable, bringing customers to department stores’ Web sites.

The media budget is up about 40 percent for fall. “We’re very much getting behind this,” said Miller.

Jenny Batista is the in-house creative director for the campaign, which was photographed by Melina Deya, Perry Ellis’ in-house photographer.