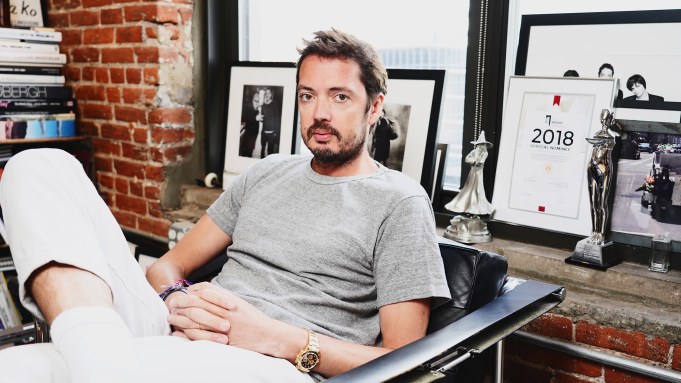 After a three-year hiatus, Rag & Bone will hit the runways Friday at 5 p.m. with a fashion show at Skylight on Vesey, a former stock exchange trading floor.

Having retreated from the semiannual fashion show scene, Marcus Wainwright, a founder of Rag & Bone, discussed the company’s current thinking and why it chose this moment to return to the runways.

“We’ve decided to show the clothes in a different way than we’ve done it before,” said Wainwright, who will feature a robot on the runway to project different views of the clothes. He said he pulled out of fashion shows for a number of reasons, one of which was that the format wasn’t relevant for him, although it is for other brands.

Basically, he said, he didn’t feel it was the ultimate vehicle to tell his brand’s story. “It’s a very effective way to highlight a collection, but it’s harder to tell a more complete story and generate different types of content we wanted to generate,” he said. The brand, he pointed out, has a very strong affinity for fashion, but also has an affinity for art, music, dance and video film.

Among some of the ways Rag & Bone has presented its collections the last three years were a series of portraits taken by photographer Glen Luchford in collaboration with Frank Lebon; “Hair,” a Rag & Bone Films production that premiered at the 2017 Tribeca Film Festival;  a project featuring self-portraits of an eclectic cast of characters linked to the world of Rag & Bone; a conceptual video that was celebrated through a sensory experience and dinner called “A Last Supper,” and “Time of Day,” a film shot over the course of six weeks by Greek cinematographer, Thimios Bakatakis.

But this time around he wanted to challenge the status quo of what a runway should be and could be. He looks to combine the experiential nature and content creation aspect to what they’ve been doing with the idea of highlighting the clothes on individual people.

The show, which will have two drummers, will blend fashion with music, technology and choreography, he said.

The robot has two cameras attached, one is a “human vision,” or a live-action feed, the other has a point cloud capture camera, which is the way in which a machine or computer sees the world. The robotic arm itself has been trained to follow models on the catwalk, moving at multiple angles and provide a real-time view of the collection, which is both AI vision and regular video. Wainwright said they are still working out details on how it will all play out.

“We’re getting better as a company. We have better product, which is probably number one. Most fashion businesses have experienced a monumental amount of change in the model they were used to and the model they were operating in during the last five years. It’s taken us quite a long time to professionalize the internals of the organization of Rag & Bone,” he said.

Explaining the brand’s trajectory since it launched in 2002, he said, “We grew very organically and had a lot of luck. We grew through naiveté to some extent. When you get to a certain size, the internal operations become more important. In the old days, you could get by by winging it. We’ve spent quite a lot of time building a great team.”

Wainwright handles all aspects of the brand, including the creative vision. He also relies on Andrew Rosen, who’s been an adviser and investor for a long time. “He has so much wisdom and experience and knows things that I don’t really excel in like mathematics. He’s very good with numbers and very good at things that I’m not good at,” Wainwright said.

Wainwright said he has no plans to bring in a new chief executive officer. “It’s hard to find someone who understands what we understand about the brand and the business, I would never say never,” he said. Rag & Bone, which has offices in New York, Los Angeles and London, employs 300 people, excluding those in the retail stores.

The company, whose investors include John Howard’s Irving Place Capital, hasn’t opened any stores in a while (its last U.S. store opening was Miami in December 2017 and last international store was Sydney in November 2018), which Wainwright said was a strategic decision to focus on the stores it had and become better retailers and better digital retailers. “There’s a lot of focus on the digital side. There’s a time and a place to open more stores, and next year, there will probably be a few more stores,” he said, citing such potential locations as Texas and the West Coast.

When it comes to U.S. wholesale, Wainwright said he’s looking to do more business with his current accounts. He said Nordstrom is its biggest account, and Saks Fifth Avenue and Bloomingdale’s “are great partners.” The company sees opportunity in international expansion. He said they have a strong business in Asia, Japan, South Korea and Australia. “Our European business is good as well. We’ve been through iterations of being in hundreds of stores in Europe, which is good but very challenging,” he said. While most of the business in Europe is wholesale, the company has three stores in London.

According to Wainwright, he spends a lot of time focused on the consumer, and who that guy or girl is. It’s Wainwright’s belief that clothes should mean something to people, they should be properly made and they should have a story behind them.

“Rag & Bone was in some ways in response to the fast fashion that was happening when we first started the brand,” he said of the brand he cofounded with David Neville, who stepped away from day-to-day involvement in 2016. “We wanted clothes that when you put something on, it makes you feel a certain way. Authenticity is one of the most important words that we use here. Everything we do needs to be authentic….These days the consumer is smarter than they’ve ever been in understanding what authenticity really means.

“Rather than fashion or trends being paramount, it’s never how we approached it,” said Wainwright, who didn’t go to fashion school. “Fashion is more about how you feel than how the clothes make you look,” he said.

Which brings up the topic of sustainability, which Wainwright said they can’t do enough. “Clothes should last and shouldn’t be disposable. They shouldn’t go to a landfill. You shouldn’t wear them once or twice and they’re done,” he said, pointing to his father’s handmade suit jacket, which was made in 1953, draped on a chair in his office. “He wore it, I’ve worn it at school. It’s the model for a number of different pieces.” Then he pointed to his grandfather’s tweed jacket. “That to me is sustainability. We are, as a company, heavily exploring organic,” he said.

The company does jeans recycling for housing insulation and planted 22,000 trees in Peru, one tree for every transaction during Black Friday. A large amount of the company’s production is in the Garment District, and Rag & Bone is also the largest denim producer left in Los Angeles. “It’s difficult to sustain domestic manufacturing,” he said. “I’ve stuck with it, but it’s hard. I tried to make everything in Kentucky and that factory closed. I moved to North Carolina, and that factory closed.”

Wainwright said the company’s strongest category is denim, and its T-shirt business “is very very strong.”

“We have a very broad business. You can go into Rag & Bone and you can buy a shearling jacket, fragrance, sunglasses, a T-shirt or a pair of jeans or shoes or bags. One of the reasons we’ve sustained the momentum of the business is because it’s broad,” he said. “Tailoring is very strong at the moment in women’s. Our tailoring business has been strong since we started.”

Asked whether it’s important for a company like Rag & Bone to start thinking more like a tech company, he replied, “I think technology is a vital part of the fashion business these days. I personally believe that Rag & Bone is always going to be a brand that balances technology with the analogue experience, touching and feeling something, experiencing beautiful imagery shot with an analogue frame of mind. Authenticity is something that human beings fundamentally need,” Wainwright said.

With 17 years under his belt, Wainwright reflected, “I feel like an old man in the fashion world. We’ve been doing this for a while. We’ve been through a lot from being a start-up and packing boxes in an empty warehouse in Brooklyn. We’ve been through the ups and down. We’ve had a lot of luck and relative success.”

Which brings us back to the fashion show, which was originally scheduled at The Shed but then switched to Skylight on Vesey, for reasons Wainwright didn’t want to discuss.

“I’m excited to be doing something closer to a fashion show. I wouldn’t necessarily describe it as a fashion show. I think the idea of people coming to experience Rag & Bone is a fun one to contemplate — to try and challenge ourselves of what a fashion show could be. How they experience what we have to say is interesting. I’ve been out of the loop for a while and it’s been kind of fun to explore and try to come up with something.”